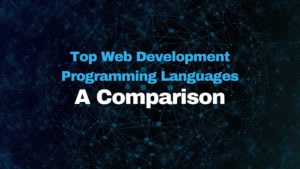 The software development industry is growing at a break-neck pace. Currently, there are close to 19 million software developers in the world, and this number is expected to double by 2030.

If you are someone looking to break into the industry, the first step is to learn and understand the different programming languages and the unique purposes they serve.

There are hundreds of different programming languages in use today, however, the eight we’ll be exploring in the list below are some of the most widely-used and in-demand for an array of job titles, namely software development, mobile development, and game development.

In this article we’ll compare and contrast:

First, let’s recap the difference between a language and a framework. A language is syntax, grammar, semantics (and sometimes a core library) that implementers are required to support. A framework is an additional cohesive set of code that provides high-level tools for programming in any given language.

JavaScript is (primarily) a front-end programming language used to create interactive effects within web browsers, and is basically the only way to get stuff done in the browser. JS is used to seamlessly display information that does not remain static on a web page. JavaScript helps with timely content updates, interactive maps, animated graphics, scrolling videos, etc.

The large majority of today’s software developers use JS on a very regular basis. In fact, this programming language was ranked most popular among developers going on eight years in a row.

JS is often associated with TypeScript, a syntactical superset of JS that adds optional static typing to the language.

Luckily, the ever-popular JS is also one of the easiest programming languages for beginners to learn due to a forgiving, and flexible syntax that works across almost all browsers. Because of its immense popularity, it is advised by industry professionals that anyone looking to enter into software development learn JS.

Although JS is most often used for front end development, it can also be used on the server-side through Node.js.

Go, also known as “Golang”, is an open-source programming language primarily used to build simple, reliable, and efficient software. This statically typed, compiled programming language was designed by a team of professionals at Google in 2007 (making it one of the youngest languages on this list).

Go was built as an alternative to C++ and Java driven by the needs of Google’s app developers to serve their network servers and distributed systems. Since then, Go has expanded to meet the needs of many programmers working on large projects.

Thanks to its simple and modern structure, Go is quite easy for new developers to learn, as shown by its quick growth in popularity. Syntactically, Go is very similar to C (discussed below), but with the additional features of memory safety, garbage collection (which can detect and clear wasted disk space), structural typing, and CSP-style concurrency.

Go is incredibly popular with back-end developers due to its inherently simple, readable, and maintainable code. It is currently used by companies such as Uber, Twitch, Soundcloud, and others.

Ruby is a programming language and Ruby on Rails is an open-source web framework that, like Go, is fairly new to the programming game. Rails is a model–view–controller framework, providing default structures for a database, a web service, and web pages. It is most often used to create web apps.

There’s a wide variety of libraries called ‘ruby gems to use as resources to help speed the development process along. In fact, developers who use Ruby on Rails can build applications about40% faster than teams that use other stacks.

Rails has a lot of built-in implicit behaviors that are designed by the framework, which removes the need for the programmer to specify each one.

Rails abstracts and simplifies common repetitive tasks, so programmers are able to write less code and in-turn, save more time.

Some say learning Rails can be difficult because there are many independent concepts to grasp. However, if you already have an understanding of the Ruby programming language that can help lower the learning curve for Rails.

It’s important to note that security and debugging can sometimes be difficult with Rails, especially when dealing with slightly more complex application requirements.

Rails is used by companies running the gamut from small start-ups to giants like Twitter, Hulu, GitHub, Groupon, and more.

Nowadays, Python is often the first language taught to programming students in school, mainly due to its simple and straightforward syntax.

One of the primary reasons for Python’s quick popularity growth among programmers is that there is no shortage of scientific and mathematic libraries to use with it. Python is used to accomplish many things from building web applications to machine learning.

Traditionally, Python has been very widely used in the following industries:

Though Java has been taking a backseat to the growth of languages like Rust and Go, Java is still one of the most preferred languages for building the back-end of modern applications.

This class-based, object-oriented programming language is designed to have as few implementation dependencies as possible. Most often Java is used to build large enterprise class applications, which makes it a great fit for corporate environments, or building large scale systems.

Java is not a popular choice for small scale projects, but can still sometimes be used in certain cases.

Many tout that Java is much easier to learn than the likes of C or C++. However, it can be more difficult for new students to learn than languages like Python due to Java’s relatively verbose syntax.

Java is the primary language used by some of the most influential software companies around, including IBM and Oracle. In addition, most native Android apps for smartphones and tablets are coded in Java.

In layman’s terms, C# is a programming language that aims to combine the computing power of C++ with the programming ease of Visual Basic. It was designed by Microsoft to work within their “.NET” framework.

While many get C# confused with languages of a similar name such as C and C++, C# is more similar to Java and Go in terms of speed and use case. C# is often used for backend development in a Windows environment.

Because Elixir is built on top of Erlang, Elixir is able to leverage any Erlang library, which means that developers have a lot of resources to fall back on.

Elixir was born by leveraging lessons learned from languages like Ruby with the runtime characteristics of Erlang. Many use cases that are not inherently sequential or CPU-bound can benefit from the features of Elixir.

Many well-known companies use Elixir for a wide variety of uses. Pepsi uses Elixir for marketing automation and supply chain optimization. Pinterest utilizes Elixir to speed up the performance of their notification system. Moz switched to Elixir from Ruby in order to use smaller data files and improve the speed of their API.

PHP is a free and open-source general-purpose scripting language best suited to web development. Created by a Danish-Canadian programmer in 1994, The PHP reference implementation is now produced by The PHP Group.

PHP is a server-side scripting language. It is primarily used to develop static websites or dynamic websites, and web applications. Many know that PHP stands for ‘Hypertext Pre-Processor’, but it is less known that it previously stood for ‘Personal Home Pages.

PHP is considered one of the easiest programming languages to learn, assuming the student already has an understanding of HTML. It’s important to note that without knowing HTML before starting to learn PHP, the process can be much harder. Therefore, it’s advised to know HTML basics before diving into PHP.

I personally am not a fan of PHP and consider it outdated. I largely agree with the famous article, PHP, a Fractal of Bad Design.

PHP is used to build a variety of webpages including simple WordPress websites to way more complex web platforms like Facebook. Flexibility, nativity, multiple integration opportunities and high speed are among the main reasons companies like to use PHP in their web projects.

As you can see from this list, there’s not necessarily any best web development languages or best web pr_o_gramming languages for new developers to learn. It strictly depends on the needs and uniqueness of each project. However, being familiar with several of these basic and popular languages can help shape a more well-rounded and more successful development career.

Javascript mistakes that beginners do