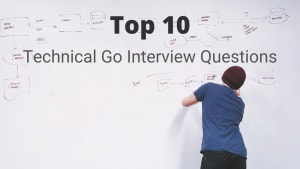 Are you interviewing for a new Go developer position? Perhaps you are about to interview someone yourself? Let’s review some good questions to be familiar with, whether you are the interviewer or the interviewee.

If you are interested in a more interactive way to review for a Go interview, try our Interview Prep – Go course. You’ll find more questions and will be able to run code in the browser and get instant feedback on your level of preparedness.

1. What is the difference between a goroutine and an operating system thread?

2. Can constants be computed in Go?

3. What does the Go ecosystem use for package and dependency management?

Until recently the GOPATH setup allowed developers to import packages as long as they were in the local Go workspace. As of Go ~1.13 it is considered best practice to use the go mod setup where source code isn’t required to be a part of the GOPATH.

Go doesn’t use a package manager like NPM or Cargo. The Go toolchain provides commands like go get for fetching external dependencies straight from their Git source control repositories, and go mod for managing the dependencies of a specific project.

4. How would you succinctly swap the values of two variables in Go?

5. Do you have any preferences for error handling methodologies in Go?

Errors in Go are an interface type, where any type that implements the single Error() method can be considered an error:

Whenever a function has a possibility to go wrong, like a network call or a type conversion, the function should return an error as its last return variable. The caller should check the error value, and any value other than nil is considered an error.

Idiomatic Go developers should prefer guard clauses over if-else chains, especially when handling errors. Errors should also be wrapped in a meaningful way as they are passed up the call stack if appropriate.

6. What is a pointer and when would you use it?

A pointer holds the memory address of a value.

Pointers can be used to:

The normal mutex locks data so that only one goroutine can access it at a time.

8. Consider the following code. What will be the value of s1?

When slicing an existing array or slice the first index is inclusive while the last index is exclusive. If an index is omitted on one side of the colon, then all values until the edge of the original slice are included in the result.

10. How would you sort a slice of custom structs?

I would build a new type that represents a slice of that struct type. For example:

Then I would fulfill the standard library’s sort.Interface:

I would then be able to use the sort.Sort function: