Declaring Functions:
functions can declared by using the function keyword, followed by the name you wish to give a function, parenthesis, and curly braces like so:
function namedFunction () {}
inside the parenthesis, you can add parameters. the names of these parameters can be anything but they should represent the data that you'd expect someone to input into this function if they were using it. Let's say we were creating a function to find the area of a rectangle, which is length times width. We can add two parameters named len and wid. like so:

function rectangleArea (len, wid){}
now inside your curly braces is where our code will go.

And there you have it! We have successfully declared a function.

Anonymous functions:
Functions don't necessarily need names. Instead, we can assign the function to a variable in a method called a function expression. Take our previous example, instead of naming it, we could have instead assigned it to a variable like so:

Anonymous functions can be useful if you don't need to reference it later on. However, you can still provide a name so that it can be easily called for future uses.

Calling Functions:
Whether or not the function is named, we can still call them in a similar fashion. We just need to enter the name of the function, or the name of the variable if it was declared anonymously, as a keyword followed by the arguments. arguments are what we input in the parenthesis of the function, they take the place of the parameters we discussed earlier and can be any datatype, be it simple (like strings & numbers) or complex (like arrays and objects).

Now its time to talk about scope- and no, i'm not talking about the mouthwash brand. function scopes define the limits of what can reach the variables inside of a function and also what variables that same function can reach outside of itself. First, you should understand that global scope, which is the window that encompasses all of your code. Any variable declared in the global scope can be accessed within any function or code block.

In the example above, the function is able to access the variable x, which was defined outside of its own function scope. It is successful because variables defined in the global scope can be accessed from anywhere.

now lets see what happens when we do the opposite- try to access a variable inside a function's scope from the global window.

As you can see, we get a reference error: y is not defined. This is because the variable y is inside of a specific function's scope, and therefore can only be accessed within that function. 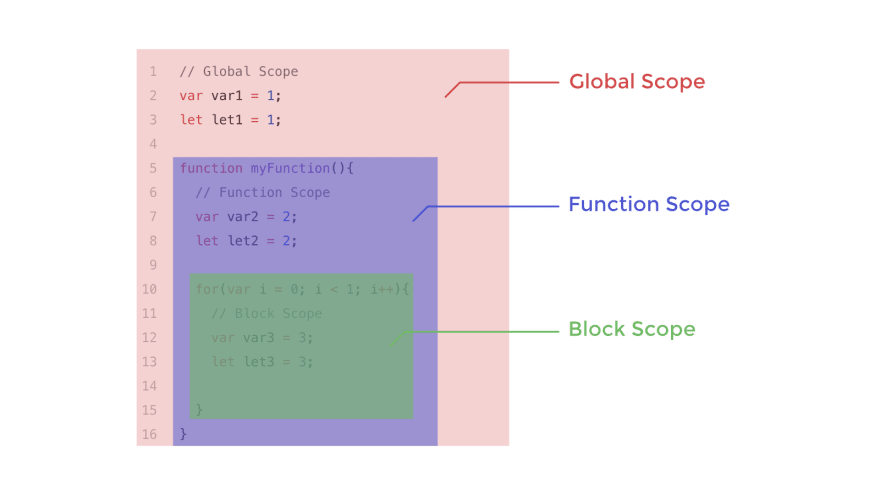 The image above should demonstrate the boundaries scopes can set. The formatting is very similar to that of a nested russian doll.

Conclusion:
To summarize, functions are the building blocks of our code. Without them, nothing would get done, literally! Being able to create your own functions and be able to use them anywhere in your code is the first step to becoming a successful programmer.

Functions can become much more complicated, but what we learned today will be a great starting point for understanding future topics. Stay tuned for more to come!

Bun.js - Fresh JavaScript runtime out of the oven 🧑‍🍳

Once suspended, vkton115 will not be able to comment or publish posts until their suspension is removed.

Once unsuspended, vkton115 will be able to comment and publish posts again.

Once unpublished, all posts by vkton115 will become hidden and only accessible to themselves.

If vkton115 is not suspended, they can still re-publish their posts from their dashboard.

Once unpublished, this post will become invisible to the public and only accessible to Vincent Tong.

Thanks for keeping DEV Community safe. Here is what you can do to flag vkton115:

Unflagging vkton115 will restore default visibility to their posts.