About a year ago I had to solve a challenge for a hiring process and I didn't pass. Time has gone by and I was curious about how I'd write this code today.

These do's and dont's are based on what I learned in the past year and understood as best practices for writing code.

But before anything, a little context. At the time that I did this interview, I was really into functional programming (and still am), but like anything you're learning for the first time, I had some misconceptions. For instance, believing that just because I isolated my concerns and all of the functions were decoupled I had "mastered functional programming and clean code".

But I couldn't have been more wrong. Because while I did have some of those good practices in use, I broke other basic principles of Clean Code. While I knew the core concepts of functional programming, I didn't master the basics first - and I strongly believe that if I did I would've passed that test.

Something that bothered me and made the process of understanding that script so much harder was the fact that I dealt with data only in arrays. For example:

That led to this kind of code:

Now, don't get me wrong, this is not the end of the world but... what? I had to read this piece of code one or two times before I could understand it completely, and this is a major no-no.

I believe that code should be as closely related to a narrative as possible. That's what this particular piece of code violates. What's inside user[1]? I don't know. Only if I go back to the line where I call getBestReview() and pass users as a parameter, I'll have a better sense of it. This is what we should avoid. 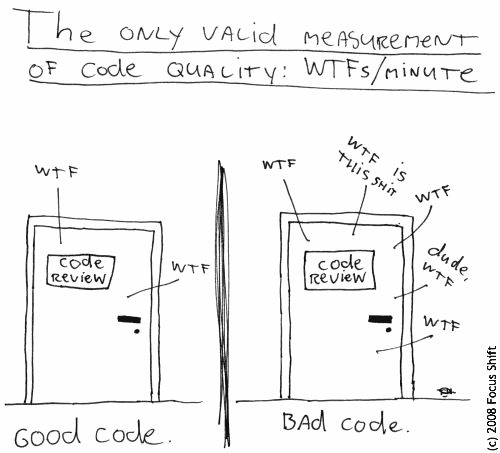 By choosing to use arrays for the sake of performance I violated another rule we definitely should always follow, "Keep it simple, stupid!" (KISS).

This is a pretty straightforward line of thinking, so I won't spend too much time explaining what it means. But let's just say that I wouldn't be processing a lot of information to worry about this kind of thing at the moment. Just stick to what you know you've got right now, and keep the code simple!

What would've solved this problem quite easily would be to use arrays of objects. Like so:

Another thing that I noticed is that while the constant name is getBestReview() I didn't return the best review, but the user that had the highest rating review. That violates another good practice that is: Name your variables, your functions, classes, etc, according to what value or operation they perform/keep.

This is crucial for maintaining the other principle I introduced above, that the code we write should assimilate as closely as possible to how we would sound like if we tried to tell other people what that particular piece of code does. Therefore, take your time to name your variables!

Another topic connected with readability is how we pass our function parameters. Take this code:

The function calculateUserInfluence() actually has a good name on it, considering what it does, but let's focus on the parameters that we are passing. First, we pass getReviewRating(), and assuming that it does what it seems to do (something that we noticed we can't trust), we also pass another function, getUser() as a parameter inside getReviewRating().

That made me pause for a moment, and go check what those functions return. Because of this moment where I went searching for extra meaning at four different places on the script, I already wasted some precious time.

This may appear small at this scale, but if we get used to this practice, the maintenance of a more complex system can become a difficult job.

But how can we solve it? Easy! Store those getReviewRating,getUser,getTypeOfReviews inside variables with names that provide more context on what those functions return and how that relates to the parameter that calculateUserInfluence needs. Like so:

While I believed that because I used functions everywhere and passed almost everything through parameters I was writing code that followed the functional paradigm, I missed another important rule.

I wrote every function that was used to process the input and give an output in the same index.js file. And this violates another good practice that is: separate your concerns. Next I'll try to demonstrate what that means:

If the purpose of the challenge was to get the highest rating review from a list of users, I shouldn't include a helper function like capitalizeFirstLetter() inside the same file.

They should be separated so when reading the code for the first time, that helper method wouldn't pollute the readability of my script.

Separating concerns also helps in the understanding of your code, so the next developer that needs to work on a particular section of the business logic to add a new feature or even find a bug will have a much easier job while doing so.

This isn't a must, but a little sprinkle of salt on top of a sweet recipe.

Something that I also missed while reading the code was a bit more context about the function parameters. While this is a problem that could've been avoided by using JSDoc, I prefer using Typescript because it also serves as a static type checker.

So Typescript would solve two of our issues:

These advantages help us to improve our code maintainability and delivery confidence. In the long run, understanding every i/o in each method is much simpler with Typescript because it forces you to provide more context in each value that's being expected on those parameters, and what it returns.

When I submitted the challenge I was pretty confident that I'd pass the test. I used:

But my code lacked some very basic principles like:

Studying the functional paradigm did give me a new perspective on writing code and nudged me in the right direction to improve my coding skills, considering that it forces you to be more aware of important things like:

But I lacked some very basic ones that for sure demonstrated my lack of experience at the time. If there's one piece of advice that I'd like to send with this article is this: Understand the importance of basic code principles, those will make you stand out more than saying that you apply fancy paradigms to your code.

Tech-Philosophy - The day of a software developer