AWS Elastic Beanstalk supports two types of Environment:
● Web Tier Environment
o This application hosted on the Web Server Environment handles the HTTP and HTTPS requests from the users.
o Beanstalk Environment: When an environment is launched, Beanstalk automatically assigns various resources to run the application successfully.
o Elastic Load Balancer: Request is received from the user via Route53 which forwards the request to ELB. Then ELB distributes the request among various EC2 Instances of the Autoscaling group.
o Auto Scaling Group: Auto Scaling will automatically add or remove EC2 Instance based on the load in the application.
o Host Manager: Software components inside every EC2 Instance
which is responsible for the following:
▪ Log files generation
▪ Monitoring
▪ Events in Instance 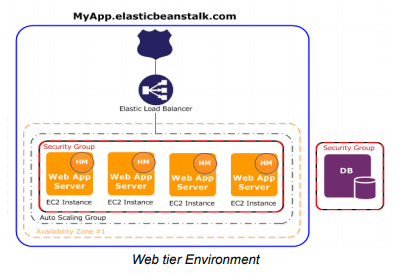 ● Worker Environment
○ A worker is a background process that helps applications for handling heavy resource and time-intensive operations.
○ It is responsible for database clean up, report generation that helps to remain up and running.
○ In the Worker Environment, Beanstalk installs a Daemon on each EC2 Instance in the Auto Scaling Group.
○ Daemon pulls requests from the SQS queue and executes the task
based on the message received.
○ After execution, SQS will delete the message, and in case of failure, it will retry to send the message. 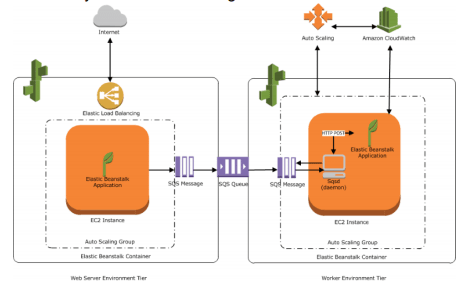 Pricing:
● Amazon will not charge you for AWS Elastic Beanstalk.
● Instead, you will be paying for the resources such as EC2 Instance, ELB and Auto Scaling group where your application is hosted.

Once suspended, viv92945316 will not be able to comment or publish posts until their suspension is removed.

Once unsuspended, viv92945316 will be able to comment and publish posts again.

Once unpublished, all posts by viv92945316 will become hidden and only accessible to themselves.

If viv92945316 is not suspended, they can still re-publish their posts from their dashboard.

Once unpublished, this post will become invisible to the public and only accessible to Vivekanand Gujjeti.

Unflagging viv92945316 will restore default visibility to their posts.