What is big O notation and algorithm efficiency?

Algorithm efficiency is the ability to solve a problem in a reasonable time and with efficient use of computational resources such as processing and memory. Big O notation is a way of measuring the efficiency of an algorithm, describing the asymptotic behavior of a function. This means that we can evaluate the rate of growth of the function, comparing it to other algorithms.

Big O notation is represented by the letter O and is used as follows: Θ(f(n)), where f(n) is the measure by which the size of the input (n) increases. For example, an algorithm that grows quadratically, that is, increases proportionally to the square of each additional input, is represented by Θ(n²).

Suppose you have a list and need to find a certain element 'x'. This algorithm is called sequential search.

Another example is when you need to sort a list. This algorithm is called insertion sort.

The advantage of this approach is that, in case of larger arrays, the code will run faster, as the number of iterations is proportional to the size of the array. This makes the time complexity of the code limited by the size of the array, resulting in a less steep growth chart compared to a code with quadratic complexity. In other words, the first code is more performative and efficient in situations where the array can be very large. 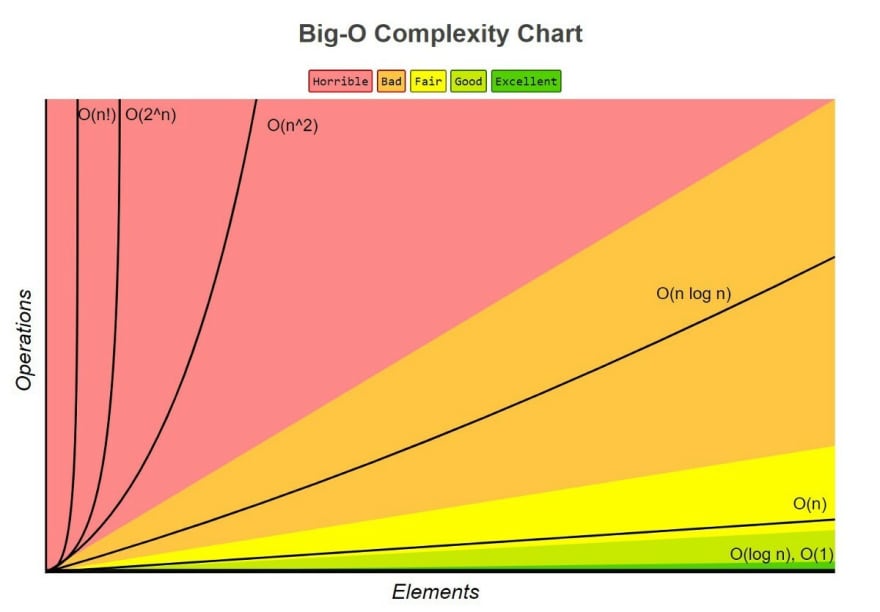 The implications of this complexity are that, in larger arrays, the growth chart will be steeper, resulting in slower and more complex code as the input gets larger.

Suppose you receive a list of numbers and need to find a certain number x in the list. To do this, you can use the binary search algorithm, which has complexity O(log(n)).

Another example is when you need to sort a list of numbers in a logarithmic way. To do this, you can use the merge sort algorithm, which has complexity O(n log(n)).

These algorithms are more performative and efficient than linear or quadratic approaches in situations where the size of the input can be very large.

Both examples are valid, but they have different time complexities. The first one is O(log(n)), which means that the running time increases logarithmically with respect to the size of the input. In other words, in the worst case, if the array has 8 elements, the algorithm will be executed 3 times. For example: log2(8) = 3.

The second example, O(n log(n)), is a notation that indicates that the running time of an algorithm increases proportionally to the product of the size of the input data and the logarithm of that size. This means that, in the worst case, if the array has 8 elements, the algorithm will be executed 24 times. For example: 8 * log2(8) = 24.

For those who want to delve deeper into the subject, I recommend reading the book “Introduction to Algorithms” by Thomas H. Cormen.

Top Developer Communities to Join in 2023

Once suspended, vit0rr will not be able to comment or publish posts until their suspension is removed.

Once unsuspended, vit0rr will be able to comment and publish posts again.

Once unpublished, all posts by vit0rr will become hidden and only accessible to themselves.

If vit0rr is not suspended, they can still re-publish their posts from their dashboard.

Once unpublished, this post will become invisible to the public and only accessible to Vitor.

Thanks for keeping DEV Community 👩‍💻👨‍💻 safe. Here is what you can do to flag vit0rr:

Unflagging vit0rr will restore default visibility to their posts.