The Block, Element, Modifier methodology (commonly referred to as BEM) is a popular naming convention for classes in HTML and CSS. Developed by the team at Yandex, its goal is to help developers better understand the relationship between the HTML and CSS in a given project. 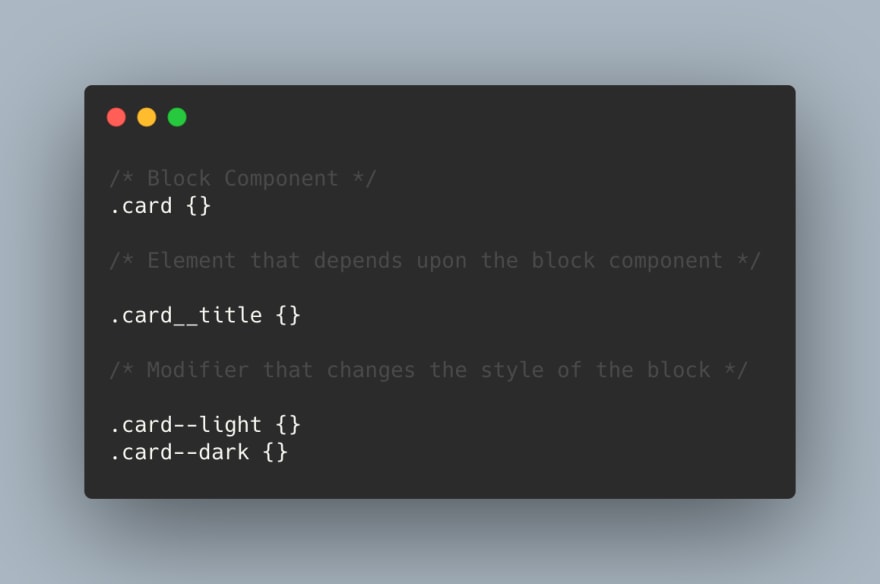 Block : A top-level abstraction of a new component, for example a card: .card {}. Think Block as PARENT

Elements: child items can be placed inside the block element. For example .btn__title {}. Think Elements as a CHILD.

Modifiers: can be used to manipulate the block so that we can theme or style that particular component without inflicting changes on a completely unrelated module. For example .card--light {} or .card--dark {}

So if another developer look at this code who's not familiar should get a good idea of which classes are responsible for what and how they depend on each other. So developers can add many different combinations of cards simply changing a class in the markup

Intro to reactiveUtils in ArcGIS JSAPI

How to Secure Webhook Endpoints with HMAC

Day 47: Will be back tomorrow

Vishang
Front end developer
What are your favorite language and library or framework for it?
#discuss #programming #webdev
Does it bother you when programmers use the word "Arguments" and "Parameters" interchangeably ?
#discuss #career #webdev #watercooler
⛔ Squash commits considered harmful ⛔
#programming #productivity #tutorial #git