This post is part of today's Supabase Content Storm ⛈️ in preparation for their upcoming 6th #SupaLaunchWeek.

Brick is a Real Estate investment calculation tool with an integrated marketplace to share and find investment objects from others to invest to. We offer calculation support for Buy & Hold, Fix & Flip and new building. There are many Excel templates on the internet, but they don't work great on mobile and are often somewhat limited. So we created Brick, a Flutter app which works on Android, iOS and Web.

Supabase markets themselves as an open source Firebase alternative. They combine and extend existing open source software like PostgreSQL, GoTrue, Kong and Deno to provide a Postgres database, Authentication, Storage and Edge Functions. They offer official client libraries for JavaScript and Flutter (Dart). Learn more about them in their documentation.

One of the first BaaS (Backend-as-a-Service) on the market and the most popular is Firebase by Google. They provide client libraries for Android, iOS and Web for a long time. Firebase offers much more individual features than Supabase, but the key features Database, Authentication and Storage are most important for the platform decision. We actually started with Firebase because it's known from previous projects and well established as BaaS, but we switched while being still in development to Supabase for a couple of reasons.

How we use Supabase

Each user does not only have an email and password, which are stored in the auth.users table, but also a username, full name, website, etc. The auth schema is managed by Supabase itself, so we don't add new columns into the existing auth.users table. Instead, we add a new table in the public schema called profiles. Each row is referenced to the auth.users table, thus guaranteeing data integrity. We have triggers on the auth.users table for row deletion and inserting. On insert, an empty row is inserted into the profiles table in case the profile information insert fails on the client. On deletion, we delete all associated objects and their photos and documents from storage, as described later on.

One advantage of NoSQL databases is their flexibility. You don't have to carefully plan your schema, which can sometimes be very handy. At Brick, we faced such situation: On the one hand, every object has the same attributes like owner, name, created_at, type. On the other hand, each object type (Buy and Hold, Fix and Flip and new building) has their own individual fields and types.
To combine these requirements, we came up with using the JSONB type for storing flexible data. This gives us the power to store same fields in the schema and flexible fields in a column of type jsonb. Supabase just published a great blog article about this approach. 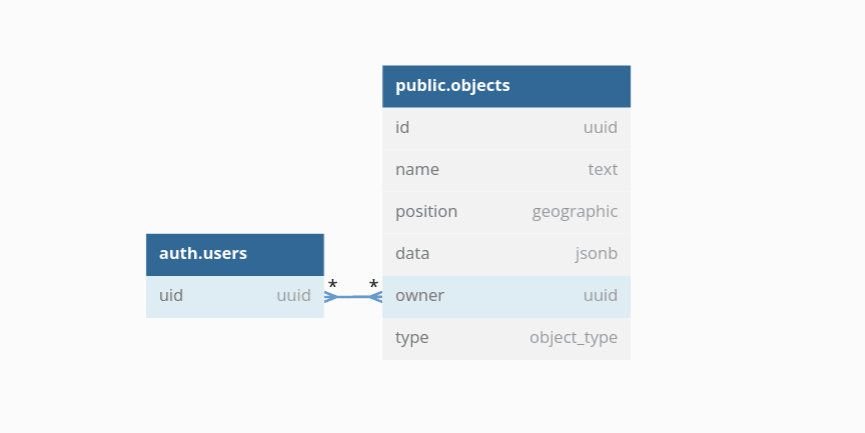 But can I use them in a query, one might ask. Of course, you can: Such as querying the rent of each object.
Let's say the data column has the following format:

-> Extracts the JSON object field with the given key, while ->> extracts the field as TEXT.

We are using Supabase Storage currently for three things:

We currently don't make use of Supabase Edge Functions, but plan to do so in the future. A new feature will be generating PDFs from your object's data to take your numbers everywhere you go.

Supabase uses Deno Deploy to deploy functions to the edge in Typescript. With Deno now providing npm compatibility this will be easy to implement. No more need for Firebase Functions.

Beside Edge Functions, we use all core Supabase features and see how well they work together. They are all rooted in the postgres database, allowing to control and view them from the heart of Supabase: The PostgreSQL database. In Firebase, each feature works individually well too, but are not interconnected. Despite the great Dashboard, Supabase still needs SQL to be managed. Each developer has to decide themself whether they are willing to invest that extra effort or not, but for Brick this was a great decision.

In addition, Supabase is by far not finished and still massively developing. Next week Dec 12 - 16 they host their 6th #SupaLaunchWeek, where they ship new features every day. So stay tuned on what they are going to deliver.

Thanks for reading! This was my first article and I hope you enjoyed it.

How to use enum in dart

Vinzent
Hey 👋 , I'm currently studying at RWTH Aachen University 👨‍🎓 . In my free time, I'm building apps with Flutter and plugins for Obsidian.md.
5 Life-Changing Lessons I Learned From Being Laid Off That Will Put You Ahead Of 97% Of People
#beginners #productivity #motivation #codenewbie
Music Monday — What are you listening to? (60's Edition)
#watercooler #discuss #music
Git Commit Patterns
#git #beginners #tutorial #productivity

Once suspended, vinzent will not be able to comment or publish posts until their suspension is removed.

Once unsuspended, vinzent will be able to comment and publish posts again.

Once unpublished, all posts by vinzent will become hidden and only accessible to themselves.

If vinzent is not suspended, they can still re-publish their posts from their dashboard.

Once unpublished, this post will become invisible to the public and only accessible to Vinzent.

Thanks for keeping DEV Community 👩‍💻👨‍💻 safe. Here is what you can do to flag vinzent:

Unflagging vinzent will restore default visibility to their posts.