SSH is a very powerful way to access remote servers. Learn how to easily setup SSH in your system.

This article was originally posted here

There are probably hundreds, even thousands of articles on this topic. And that's precisely the reason why it can also get daunting, confusing, and borderline nauseating to understand how to setup, much less use SSH as a beginner.

This post is aimed to be a no-nonsense, no-fluff guide to creating multiple SSH keys for difference Git based accounts like GitHub or BitBucket, and manage all of them easily, simultaneously.

Disclaimer: This is not an expert guide, and the steps here are simplified to ensure all levels of developers can follow. In case of any discrepancy or incorrect steps, please let me know in the comments and I would be happy to correct.

It is recommended to complete the below steps from beginning to end for one key and then repeat the process for all keys thereafter.

If you need a clean slate and start setting up everything afresh, delete the existing entries with this command -

Note that this will only delete the manual entries previously done by you and not the ones automatically added by other agents/tools. To ensure that the .ssh folder is empty, simply delete the contents of the folder like you normally would.

Files beginning with a dot '.' are irrelevant in this context. SSH key names look like this -

Type in this command to generate a new SSH key -

Meaning of different flags in the above command -

Once entered, the above command generates the SSH key. Make sure you enter a unique name within the path, else the file name will default to id_rsa. Your screen should resemble like so -

Nothing fancy; simply go inside the .ssh folder with cd .ssh and create a file named known_hosts_yourkeyname. This helps you easily diagnose issues should they occur in future. Use the command below to create it -

Leave it untouched after this.

The config file is used to define and set options for each key and its corresponding host. Open the .ssh folder in your preferred editor and create a new file named config (without any extensions) and paste the following lines into it -

Here is a brief breakdown of what each line means -

For a default SSH key which is usually a personal one, keep the HostName entry the same as the Host. For work SSH keys, you can modify the HostName like so - 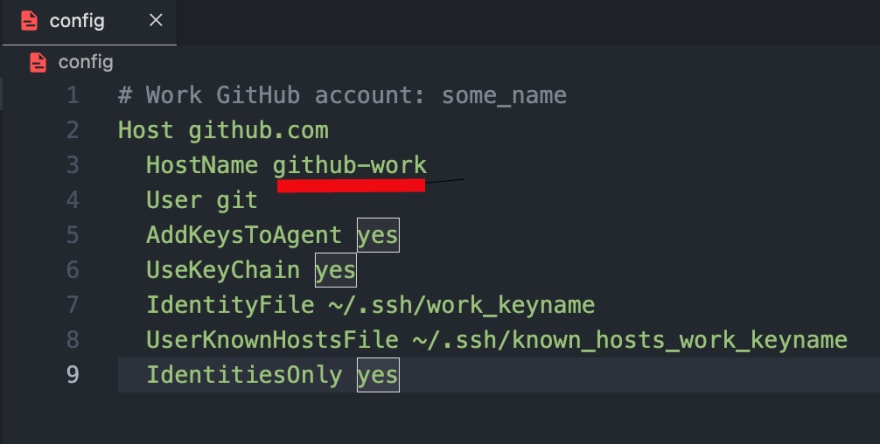 NOTE: Once you generate more keys, you will need to simply add the same set of lines as above for those new keys. We will see an example of this at the end of the article.

Step 5 - Add the keys to ssh-agent

Enter the command below -

A unique Agent PID will be displayed which means that the ssh-agent is now running.

If you are not on a Mac, do not use the --aple-use-keychain flag. This is for the newer keychain access management in MacOS versions after Monterey. If you are using an older version or are on Linux, replace it with this -

You will get a line confirming the key was added.

Make sure you're inside the .ssh folder. Then, copy the contents of your public key like so -

cat is to display the contents of the public key, and simultaneously, with the pipeline operator, we use pbcopy to copy the contents to the system's clipboard.

Next, add this to your host. If you are on GitHub, go to your account Settings>SSH and GPG Keys and add the key.

The last step is to verify that your configuration is up and running. Enter this command -

Suppose you have repeated the process up until Step 6 for two other keys and you now have two keys, with the second key supposedly on GitHub again, and the third key on BitBucket, then your config file should look similar to this - 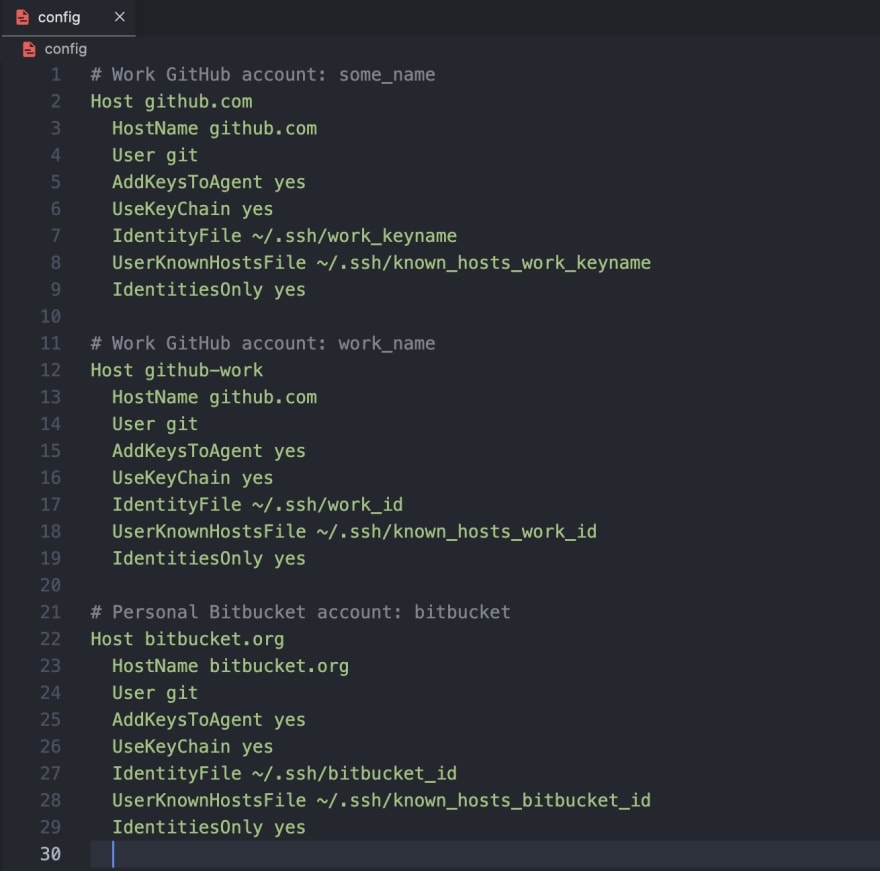 As you can see, there are multiple hosts with multiple corresponding keys and all of them are pattern matched by the ssh-agent to connect only as specified. Notice how the Host entry for GitHub work account and BitBucket account are unique.

You can now verify the configuration for all of them -

Voila! 🎉 You are now all set to clone your repos from the hosts you have setup.

An important thing to notice here is that in our example above, we have 2 GitHub hosts where the HostName entry points to github.com but the Host entry is kept different in order for the ssh-agent to uniquely identify each of them.

Therefore, when you are cloning a repo from the Default Personal account, you can simply type in -

However, when you want to clone a repo from the Work GitHub account, you would have to change the base URL of the repo after the part git@, with your corresponding Host entry, like so -

If it is a different host altogether like the Bitbucket one, then you can simply use the clone command like usual.

This brings us to the end of this rather long, but detailed article on how to setup multiple SSH keys for multiple hosts in your system.

Have fun setting up, and do let me know in the comments, if you have any suggestions. Until next time 🖖

Vinoo
Software developer currently on web technologies. Always curious and tinkering with tech.
I challenged myself to read every day, and it changed my life 📚
#watercooler #reading #productivity #motivation
How do you motivate yourself to write when so few are reading it?
#discuss #watercooler #meta
Twitter charging for API usage starting Feb. 9th
#twitter #api #discuss

Once suspended, vinoo will not be able to comment or publish posts until their suspension is removed.

Once unsuspended, vinoo will be able to comment and publish posts again.

Once unpublished, all posts by vinoo will become hidden and only accessible to themselves.

If vinoo is not suspended, they can still re-publish their posts from their dashboard.

Once unpublished, this post will become invisible to the public and only accessible to Vinoo.

Thanks for keeping DEV Community 👩‍💻👨‍💻 safe. Here is what you can do to flag vinoo:

Unflagging vinoo will restore default visibility to their posts.