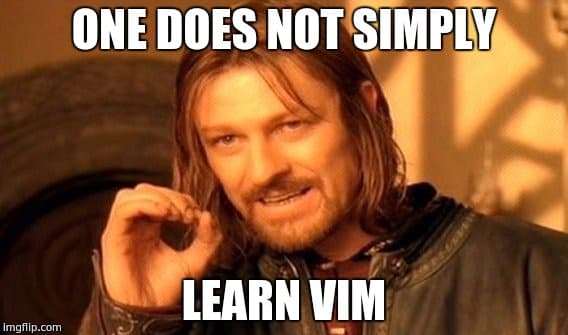 I have been putting this off for a while. I have always admired people that use Vim. I view them as sort of "super devs". If they use Dvorak, I have to pull out my shades to keep from being blinded by their genius. In this article, I will document the beginning of my journey to become as bright as the sun and faster than lightning. Here goes.

My first day was actually yesterday, but I started the journal today so let's catch up. I started out doing what any good developer would do and googled 'Learn VIM'. Lo and behold, I received millions of results in split seconds. Hail the almighty Google.

I found a course by a company called Upcase that basically said: go do vimtutor. This means going to the terminal (with Vim installed) and typing vimtutor. That's it. I started with it and spent a lot of time experimenting. I have to say, it's a little unnatural. I get a little sweaty using Vim because I'm resisting my natural tendencies. Don't judge me, I sweat a lot. That said, I can already see the benefits of having millions of combinations of commands literally at your fingertips. Here's a couple things I learned from the first day:

Do not use arrow keys. Ever. This is an anti-pattern in VIM. The hjkl method of moving the cursor allows you to keep your hand on the home row of the keyboard, which is crucial for efficiency.
Here's a nice little diagram from vimtutor.

By the same token, avoid using DEL to delete characters as much as possible. Just navigate to the character you want to delete and press x. Using the delete key is similar to using the arrow keys. It defeats the entire purpose of Vim.

Enable Vim shortcuts in your favorite editor. This will allow you to keep the familiar environment with colors and icons and whatnot. I found this much more enjoyable than just looking at my naked terminal. There are plugins and stuff that can add colors and handy tools to your terminal, but the resources I've looked at so far warn against installing a shit load of plugins right off the bat, and I shall take their word for it.

Don't be too hard on yourself. I just pressed the delete key to delete something, right before I used CTRL + Z to undo. This is a frustrating and difficult time, the first two weeks of Vim. I'm only on Day 2 and I'm feeling the burn already. But we will prevail. If I can do this, so can you.

Alrighty - new day, new tips. Many thanks to those of you who commented with tips and tricks that you've learned from your own experience with Vim. I actually really like how this post is evolving and would love to see some more tips in the comments if you have any, no matter how small or insignicant they may seem. I promise it will help someone (me).

I ended up writing down some of the key navigation shortcuts for Vim on some post-it notes and sticking them to my monitor -- here's a brief rundown of the shortcuts I have found to be essential (for a complete newbie). I've found it's useful to think of the keys as actions, which can be divided into different categories. The two categories I've identified this far are "edit" and "move". There may be more formal ways to refer to these categories -- post a comment if you know of a better way to refer to them.

I put a * on the delete command because it's a little special. By itself it does nothing. Combine it with a move command and you can delete all the things.

Let's say I want to delete two words that are next to each other.

So what's happening here? d tells Vim I want to delete something. It then patiently waits for me to tell it what to delete (so polite). I say to Vim, 2w (read: two words) and poof, they're gone. That move there shows the power of Vim. Each of these keys does something on its own and lets you run with Vim. Combine them, and you can fly.

Yesterday, I called it VIM. I called it that in the title too. I won't change it for the sake of preserving my growth as a Vimmer. TIL, it's supposed to be "Vim", like "Jim".
From :help pronounce:

This tip comes from Jean Bernard - thanks Jean!
Quoting him here:

I want to add a "Comfort-o-meter" to this post. I'd say I've risen from a 1 to a 2. I no longer sweat when I use Vim, so that's progress. Still have a tendency to reach for comfortable shortcuts for selecting text and moving lines, copy-pasting, etc. However, the momentum is building on itself and I'm having fun.

It's been a week now since I started making an effort to learn Vim. I haven't been using it at work since I find it too distracting to really learn and practice the shortcuts while thinking about writing clean code and building a maintainable application. That being said, I think I'm nearing the point where enough basic movements and commands are automatic enough to warrant making the switch full time. I'm in no hurry.

The basic shortcuts will take you far. The ones I outlined earlier in the post have been basically the only ones I've used up to this point. You can accomplish most things with the d (motion) command when it comes to deleting / cutting text. Similarly y (motion) for copying lines or words. I've found it's worthwhile to start thinking of sections of text in these terms rather than thinking about the space around them for selecting.

Get good with :help. Vim's help system is very searchable and useful if you know what your doing.

This one comes from Alan Campora:
"Edit and move are modes, not actions. Actions are something different. For example, if you want to replace a word, put your cursor on it and press c(change) i(inner) w(word). That's a great level up :D"

This turned out to be a crucial tip for me. This subtle paradigm shift made me understand that d is not so much a verb to delete something, rather just a button to put me in delete mode. This is obvious in retrospect, but Alan's tip was what I needed to fully understand -- hopefully it helps someone else, too.

COMFORT-O-METER: 4
Treating the comfort-o-meter as similar to the Richter scale for Earthquakes, this is pretty sizable progress. The few basic (mode) (motion) combos make editing with Vim pretty breezy. It's growing on me and I'm glad I pushed through the first day of discomfort. That really is the worst part.

Back To Basic: Mental Model to Understand Flexbox