There are plenty of dead projects in my github.

Basically I treat side projects like this comic strip 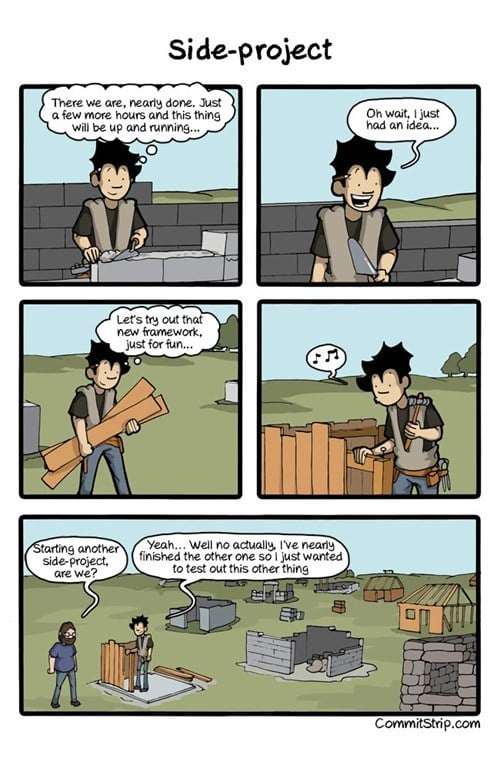 But I will mention the "best" ones

angularJs wrapper around a shitty classified website (MaltaPark), used a lot in Malta (I used to live in Malta) PaltaMark

self explainatory, and in c#, yuck https://github.com/vikkio88/screenshottaker

Bascit (was supposed to be bash-it)

a post-it implementation in bash repo

a reverse rainbow table checker that control in a list of sites if your password's hash is present or not. repo
in ruby, what the hell was wrong with me?

https://github.com/vikkio88/Coolibree
A php cms using flat files, way before composer and proper OOP, I version controlled it as memento of how shitty I was once (not that now I am the greatest programmer of all time)
It was coming after another attempt, poorly attempt virublog.

The Future of Machine Learning: Trends to Watch Out For

Vincenzo
I am an Italian developer, I live in the UK and I like to code and pizza.
What was your win this week?
#discuss #weeklyretro
I used the web browsers Edge and Brave exclusively for 1 week each here are my thoughts
#webdev #beginners #productivity #codenewbie
A Developers perspective on the M1 MacBook Pro after 5 months of usage
#webdev #beginners #codenewbie #career