Data-Oriented Programming is not an invention. It has its origins in the 1950s and the invention of LISP and is based on a set of best practices that can be found in both Functional Programming and Object-Oriented Programming. However, this paradigm has only been applicable in production systems at scale since the 2010s and the implementation of efficient persistent data structures.

This article traces the major ideas and discoveries which, over the years, have allowed the emergence of DOP. 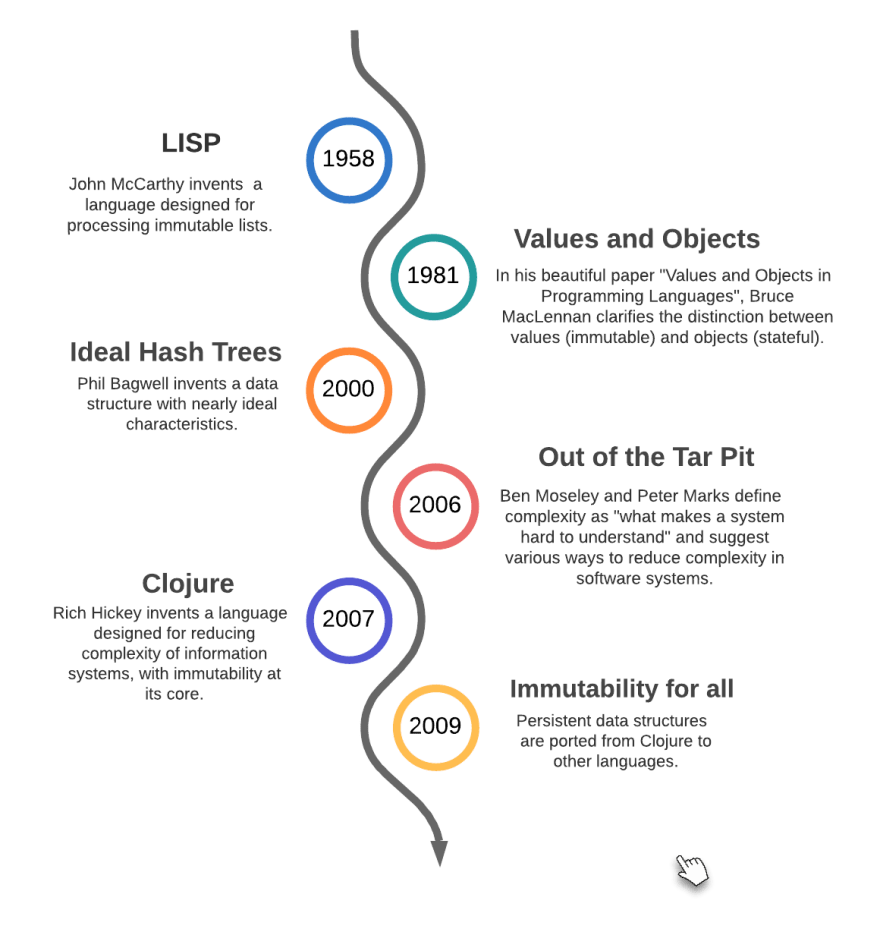 In LISP, John McCarthy has the ingenious idea to represent data as generic immutable lists and to invent a language that makes it very natural to create lists and to access any part of a list. That's the reason why LISP stands for LISt Processing.

In as sense, LISP lists are the ancestors of JavaScript object literals. The idea that it makes sense to represent data with generic data structures (DOP Principle #2) definitely comes from LISP.

The main limitation of LISP lists is that when we update a list, we need to create a new version of it by cloning it and it has a negative impact on performances both in terms of CPU and memory.

In a beautiful, short and easy-to-read paper named Values and Objects in Programming Languages, Bruce MacLennan clarifies the distinction between values and objects. In a nutshell:

The meaning of the term object in this paper is not exactly the same as in the context of Object-Oriented Programming.

This paper has been a source of inspiration for Data-Oriented Programming as it encourages us to implement our systems in such a way that most of our code deals with values.

HAMT and Ideal hash trees are the foundation of efficient persistent data structures.

In Out of the Tar Pit, Ben Moseley and Peter Marks claim that complexity is the single major difficulty in the development of large-scale software systems. In the context of their paper, complexity means what make a system hard to understand.

In a sense, Data-Oriented Programming is a way to get us out of the tar pit.

Rich Hickey, an Object-Oriented Programming expert, invented Clojure to make it easier to develop information systems at scale. Rich Hickey likes to summarize Clojure core value with the phrase: "Just use maps!". By maps, he means immutable maps to be manipulated efficiently by generic functions. Those maps were implemented using the data structures presented by Phil Bagwell in "Ideal Hash Trees".

Clojure's efficient implementation of persistent data structures has been attractive for developers from other programming langauges. In 2009, there were ported to Scala. Over the years, they have been ported to other programming languages either by organizations (like Facebook for Immutable.js) or by individual contributors (like Glen Peterson for Paguro in Java).

Nowadays, DOP is applicable in virtually any programming language!

In this section, we put each one of the 4 DOP principles into its broader scope.

Separating code from data used to be the main point of tension between Object-Oriented Programming (OOP) and Functional Programming (FP). Traditionally, in OOP we encapsulate data together with code in stateful objects, while in FP we write stateless functions that receive data they manipulate as an explicit argument.

This tension has been reduced over the years as it is possible in FP to write stateful functions with data encapsulated in their lexical scope. Moreover, OOP languages like Java and C# have added support for anonymous functions (lambdas).

One of the main innovation of JavaScript when it was released in December 1995 was the easiness to create and manipulate hash maps via object literals. The increasing popularity of JavaScript over the years as a language used everywhere (frontend, backend, desktop) has influenced the developer community to represent data with hash maps when possible. It feels more natural in dynamically-typed programming languages, it is applicable also in statically-typed programming languages.

Data immutability is considered as a best practice as it makes the behaviour of our program more predictable. For instance, in Effective Java, Joshua Block mentions "Minimize mutability" as one of Java best practices.

There is a famous quote from Alan Kay - who is considered by many as the inventor of Object-Oriented Programming - about the value of immutability:

The last thing you wanted any programmer to do is mess with internal state even if presented figuratively. Instead, the objects should be presented as site of higher level behaviors more appropriate for use as dynamic components. (...) It is unfortunate that much of what is called "object-oriented programming" today is simply old style programming with fancier constructs. Many programs are loaded with "assignment-style" operations now done by more expensive attached procedures.

Unfortunately, until 2007 and the implementation of efficient persistent data structures in Clojure, immutability was not applicable for production applications at scale.

In addition to that, many languages provide support for read-only objects natively. Java added record classes in Java 14. C# introduced a record type in C# 9. There is a ECMAScript proposal for supporting immutable records and tuples in JavaScript . Python 3.7 introduced Immutable data classes.

Since the development of data schema languages like JSON schema it is natural to validate data even when data is represented as hash maps.

In this article, we have explored the ideas that inspired Data-Oriented Programming and the discoveries that made it applicable in production systems at scale in most programming languages.

Once suspended, viebel will not be able to comment or publish posts until their suspension is removed.

Once unsuspended, viebel will be able to comment and publish posts again.

Once unpublished, all posts by viebel will become hidden and only accessible to themselves.

If viebel is not suspended, they can still re-publish their posts from their dashboard.

Once unpublished, this post will become invisible to the public and only accessible to Yehonathan Sharvit.

Thanks for keeping DEV Community 👩‍💻👨‍💻 safe. Here is what you can do to flag viebel:

Unflagging viebel will restore default visibility to their posts.