While original focus of WebRTC was on video conferencing it can also be used for real-time broadcast or streaming with ultra-low latency (DASH-IF WebRTC report). However, the adoption rate for using WebRTC in this context has been slow and one of the reasons is the lack of standard protocol for ingest (producer) and playback (viewer).

The ingest side is being addressed by the draft IETF standard WHIP that allows you to send media from a WHIP compliant sender software to a WHIP compliant media server. WHIP proposes a simple HTTP based protocol that will allow WebRTC based ingest of content into streaming services and/or CDNs.

On the playback side there are standardization initiatives in discussion but not as far progressed as on the ingest side with WHIP. WebRTC media servers provides WebRTC players but they are often tied to the specific WebRTC media server.

As we have not yet reached a common standard (transport method) for the SDP exchange between media server (broadcaster) and the player in this context we have launched an open source project for a media server independent WebRTC player. 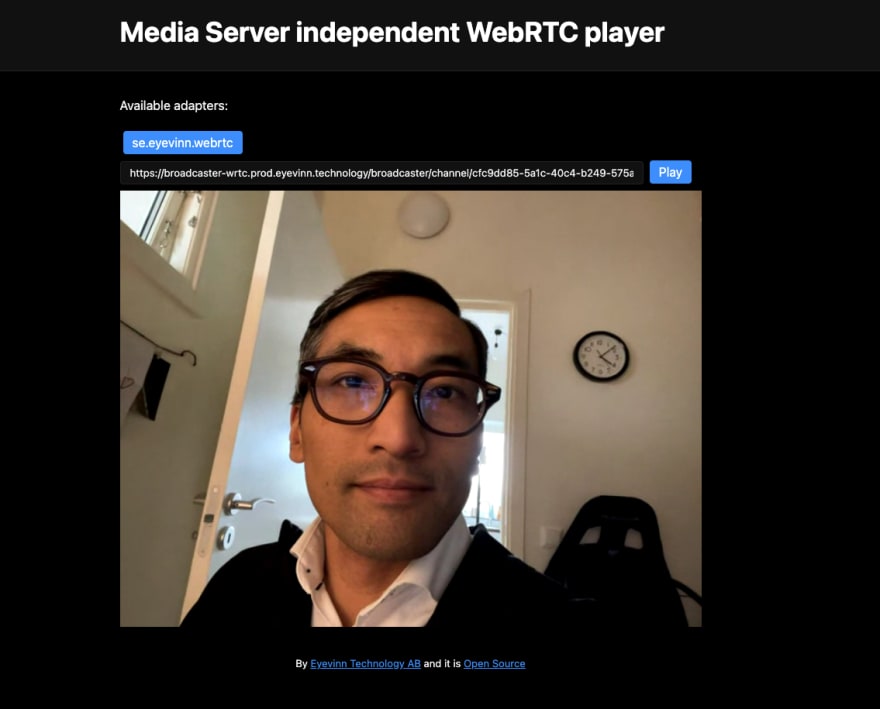 If you just want to use the WebRTC player with any of the included adapters the HTML and Javascript below gives you an example.

And the Javascript (typescript) code.

The string se.eyevinn.webrtc specifies to use the included adapter for an Eyevinn WebRTC WHIP-broadcaster. To obtain a list of available adapters you can do the following.

If you want to use this WebRTC player but with a media server of your own you can develop a custom adapter and use that one instead. When you create an instance of the player you provide an AdapterFactoryFunction that will return a new instance of an adapter extending the base class BaseAdapter.

Set type === "custom" and the factory function in the constructor. A template for a custom adapter below.

The exchangeSdp() function is where you implement the media server specific way of exchanging SDPs. For example:

In the example above the local SDP is sent with an HTTP POST to the media server which in return responds with the remote SDP.

If you want to include support for your media server or want to contribute in general we are very happy for a pull request to this project. To add an adapter to the project you first create the adapter in the same way as described above but also include it in the repository in the adapters folder. Then add your unique string to the list of adapters in adapters/factory.ts together with a factory function.

Eyevinn Technology is an independent consultant firm specialized in video and streaming. Independent in a way that we are not commercially tied to any platform or technology vendor.

Want to know more about Eyevinn and how it is to work here. Contact us at work@eyevinn.se!

Once suspended, video will not be able to comment or publish posts until their suspension is removed.

Once unsuspended, video will be able to comment and publish posts again.

Once unpublished, all posts by video will become hidden and only accessible to themselves.

If video is not suspended, they can still re-publish their posts from their dashboard.