The rapidly advancing Flutter framework presents exceptional opportunities in cross-platform development. It is the primary key to explaining increasing popularity among developers and businesses. Going to hire a Flutter developer for building a feature-rich mobile application? We recommend finding answers to the next questions:

Check out requirements and tips on how to hire a Flutter developer by reading this article.

WHY IS FLUTTER POPULAR

When it comes to Flutter mobile apps development, developers are no more restricted to a particular platform or operating system. Cross-platform approaches enable the quick and easy creation of iOS and Android apps. Moreover, it is handled within a single codebase. An extensive set of tools and frameworks are available at the developers’ disposal.

Flutter mobile development has become in much demand just in a few years. It is among the most used technologies in 2020 and keeps on getting the highest market positions. According to the statistics, there is considerable growth in the number of developers using Flutter. It has increased from 30% to 39% over the last year. In comparison, we can mention the main competitor React Native that obtained the same market share of 42% as in 2019. 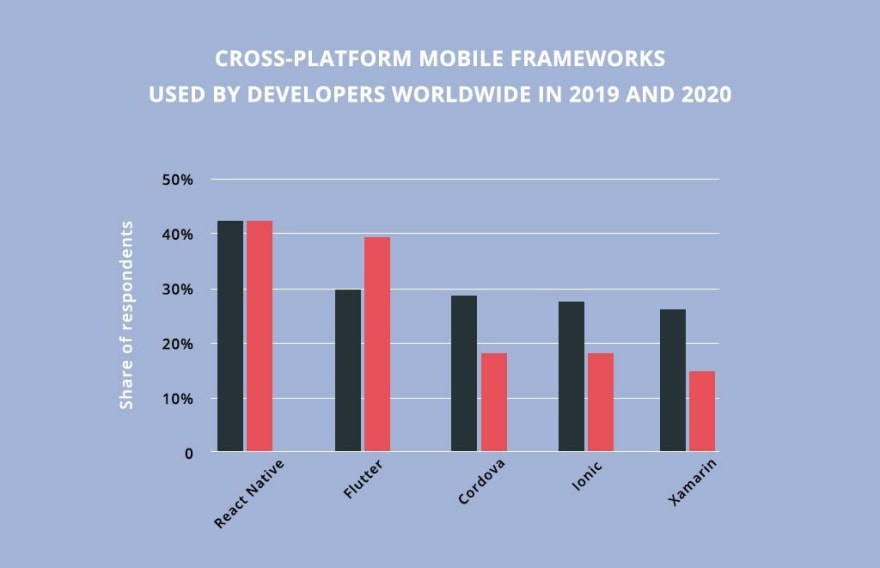 Considering the framework’s popularity, it is also an increasing demand for Flutter specialists. More and more businesses would like to hire Flutter app developers. According to Google’s statistics, 35% of them work for startups, about 20% are self-employed, design companies hire 7%. It is worth noting that almost 3% are involved in app development for enterprises. That means companies of different spheres and sizes are interested in app development using Flutter.

The community grows considerably due to development benefits and convenience. One of the advantages is a mild learning curve. Migrating from one technology to another is quite simple. Specialists with other expertise can find specific documentation for each group of developers. It includes documentation for iOS, Android, React Native, or Xamarin developers. Previous experience and known approaches turn into a valuable background. Also, it allows them to proceed with Flutter application development services. Excellent community support, constant updates, accessible documentation attracts other developers. Most specialists aren’t new to mobile development. Often they can switch from different technologies. Developers apply their knowledge and favor improvements with each release.

If someone considers the framework immature, they need to check the latest updates. The new versions are released in a brief period. Moreover, they do everything to deliver web and desktop development using Flutter.

Google released Flutter 1.20 on Aug 5, 2020. These are a few of the updates that Google has presented:

Just in less than two months, they were announcing Flutter 1.22 on Oct 1, 2020. This release focuses on:

All these make the Flutter framework so popular among developers. And we can say that it isn’t just a current trend. The strong community support and advancing functionality are determining factors. The worldwide interest in app development using Flutter keeps on constant growth. It manages to overcome such well-known players as React Native and Xamarin. 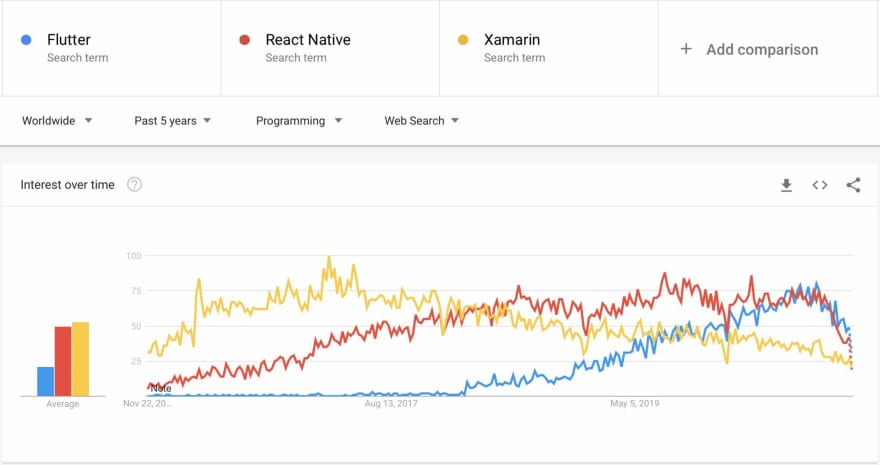 Looking for the main reasons to hire a Flutter developer, it is essential to understand what Flutter technology is and how developers can use it. Initially created for the Android operating system, it pursued the main goal to support both mobile platforms. The framework was so successful and fast in reaching this goal that Google went further with its improvements and updates. At present, Flutter development company can advance both mobile and web development using this technology. They can either build the app from scratch or add it to the existing applications.

Moreover, Google has announced the ability to create desktop applications with this framework. It is the early development stage. Though desktop support for Flutter already allows developers to compile the code to the native Linux and macOS desktop apps. Windows platform support isn’t available yet.

Supported by Google and the community, the framework enters the market quickly. It sets new trends in mobile and web development. Presented solutions have great potential and keep on constant advancement. Hire Flutter app developers when you want to: 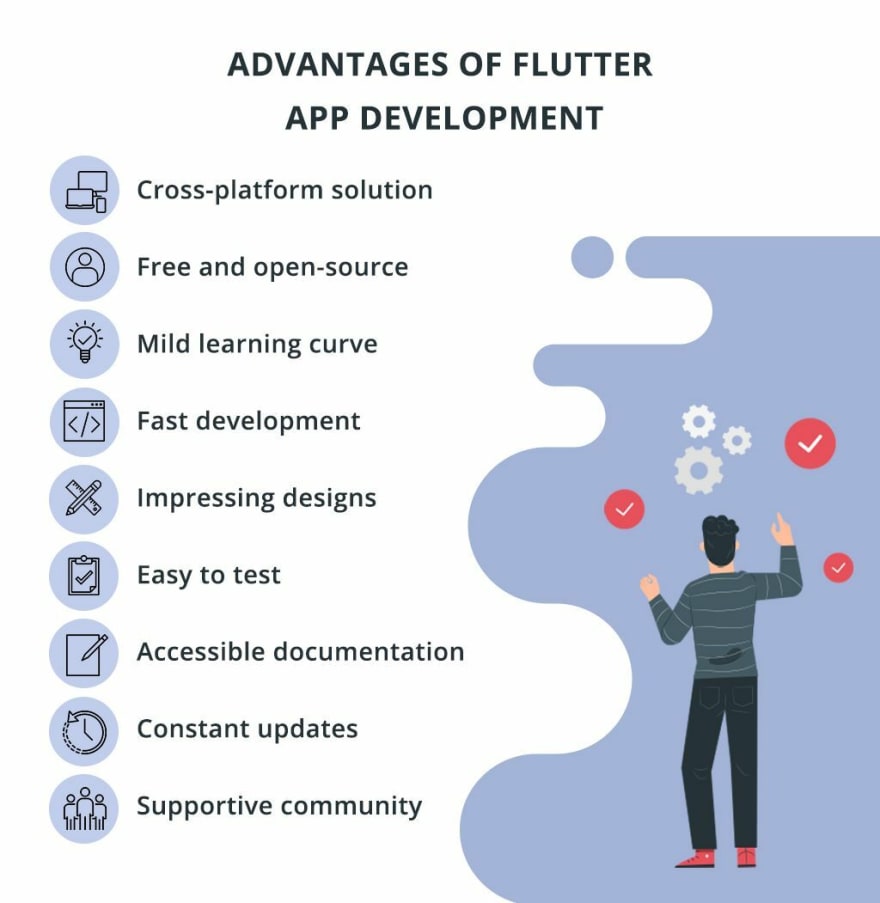 Mobile apps developed in Flutter can easily compete with native apps. It includes performance, functionality, and UI/UX. The variety of tools simplifies the development process and increases staff productivity. A single code base is the main advantage for developers as they can create mobile applications for both operating systems. Supporting the unified object-oriented model, Flutter has a full catalog of custom widgets. Also, it enables the implementation of fast UI coding. The interactive and structural approaches allow the creation of exceptionally designed mobile apps.

Moreover, advanced APIs help to ensure smooth and clean animation. The hot reload feature supports change management. It allows developers to check updates in real-time. It is worth noting that you can add Flutter to the existing apps. For example, when integrating a new UI, developers can import the module for rendering application UI. This option is available for both native iOS or Android apps. These are only several samples of how Flutter makes a difference in the development process. Thus it enables the delivery of feature-rich mobile solutions.

Web support still runs in the beta channel. Though it provides fresh and long-run perspectives in web development using Flutter. Developers can compile the code into the client experience with standardized web technologies. These include HTML, CSS, and JavaScript. All development features are accessible there. Thus, running a new app with web support is quite similar to projects for other platforms. Besides, developers can pack mobile apps as a PWA application to add web experience. Google aims at a unified environment for mobile and web content with no need for rewriting the code. In one of the latest releases, Google also introduced a new PWA in Flutter 1.20. It supports such features as installability and offline capabilities. We recommend following all the latest updates since the new features and improvements appear with each version.

REQUIREMENTS TO HIRE A FLUTTER DEVELOPER

Flutter mobile development has tremendous success among developers and businesses. This technology is relatively new as Google released the first stable version for Android and iOS in December 2018. However, the number of developers has already grown to 2 million in less than two years. The framework is advancing at full speed. It keeps on presenting reasonable solutions for cross-platform app development. When you decide to hire Flutter app developers, take into account the following thing. It is impossible to find specialists with long experience in Flutter app development. The standard division, due to expertise in Flutter programming, isn’t workable. You can’t divide developers into junior (1-2 years), middle (3-4 years), and senior (5+ years) ones. 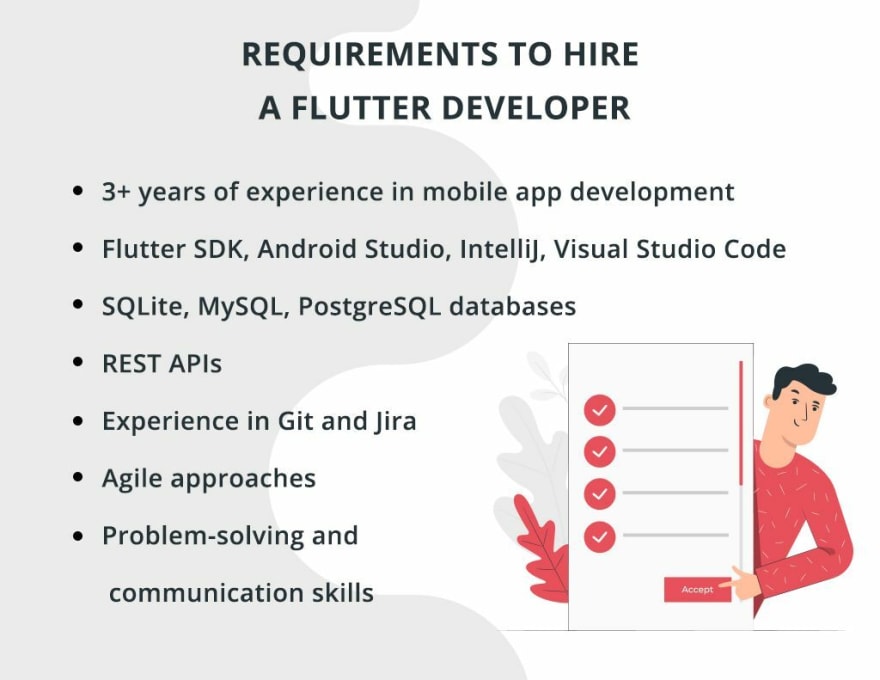 The main recommendation on setting requirements is to look at previous developers’ experience. They should be proficient in making mobile applications with other technologies. That is one of the Flutter framework benefits. Developers can apply their existing knowledge of different development approaches. Of course, they have to understand the fundamentals of the Flutter framework. And how it relies on mobile operating systems. Significant experience in Android or iOS app development is a perfect addition. They don’t have to study everything from the beginning. They can advance their skills with new solutions.

The general requirements to hire a Flutter developer will be:

Moreover, chosen specialists have to be aware of all the latest updates and market standards.

It means they need to be somewhat adaptable. Flutter cross-platform development is advancing at a rapid speed. Also, it’s worth mentioning its mild learning curve. Though adapting to new features is inevitable. It is essential to be ready for constant improvements.

Excellent communication skills are another subject to consider when you hire Flutter developers. Efficient team collaboration is the key to the success of your project. The positive experience can be supported by the full engagement of the Flutter development team. It is essential that employees share your business values. It helps to understand both the technical and business requirements of your product. In this case, they will be willing to contribute to the process. Therefore, it is much easier to create a positive experience for your customers. The combination of the mentioned requirements can simplify the hiring process.

Hiring has always been a complicated process. It requires proper research and careful planning. We hope that you have found all the necessary information. So you can hire a Flutter developer due to the project needs.

Flutter mobile development is considered among the best options to build applications. It offers a quick and efficient development solution.  Always consider technical skills, developers’ previous experience, location, and collaborative models. Combining the essential aspects allows you to make the right decision. Also, it will advance development with the latest approaches.

This article about how to hire a Flutter developer is also published here.

This week in Flutter #20