For a few months, my computer experienced some freezing during several minutes and the only solution to return to work was a reboot. It’s really annoying so I decided to look at what’s going on.
I have been working since three years on a laptop DELL E7450. It has 8GB RAM size and an Intel i5 core with 2 cores and 4 logical processors. It is quite enough to work with, isn’t it ?
I’m using Ubuntu 18.04 coupled with i3 for my window manager. By the way, if you don’t know yet about i3, you have to take a look at it.
I noticed that with only 2 open applications : Google Chrome and Slack, both used most of my memory. Google Chrome is well known to use a lot of RAM and Slack application is built upon Electron and bad news: Electron is a known resource hog.

I’ve made some simple tests to check memory consumption. As you can see from this picture, only 2 open applications use nearly 100% of my memory.

This picture is extracted from a screenshot of the htop program. Htop is a great alternative to top. It provides facilities to filter, sort, search and view per core. The thing that interested me here is the memory, especially memory per process. To do that, i’m using smem, a tool that calculates the USS, PSS and RSS per process.

USS stands for Unique Set Size. This is the amount of unshared memory unique to that process. It does not include shared memory. In the other hand, PSS stands for Proportional Set Size. It adds together the unique memory (USS), along with a proportion of its shared memory divided by the number of processes sharing that memory. It gives a representation of how much actual physical memory is being used per process - with shared memory truly represented as shared.

RSS stands for Resident Set Size. This is the amount of shared memory plus unshared memory used by each process. If any process shares memory, this will over-report the amount of memory actually used, because the same shared memory will be counted more than once - appearing again in each other process that shares the same memory. This metric can be unreliable, especially when processes have a lot of forks.

Here the command I used :

If you're not familiar with command line, you can use explainshell.com, a great website to dissect commands. 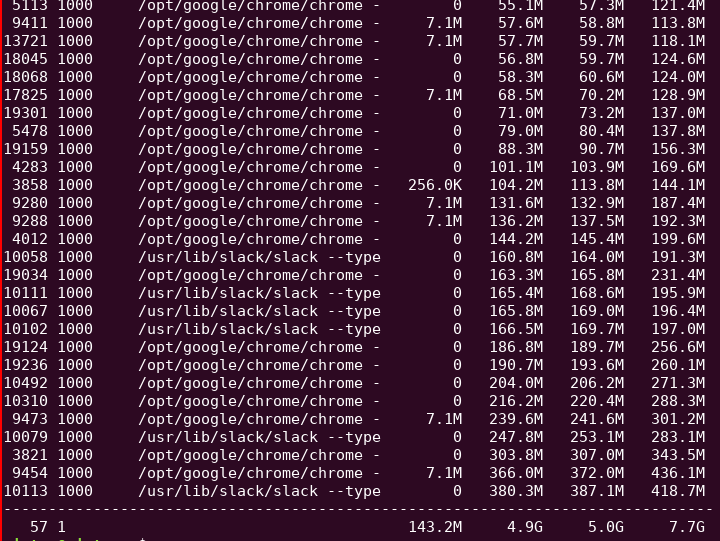 This parameter will set the maximum amount of memory the container can use. It works, but it means I need to create a Docker image dedicated to all applications I want to limit the amount of memory.
In fact, Docker uses a technology called namespaces to isolate containers from other processes. To learn more about Docker architecture, you can take a look at Docker overview page. One namespace is interesting in my case : Control groups also known as cgroups. This one enables the limitation of physical resources.

To ensure memory limitation is correctly applied, it’s possible to look in directory /sys/fs/cgroup/memory/mygroup/ and precisely at file memory.limit_in_bytes.

In my case, I use cgroups only to limit memory allocated but it’s also possible to limit CPU.

Then, let’s see if it’s works.

As you can see, PSS is strictly equal to 1G but the swap has now increased to 500M. The application is a bit slow, changing from one workspace to another is a bit long but it’s still comfortable to use.
Let’s disable swap to see if it works.

Guess what ? It doesn’t work, the application is not responding and some processes are killed. In fact, it’s the OOM Killer (Out-of-memory Killer) who is in charge to kill processes in order to free up memory for the system. The OOM Killer selects the best candidate for elimination from a score maintained by the kernel. You can see this score in:

I know how to limit memory consumption for one application but it’s definitely not sustainable in the future. I will have to create a group per each application I want to limit memory usage. Thanks to this StackExchange question, I found a script that does the job. It’s available here:

This script creates a group each time it’s launched and remove it when it’s killed.
Easy to use:

That’s fine but this script is a piece of code that I will have to maintain, update, upgrade, etc….

Another way to integrate memory limit to my system is to use systemd.

To do this, I have to wrap my application into a systemd service.

By specifing paramaters MemoryAccounting and MemoryMax, I’m able to limit memory allocated. As explained in systemd documentation, systemd organizes processes with cgroups. In my opinion, using systemd is far more sustainable than maintaining a custom shell script as it’s became the standard for most Linux distributions.

As I was writing this article, slack engineering published an article announcing a new Slack desktop application and I quote:

One of our primary metrics has been memory usage

Don’t hesitate to tell me if I forgot a way to limit memory consumption and let me know what you think about it.

Thanks to Nastasia and Mathieu for their time and proofreading.

Once suspended, vga will not be able to comment or publish posts until their suspension is removed.

Once unsuspended, vga will be able to comment and publish posts again.

Once unpublished, all posts by vga will become hidden and only accessible to themselves.

If vga is not suspended, they can still re-publish their posts from their dashboard.

Once unpublished, this post will become invisible to the public and only accessible to Victor Gallet.

Thanks for keeping DEV Community 👩‍💻👨‍💻 safe. Here is what you can do to flag vga:

Unflagging vga will restore default visibility to their posts.