Bytecode will be executed by JRE. JRE is the implementation of JVM, which analyses the bytecode, interprets the code and executes it.
JVM – Virtual machine is a software implementation of a physical machine. Java was developed with the concept of WORA, which runs on a VM. The compiler compiles a Java file into a Java .class file, then that .class file is input into the JVM, which loads and executes the class file.
Below is the Architecture of JVM: 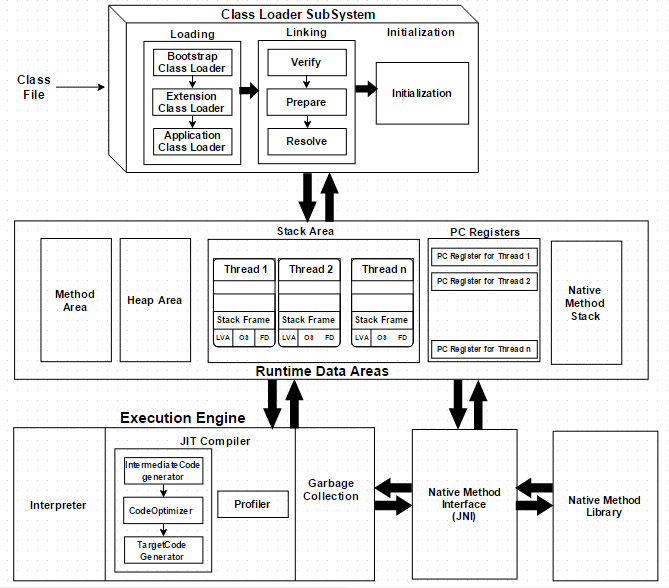 2.1 Method Area – The method area is also called the class area. The method area stores data for each and every class, like fields, constant pools, and method data and information. All the class level data will be stored here, including the static variables. There is only one Method Area per JVM and it’s a shared resource.
2.2 Heap Area – All the objects and their corresponding instance variables and arrays will be stored here. There is only one Heap Area per JVM and it’s a shared resource. Since the Method and Heap Areas share memory for multiple threads, the data stored is not thread-safe.
2.3 Stack Area – For every thread, a separate runtime stack will be created. For every method call, one entry will be made in the stack memory which is called Stack Frame. All the local variables, all the parameters and all the return addresses will be created in the stack memory. Stack never store objects, but they store object references. The Stack Area is thread-safe since it’s not a shared resource. The Stack Frame is divided into three sub entities:
• Local Variable Array – Related to the method how many local variables are involved and the corresponding values will be stored here.
• Operand Stack - If any intermediate operation is required to perform, operand stack acts as runtime workspace to perform the operation.
• Frame Data - All symbols corresponding to the method are stored here. In the case of any exception, the catch block information will be maintained in the frame data.
2.4 Program Counter (PC) Registers - Each thread will have separate PC Registers, to hold the address of current executing instruction. Once the instruction is executed the PC register will be updated with the next instruction.
2.5 Native Method Stacks - Native Method Stack holds native method information. For every thread, a separate native method stack will be created. Native internal threads contain all the information related to native platforms. For example, if we're running the JVM on Windows, it will contain Windows-related information. Likewise, if we're running on Linux, it will have all the Linux-related information we need.

Following are the subcomponents involved as part of JIT Compiler:
• Intermediate Code Generator – Produces intermediate code
• Code Optimizer – Responsible for optimizing the intermediate code generated above
• Target Code Generator – Responsible for Generating Machine Code or Native Code
• Profiler – A special component, responsible for finding hotspots, i.e. whether the method is called multiple times or not.
3.3 Garbage Collector – Garbage collection is the process by which the JVM clears objects (unused objects) from the heap to reclaim heap space. Collects and removes unreferenced objects. Garbage Collection can be triggered by calling System.gc(), but the execution is not guaranteed. Garbage collection of the JVM collects the objects that are created.

The most important JVM Components related to performance are: Heap, JIT (Just In Time) Compiler and Garbage collector.

How I REACTO to Algos: Sum Intervals

Once suspended, veerugithubcode will not be able to comment or publish posts until their suspension is removed.

Once unsuspended, veerugithubcode will be able to comment and publish posts again.

Once unpublished, all posts by veerugithubcode will become hidden and only accessible to themselves.

If veerugithubcode is not suspended, they can still re-publish their posts from their dashboard.

Once unpublished, this post will become invisible to the public and only accessible to veeru-github-code.

Thanks for keeping DEV Community safe. Here is what you can do to flag veerugithubcode:

Unflagging veerugithubcode will restore default visibility to their posts.