My computer has many cores but doesn't have enough RAM to store the whole data. So I usually need to process data from a stream parallelly, for example, reading a Thai text line by line and dispatch them to processors running on each core.

In Clojure, I can use pmap because pmap works on a lazy sequence. However, using Lparallel's pmap on Common Lisp with lazy sequences wasn't in the example. So I used Bordeaux threads and ChanL channels instead. It worked. Still, I had to write repetitive code to handle threads and channels whenever I wanted to process the stream parallelly. It didn't only look messy, but it came with many bugs.

So I created a small library, called stream-par-procs, to wrap threads and channels management. As shown in the diagram, the reader reads a line for the stream, the system dispatch a line to different processors, and finally, the collector creates the final result. 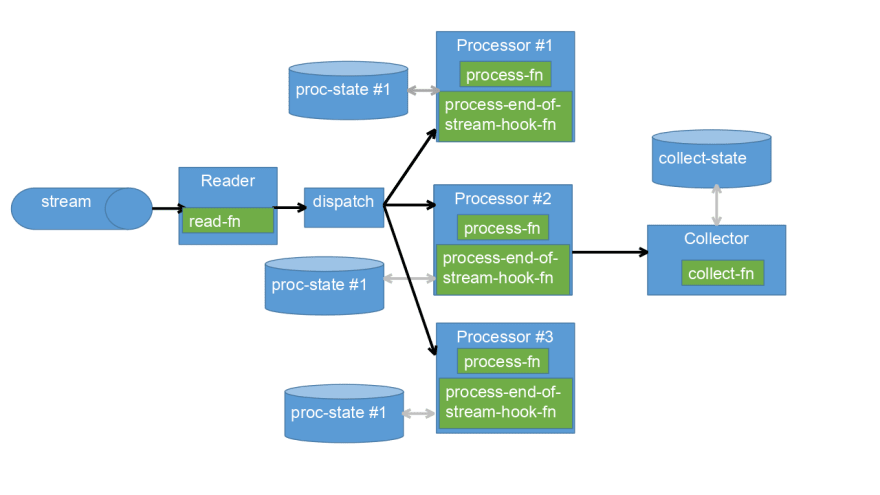 I only need to define a function to be run in the processor, another function for running in the collector, and other functions for initializing states. It hides details, for example, joining collector thread when every processor sent END-OF-STREAM.

A software bug captured Apple and other huge companies

Once suspended, veer66 will not be able to comment or publish posts until their suspension is removed.

Once unsuspended, veer66 will be able to comment and publish posts again.

Once unpublished, all posts by veer66 will become hidden and only accessible to themselves.

If veer66 is not suspended, they can still re-publish their posts from their dashboard.

Once unpublished, this post will become invisible to the public and only accessible to Vee Satayamas.

Thanks for keeping DEV Community 👩‍💻👨‍💻 safe. Here is what you can do to flag veer66:

Unflagging veer66 will restore default visibility to their posts.