I've been fiddling around the new changes GitHub made this year at Satellite Virtual 2020. There's a whole article on GitHub Blog about what they announced, like GitHub Discussions, Codespaces etc. While attending the event I was reminded of what they announced last year. One of the biggest announcement was the introduction of GitHub Actions!

As always, I started working on a repo which includes some very basic Actions just to test things out, and I was really impressed by its capabilities. Some of you might be using them in your projects but for those who heard this term for the very first time or want to dive into this topic, here's what all I have to tell you about GitHub Actions. ▶

GitHub Actions is an automation service which enables you to create a custom Software Development Life Cycle (SDLC) directly in your GitHub repository (repo).

In a few sentences,

Actions are just some individual tasks which you provide to GitHub, and what it does is that it automates those tasks in your workflow. You set up these automated workflows in the same repo to build, deploy, test and release the code.

If you're into making workflows while working on your open-source project on GitHub while collaborating with Pull Requests (PR) and Issues, then Actions are a really nice and useful addition to your software and team.

There's no limit to how much Actions are useful. They're mostly used to make end-to-end Continous Integration/Continous Delivery (CI/CD) integrations and it works like a charm! ✨

Okay, looks like you're ready to make your first GitHub Actions. Leave the wait and jump along with me!

⚠ We will be working with Dockerfiles in this tutorial. If you're new to this, I highly recommend learning it first.⚠

We will be doing this from scratch, without any templates. For that, after you're ready with your GitHub repo, the first thing you do is create a Dockerfile.

We're fetching the Debian image from Docker Hub, creating a entrypoint bash script where we will write more code regarding what the Action will actually do.

✨ Commit your file and open a PR against the master branch.

Here we'll write the code of what we need to do with our Action i.e. output our name in a string. Yes, it's basic but this is just us starting with Actions, remember the capabilities are endless!

✨ Write the .sh code. Inside the same branch, the same folder we write the following code:

As you can see, we made an environment variable called MY_NAME wherein our name will be added dynamically just like we do it in other programming languages! 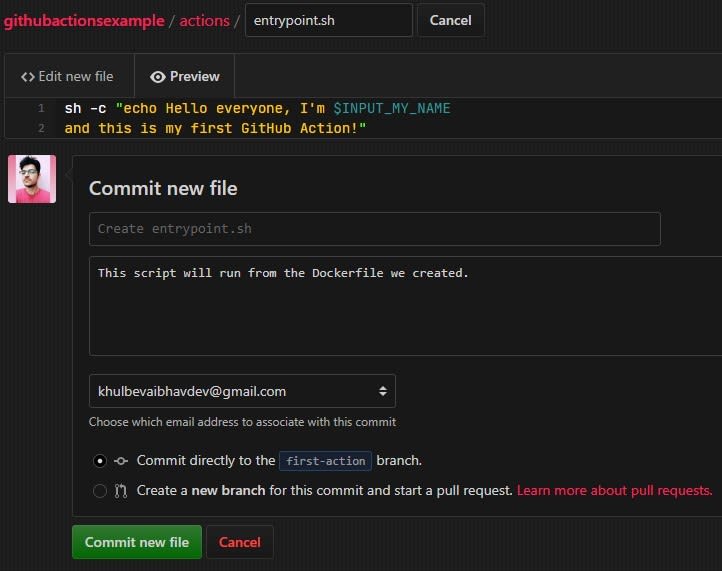 ✨ Commit and push your changes.

All Actions need a metadata file which defines the inputs, outputs and main entrypoint for your action. This is written in the YAML (.yml) syntax.

✨ Add the YAML file: Create this new file under actions/action.yml and add the following code:

Just like all other metadata files this one is also straightforward and tells GitHub Actions about the general information like author name, Docker image used and of course, the inputs.

✨ You know what to do next...commit and push the changes!

In this step, we will create and trigger the workflow. Workflows trigger based on any event you write. In our case, we can simply push the event.

NOTE: It's important to make this file directly under .github/workflows/ directory.

Here's the code for main.yml:

Let me explain it to you:

✨ Ahem, so what you always do in the end. 👀 (Start committing and pushing for the last time!)

And BOOM! Your action has been triggered! 🥳

But what does this Action do? I'm still confused!

Okay, anytime you make a new commit to the repo, the workflow will trigger.

The status of your Action is shown under the "Actions" tab in your repository. From there you will see the actions that have run, and you can click on the action's "Log" link to view details.

This is what you'll see there:

If things went well, you should see the string "Hello world my name is Vaibhav!" printed at the bottom as shown above.

Finally, we can incorporate the workflow by merging the current PR. Remember we're still in the first-action branch? To make sure your next commit or other commits from your contributors uses the current Action, we need to do this merge with the master branch.

✨ As the very last step, simply merge the opened PR and delete the first-action branch.

PS: From this year, I've decided to write here on DEV Community. Previously, I wrote on Medium. If anyone wants to take a look at my articles, here's my Medium profile.

Roadmap to becoming a Flutter developer.

Once suspended, vaibhavkhulbe will not be able to comment or publish posts until their suspension is removed.

Once unsuspended, vaibhavkhulbe will be able to comment and publish posts again.

Once unpublished, all posts by vaibhavkhulbe will become hidden and only accessible to themselves.

If vaibhavkhulbe is not suspended, they can still re-publish their posts from their dashboard.

Once unpublished, this post will become invisible to the public and only accessible to Vaibhav Khulbe.

Thanks for keeping DEV Community safe. Here is what you can do to flag vaibhavkhulbe:

Unflagging vaibhavkhulbe will restore default visibility to their posts.