Over thousands of years, dogs helped humans hunt and manage livestock, guarded home and farm, and played critical roles in major wars. The contrast of talent and apparent patterns along with emotional contact between dogs and humans created more than 350 distinct breeds, each of which is A closed reproductive clan that reflects a set of specific characteristics. In this project, I build a convolutional neural network (CNN) that can classify the breed of dog from any user-supplied image. If the image is of a human and not a dog, the algorithm will provide an estimate of the dog breed that is most resembling.

Some people are planning on registering pets that aren’t actual dogs.

You need to use an already developed Python classifier to make sure the participants are dogs or human.

Using your Python skills, you will determine which image classification algorithm works the "best" on classifying images as "dogs" or "not dogs".

If you are confused by the term image classifier look at it simply as a tool that has an input and an output. The Input is an image. The output determines what the image depicts. (for example: a dog). Be mindful of the fact that image classifiers do not always categorize the images correctly.

I take many algorithm takes to solve the classification problem .With computational tasks, there is often a trade-off between accuracy and runtime. The more accurate an algorithm, the higher the likelihood that it will take more time to run and use more computational resources to run.
For this image classification task you will be using an image classification application using a deep learning model called a convolutional neural network (often abbreviated as CNN). CNNs work particularly well for detecting features in images like colors, textures, and edges; then using these features to identify objects in the images. You'll use a CNN that has already learned the features from a giant dataset of 1.2 million images called ImageNet. There are different types of CNNs that have different structures (architectures) that work better or worse depending on your criteria. With this project you'll explore the three different architectures (VGG19, Resnet50, InceptionV3, or Xception) and determine which is best for your application.

Certain breeds of dog look very similar. The more images of two similar looking dog breeds that the algorithm has learned from, the more likely the algorithm will be able to distinguish between those two breeds. We have found the following breeds to look very similar: Great Pyrenees and Kuvasz, German Shepherd and Malinois, Beagle and Walker Hound, amongst others.

The rare and widespread origins of the breed of dogs 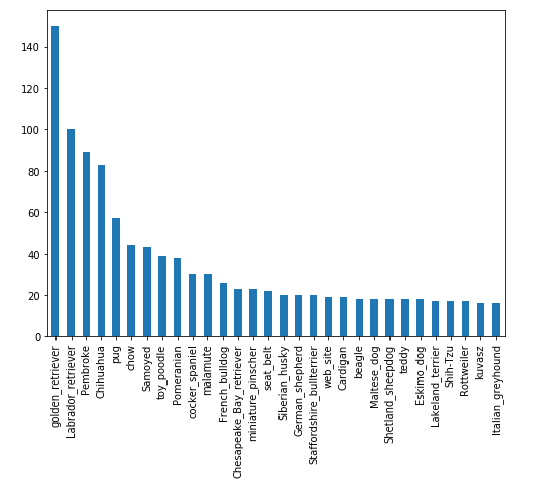 What is CNN (Convolutional Neural Networks) ?

The model learns by applying the small convonet or window by sliding over the full image and tries to learn the specific patterns as per our filter matches. With each convolutional layer, our model first learns small details of the image such as lines, curves, object edges etc. And as it traverse deeper into layers, model learns for more complex figures and parts of images.

How the layers work?

In notebook, you will make the first steps towards developing an algorithm that could be used as part of a mobile or web app. At the end of this project, your code will accept any user-supplied image as input. If a dog is detected in the image, it will provide an estimate of the dog's breed. If a human is detected, it will provide an estimate of the dog breed that is most resembling. The image below displays potential sample output of your finished project (... but we expect that each student's algorithm will behave differently!). 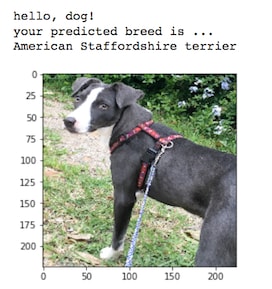 In this real-world setting, you will need to piece together a series of models to perform different tasks; for instance, the algorithm that detects humans in an image will be different from the CNN that infers dog breed. There are many points of possible failure, and no perfect algorithm exists. Your imperfect solution will nonetheless create a fun user experience!
The Road Ahead
We break the notebook into separate steps. Feel free to use the links below to navigate the notebook.

You can return to the code via the my github

Furthermore, for increasing the accuracy of our model- we can use Data Augmentation during the train data. As in the images, the dog image can be vertically or horizontally positioned anywhere in the frame. Also the image can be at an angle with partial visibility. So, augmentation can also add to increase our model’s accuracy.

How to survive (and thrive!) in software engineering interviews

Does Studying For Whiteboard Interviews Make You A Better Engineer?

What Is Server-Side Rendering?