Do you have weird desires to do things in shell that shouldn't be done in shell? your opinion doesn't matter, I have already written the blog post :P

Before we venture any further, please be reminded that the wonderful websocat exists, there is really no reason to do this in shell (except for fun :)

Why would anyone do this?

Live reloads for web projects are pretty standard nowadays. If you are already using socat as SimpleHTTPServer, it is only logical to also use socat to notify client side to reload :D

In this case, a complete WebSocket server is not necessary. I only need to send messages to the client, and don't need to handle incoming messages, which make the data flow way easier to handle (easier to handle in socat+shell, it probably doesn't make much difference in other languages).

I was mostly referencing this blog post by another nice gentleman on implementing WebSocket server in ruby, so for those who want to learn more about the boring details, you know where to go.

If you have sniffed WebSocket request-response before, you can probably recognize that WebSocket request is actually a normal HTTP GET request. And the response first has a header section, just like a normal HTTP response, followed by the payload. And for our server-to-client only scenario, it look just like (and in essence, is) Server-sent events, with data dripping to the client unidirectionally.

To handle the request, we could utilize socat's SYSTEM address type to echo out the Header,

But if you actually tried this, you will find that life is never that simple.

You see, there is a special header called Sec-WebSocket-Accept that the browser will validate to ensure that our life isn't that easy.
From MDN the algorithm to generate this is:

Well that seems doable, we can grep the key from request header and printf to append the magic string, then we have sha1sum to get the hash and base64 for encoding, how hard could it be?

Well... I have no idea why head -n1 got stuck and couldn't close the stream1. But grep already has -m NUM to stop reading a file after NUM matching lines, that should suffice. 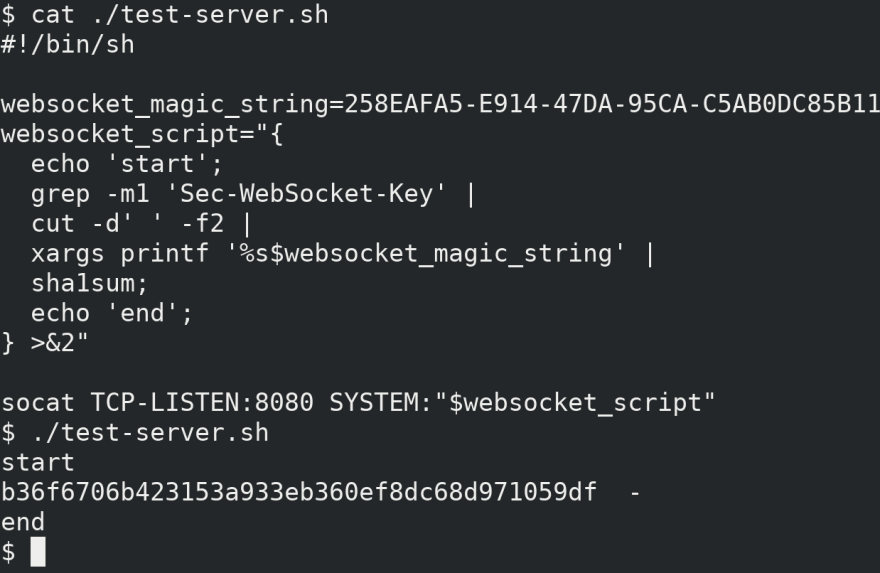 hum... I think base64 takes binary as input. But that looks like hex?

xxd to the rescue

It was indeed hex. A quick google tells us we can use xxd to convert between hex and binary.

Now we have everything we need to get the hashed key: 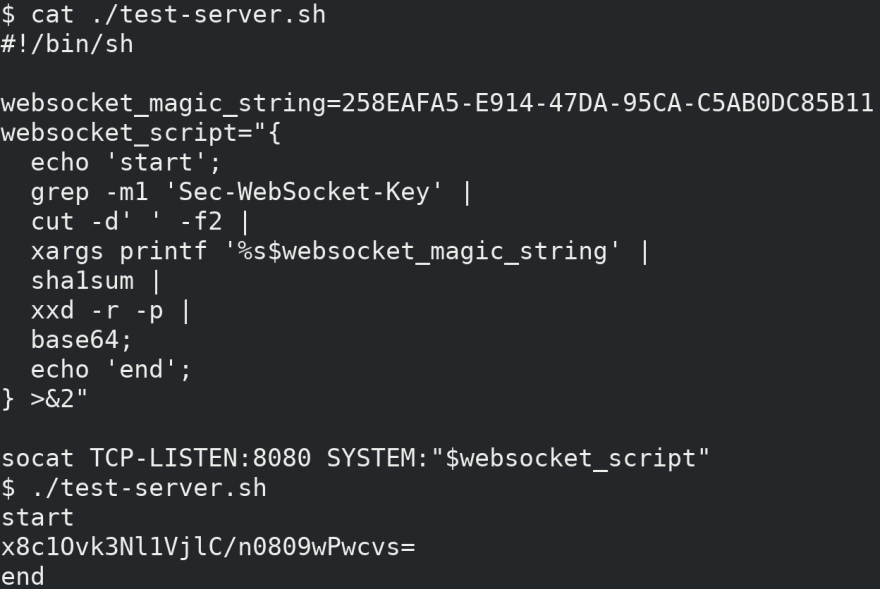 And plugging it into other echo statements should just work TM 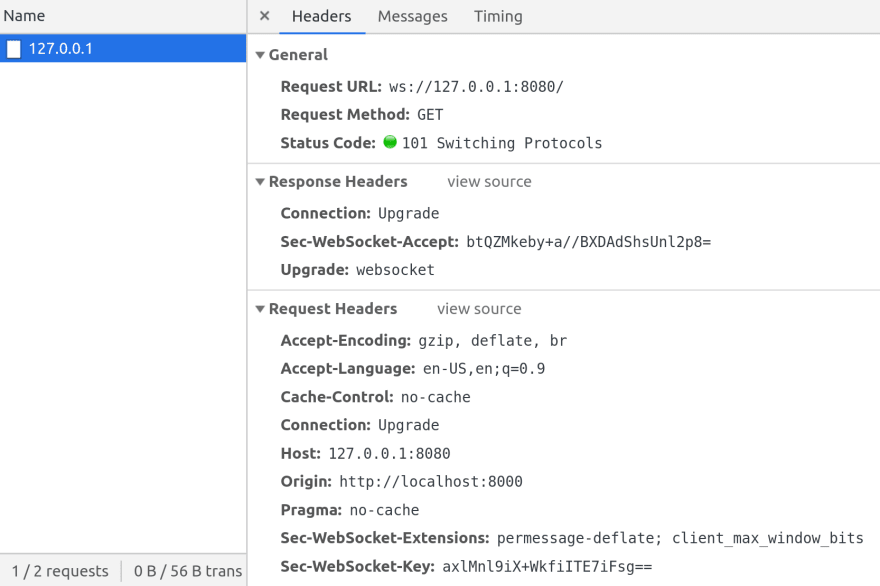 Now with the easy part out of the way, let's see how to format a WebSocket compliant payload.

(again, you can read the blog post I am referencing for details)

The first part was easy enough, just printing a char2 on screen. However there are no type or type cast in shell, we only have raw byte and raw bytes that happen to be printable.

printf to the rescue

printf is capable of printing printable and non-printable characters with escape sequences, making it especially useful for showing raw bytes. Like printf '\n', running printf "\\$(printf %o '65')" will return "A". This gives us the ability to print the bitmask and handle the first case.

For the second part, we need to coerce a string of decimal digits into two char, representing the decimal value.
For example, we should convert "16737" into "Aa".

You may have noticed that we essentially need to convert the decimal value into binary bytes (as opposed to a single char, meaning the printf trick doesn't work anymore).
We will need to change the radix of the number, so brush up your math skills and prepare for some fun.

dc to the rescue

Instead of showing off my non-existent math skill here, a basic desk calculator should do the job. And by desk calculator I mean dc (stands for desk calculator), it conveniently has parameters to control the input/output radix. With a simple dc -e "16 o $size p" you too can safely forget how to do math!

Luckily we are trying to represent unsigned integer, which mean the leading bits are zeros. If we add enough zeros and take from the end, we don't even need to calculate how many zero to prepend.

Now we have some hex string, If only there is a way to convert between hex and binary...

With that, followed by printing the actual text, we are now able to send a WebSocket compliant payload data.

Now having the main chunk of code done, We can go through some remaining "minor" issues.

Normally socat only accepts two addresses, so only 2 out of "STDIO", "TCP-LISTEN", and "SYSTEM". Since the server itself is a must, that leaves us choosing between stdin and our script.
Fortunately, fork-ed command inherits parent's file descriptor. We can duplicate stdin to a new file descriptor and reference it inside the command.

A drawback is that due to stdin being a stream, if we have multiple copies of "SYSTEM" (by running the server with fork option), only one of them will actually receive the message. Of course we can instead write to a normal file and have the commands tail -f from said file, or even use socat to run another UDP server. However I find these solution less appealing, and, in this use-case, I can live with only having a single client.

We commonly use socat TCP with the option crlf, which means socat will prepend \r before each \n. But if you think this is a common use case, you are in for a surprise (or I am very interested in what do you commonly use socat for).

Since we are sending integer as char, when our message size is 10, we will be sending the 10th ascii character — the new line character. After which socat will make our life miserable by prepending extra data. So we will have to drop the crlf option and attach \r ourselves.

Since xxd isn't portable3, we will have to find a replacement. As we previously discovered, printf is fully capable of printing raw bytes, but we will have to split each char worth of hex digit in advance.

We can use sed 's/../&\n/g' to replace each two characters with themselves plus a new line, or we could use a simpler fold -w2 to do the same.

That’s it. For those who want to implement client-to-server message handling, maybe you will be able to do that with dual type address and some named pipe. But then again, Why would anyone do that ;)

Moving away from Ubuntu: peeking at FreeBSD (Part 2)

How to add system call (syscall) to the kernel, compile and test it?

Moving away from Ubuntu: peeking at FreeBSD (Part 1)

wc-rs: A faster port of unix wc in Rust