In this article, we are going to talk to Jason Turner, one of the CppCast founders. CppCast is the first podcast for C++ developers by C++ developers. From 2015 to 2022 CppCast had weekly conversations with C++ conference speakers, library authors, writers, ISO committee members, and more. Keep reading to learn about the CppCast backstory. You would find out one of the most entertaining YouTube channels about programming and some tips for C++ developers. 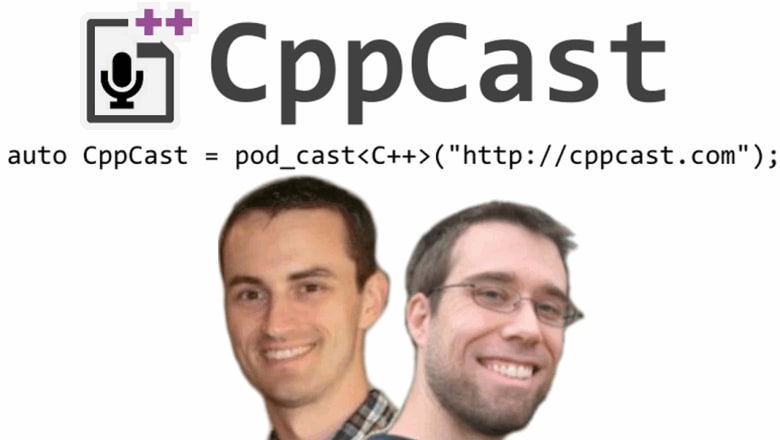 There is such a wonderful podcast — CppCast. Or rather, there was. In May 2022, on the 349th episode, Rob and Jason announced the podcast would be going on an 'indefinite hiatus' after 7 years of regular episodes. This made us feel sad for several reasons. First, we had enjoyed their podcasts for years. And second, we had been collaborating with them to promote PVS-Studio and even published some episodes in text format to share with our blog's readers. So, we decided to email Jason and to talk to him. Enjoy reading!

Hello, Jason! I'm sure our readers know what CppCast is and have come here to learn its story and fate. Before we begin, we'd like to hear more about you and what you're doing now. Chances are even regular CppCast listeners may know you just as "Jason, the podcast host." :). So, could you tell us more about yourself? What do you do now and what did you do before you decide to stop CppCast?

I kind of do a little bit of everything at this point. I have published a book on C++ Best Practices [1] as well as 7 C++ related puzzle books. I have C++ Weekly, my YouTube channel, that I started shortly after I joined Rob on the podcast. I speak at conferences. I do code reviews for clients. I have several open-source projects. I teach classes for companies. And I do C++ contracting.

In your reply you mentioned in-person training. Do you have a group of students?

I have had many different groups of students! Companies will contract me to come into their office and teach various aspects of C++ to their developers. I mostly focus on Best Practices, but have a wide variety of material I can teach. I always give a highly customized and highly interactive class, and love traveling and seeing new parts of the world because of C++.

Could you tell us why did you choose the C++ language? How did fate bring you together with C++?

I really don't remember what specifically interested me in C++. It might have been seeing Dr Dobb's Journal [2] on store shelves back in the early 90's and just this general impression that somehow C++ was the "best" programming language.

Whatever that was, it stuck with me, and in university and when looking for jobs after graduation I sought out C++.

Could you share the history of CppCast with us? Why have you decided to create the podcast?

The creation of CppCast was 100% Rob Irving. Rob started the podcast and asked Jon Kalb if any of the upcoming speakers at C++Now (2015) were interesting in being guests. I had coincidentally ended up with a gap in my contracting work, and had free time available. So, I said "yes" to the invitation to be a guest on CppCast. I was the guest for the second episode ever. Then I noticed that Rob kept asking if anyone wanted to be a co-host. I volunteered to become that co-host, and the rest is history. I co-hosted with Rob from episode 5 through episode 348.

Could you describe the most unusual or surprising CppCast episodes?

The most surprising one that always stood out was the first episode with Jonathan Muller. We were both very surprised to learn at the end of the episode that Jonathan had not even started University yet!

We of course had many memorable moments on the show. For example, Scott Meyers discussing his retirement from C++, and Andrei Alexandrescu discussing moving to full time work on the D programming language.

Now one of the major questions: why and when did Rob and you decide to stop the CppCast project?

We both agreed at the same time that it was time to move on to other things. Hosting CppCast has been great. We had met many wonderful people, and it had opened the door for me with many amazing opportunities. But it was time. We had been working on the podcast for 7 years consistently, and it was time and OK to move on to other projects. I do recommend that anyone interested listen to our final episode where we discuss our decisions.

Have you considered delegating this project to someone else?

That has been discussed, and if anyone approached us with a reasonable proposition to take over the podcast, we would consider it.

It's a pity that now when you try to open cppcast.com, the following warning appears: "Invalid certificate name: The name is not included in the allowed list or is explicitly excluded from it. View the certificate.". Are you planning to renew the certificate?

Yes, that has been fixed now.

We'd like to ask you more about your current YouTube channel — C++ Weekly. Could you please tell us why did you decide to create a channel? Does it feel different from CppCast? Perhaps you just had an idea to implement something like CppCast but in a bit different way?

I actually have been doing C++ Weekly for over 340 weeks now. I started it within the same year of joining Rob for CppCast. I don't really remember what my motivation was when I started it.

I know that part of it was that I still had extra time available, and I was trying to just do something interesting with my time. And now, 340 weeks (and episodes!) later, I have created a huge library of information about C++.

Many times in my career periods of unemployment or underemployment have led to new and interesting opportunities, CppCast and C++ Weekly were both borne from those times.

The following is just a note rather than a question. I noticed that over the last year you have published several episodes related to constexpr (Ep 339, 315, 313, 312, 301). So, we recently published the related article "Design and evolution of constexpr in C++". Perhaps you may find it interesting too. Or maybe you will get new ideas for your future videos :).

That article looks quite complete for the history of constexpr. I see it even references the influential talk that Ben Deane and I did ("constexpr All The Things!") back in 2017.

And starting just this month, I've even created a "constexprt" t-shirt, as a fun play on combining "constexpr" and "expert". You can find a link to that here: https://my-store-d16a2f.creator-spring.com/.

As a youtuber, can you recommend other channels that you think deserve a shout-out for C++ readers?

Ironically, I don't tend to watch YouTube videos about programming. However, I can suggest that a good start is to subscribe to all of the official YouTube channels from conferences: CppCon, CppNorth, CoreC++, C++Now, C++ On Sea, etc.

Btw, have you tried our C++Quiz? You may find it entertaining.

That is fun, it's interesting to try and spot the same errors as the tools can find.

Thanks, we tried to show how our static analyzer can detect not-so-obvious errors.

Unfortunately, we haven't received a reply from Rob (co-founder of CppCast). Jason, do you know what he does now?

As far as I know, Rob is still doing the same job he was doing when we ended CppCast. For me, CppCast was part of my career. For Rob, CppCast was just a community service. It never earned a lot of money or anything like that. Rob deserves a huge amount of thanks and respect for creating the podcast at the right time, and with the right format. He created this incredible community service that impacted many careers, both through education and visibility. He helped books and products become successes by giving them a spotlight on the podcast. He had a huge impact on the C++ community, and I still feel the effects of this impact when I attend a conference and so many people come up to me and thank me for being a part of CppCast.

We are very happy to hear from you. Thank you for your response and such a fascinating talk. I believe readers will be inspired by your thoughts and will learn some C++ and programming tips through your podcasts and YouTube channel or even create their own.

C++ or Blueprints: pros and cons, when to use one or the other?