In this blog post, I'll share how to host multiple static websites in a single S3 bucket, where each site is stored in a single directory (path).

CloudFront will serve the static website, and the trick to fetch the relevant site from the origin, S3 bucket, in this case, relies on a Lambda@Edge function.

By the end of this blog post, I expect to have two live websites, which are stored on a single S3 bucket, and I want proof. 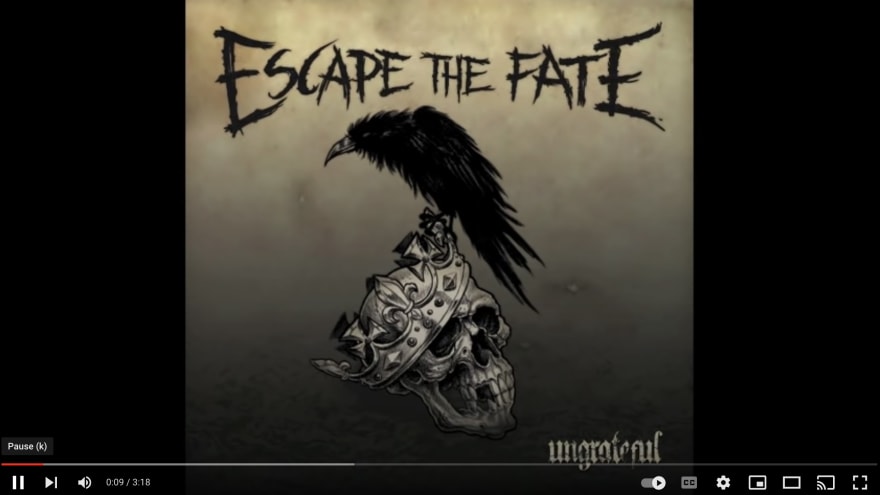 Escape the Fate - "One For The Money"

This step is optional if you already own an eligible ACM Certificate in the AWS region N.Virginia (us-east-1).

I own the domain meirg.co.il, so to avoid breaking my site, I'm adding another subdomain, and I'll name it multiple-sites, which makes my FQDN

Additionally, I want to support accessing the site with www or any other subdomain (maybe api), so I'll add another FQDN 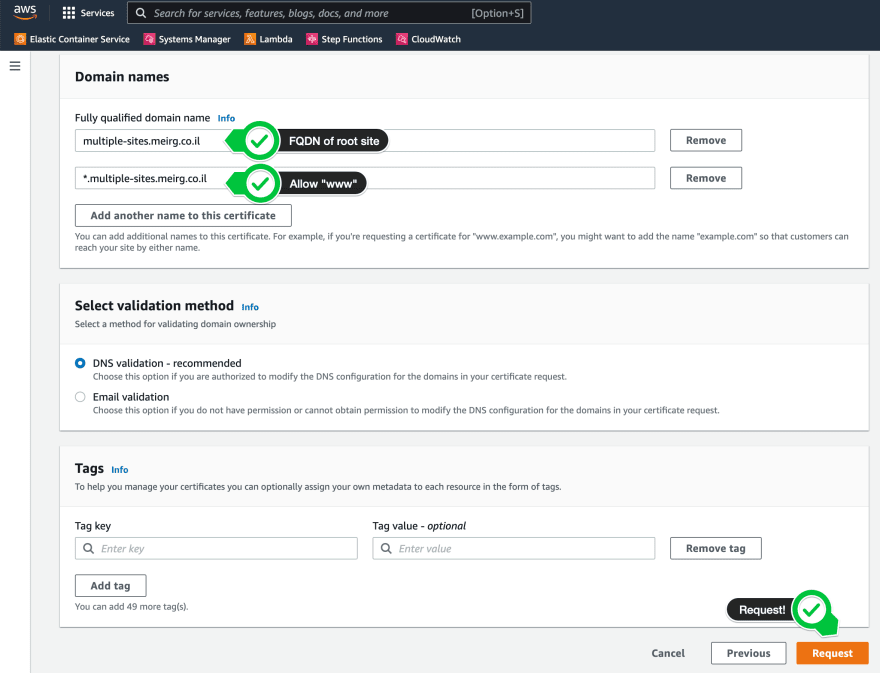 Now I need to validate the certificate in my DNS management provider; in my case, it's Cloudflare (flare, not Front 😉)

Then, I copied the CNAME+Value that was generated in ACM

And then, I created two new DNS records in my DNS management provider (how to do it in AWS Route53). Here's how it looks like in Cloudflare:

NOTE: Cloudflare provides a native CDN solution per DNS address, which is fantastic. As you can see, I turned it off (DNS Only) since it's irrelevant for the DNS validation.

And then ... I wonder if all those "and then" reminded you Dobby from the Harry Potter movie 🤭

I got into big trouble; my certificate failed to validate

Even though this part is not directly related to this blog post, I'm putting it here for future me (or the currently frustrated you who found it). Bottom line, I fixed it by reading How to Configure a CAA record for AWS and created the DNS records accordingly in Cloudflare. 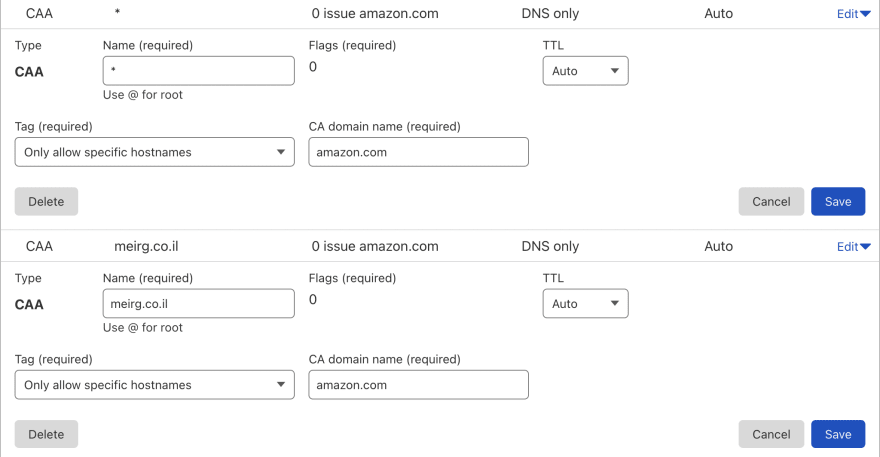 Finally, my ACM certificate is eligible, and all DNS records were validated successfully, thanks to the CAA records created above 🙇🏻‍♂️

This part is relatively easy if you're familiar with AWS S3, though I do want to emphasize something -

An AWS S3 bucket is an object storage; hence it cannot be served to a browser unless set to AWS S3 Static Website.

NOTE: S3 is an object storage, so directories (paths) aren't really "storage locations", but more like pointers that state where the data is stored in an organized way, like filesystem storage.

So why am I double-posting something that is already out there? Because I found it very confusing to realize that the term "static website" and the term "S3 static website option" are different.

By its name, I would expect to enable AWS S3 Static Website Option to make this solution work. It should be disabled.

Here's the thing, AWS S3 Static Website doesn't support CloudFront Origin Access Identity (OAI). As mentioned in the Objectives, the site should be accessed from CloudFront only, which means I need the OAI functionality.

AWS Static Website Option should be disabled when served behind a CloudFront distribution.

A CloudFront invalidation is the part where you purge the cache after pushing static content HTML/CSS/JS/etc., to the S3 bucket.

Later on, when I push new content, I will invalidate the cache to get immediate results. It's either that or setting the CloudFront's distribution TTL to a lower number than the default 86400 seconds (24 hours).

The name doesn't matter as long as it's a valid S3 bucket name and that name is globally available across ALL AWS accounts. 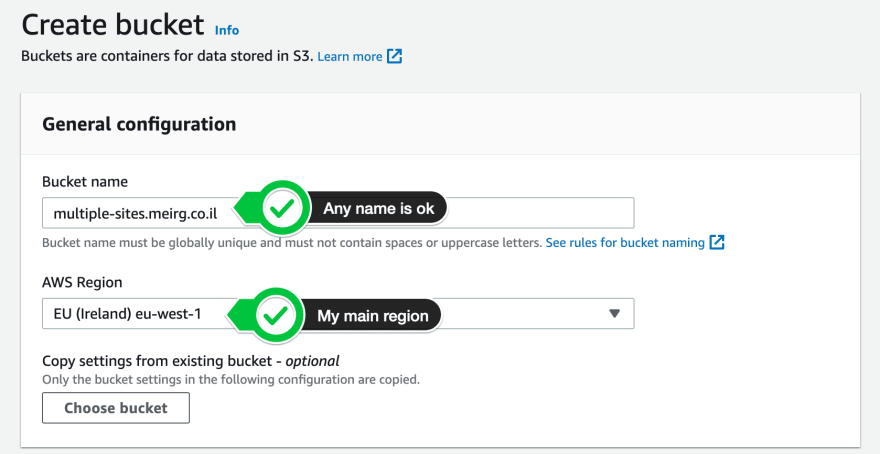 As you can see, I chose a logical name for my bucket (luckily, it was available)

IMPORTANT: The S3 bucket name doesn't have to be the same as your DNS records. If the name is taken, add a suffix like -site or any other logical suffix that would make sense when you search for the S3 bucket by name. In this solution, The S3 bucket is served behind a CDN (CloudFront), so its name doesn't matter.

Scroll down, keep the Block all public access ticked, and set Versioning to Enabled.

By "push", I mean upload; I use the verb "push" because I want to keep in mind that an automated CI/CD process should "push" the content instead of "uploading" it manually via S3 like I'm about to do now.

Following the bucket creation, I've created two directories (folders); as promised in the beginning, each directory will serve a different website.

And then (Dobby again), I've created this dummy index.html file and made two copies, so I can differentiate between the sites when I check them in my browser.

Moving on to the tricky parts - Creating a CloudFront distribution and Lambda@Edge!

As part of this step, we'll also create (automatically) an Origin Access Identity, enabling access for CloudFront to the S3 bucket; Currently, none is allowed to view the websites.

Once you choose the CloudFront service, you're redirected to the "Global" region, don't let it fool you; it's considered as N.Virginia (EU-east-1), creating the ACM certificate in N.Virginia is essential, as it's the same region where CloudFront is hosted. 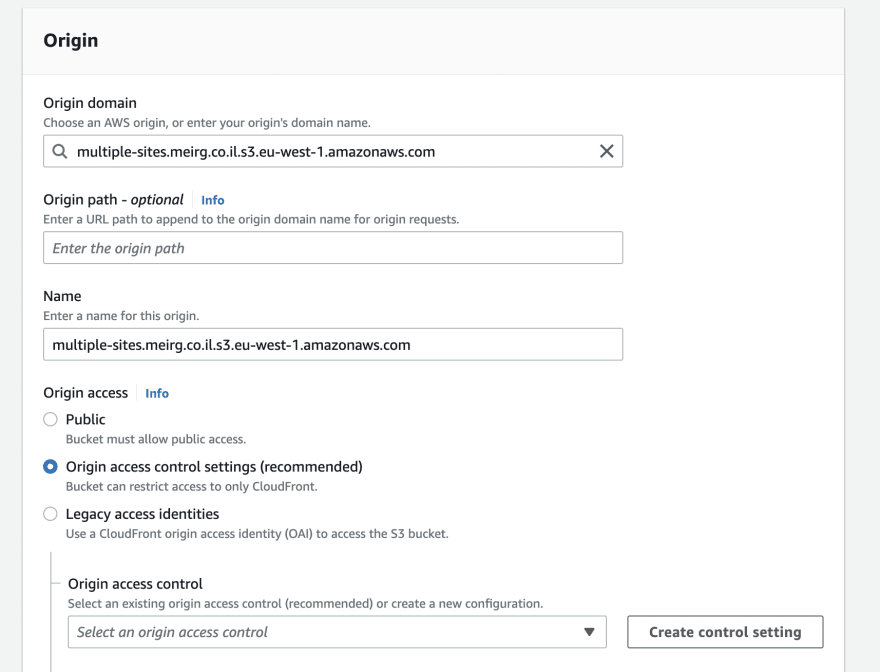 To create an OAI, I've clicked the Create control setting button, and after reading Advanced settings for origin access control, I chose Always sign origin requests (recommended setting) since my bucket is private (future to be accessible only via CloudFront).

NOTE: I also realized that OAI had become legacy, and I should start using the Access Control Setting feature instead. 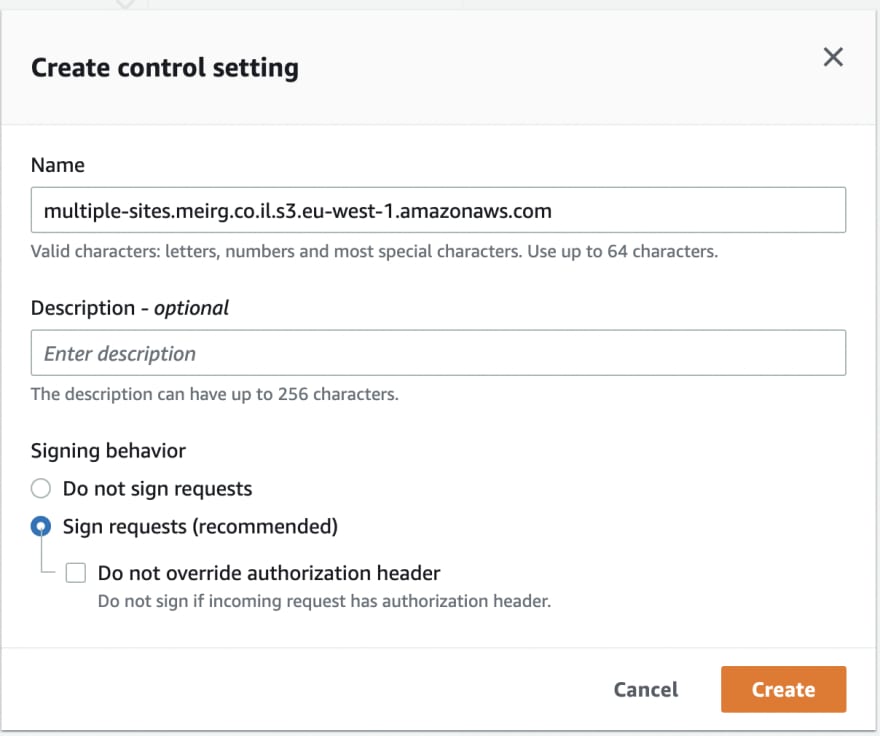 For cache key and origin requests, I've selected CORS-S3Origin, which is a must; otherwise, you'll get a 502 error due to failure of signing requests (try it). 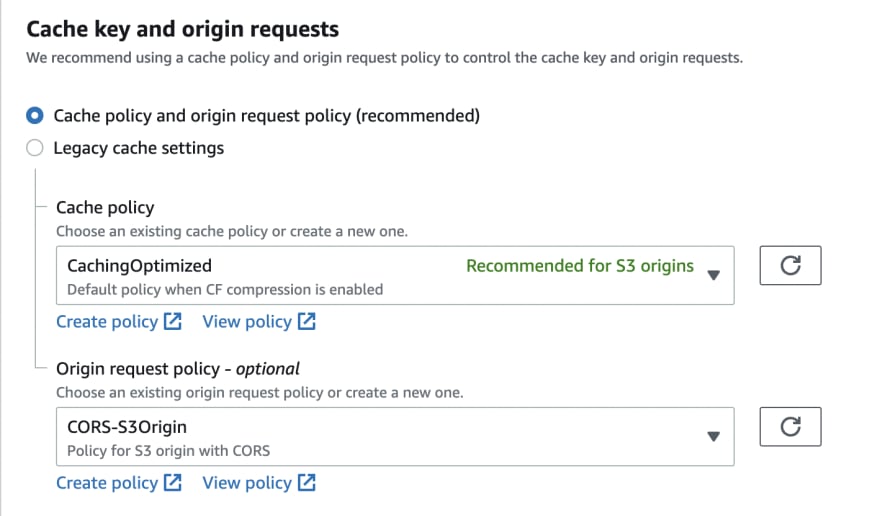 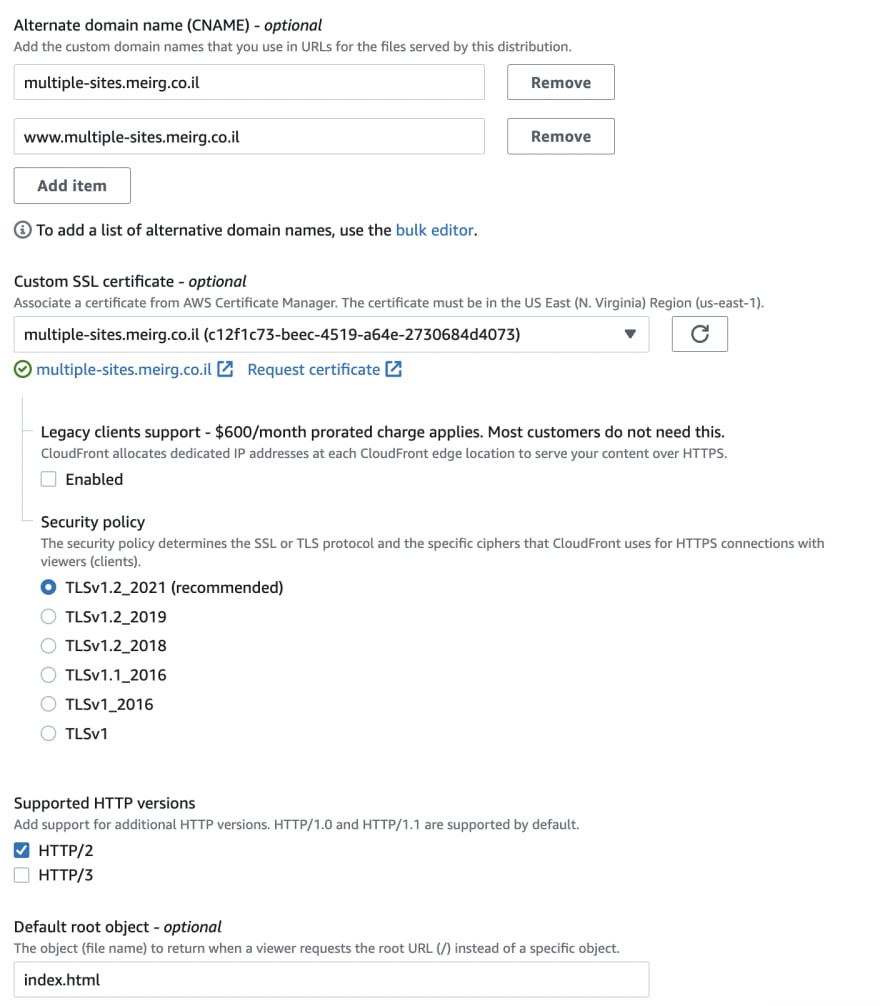 I was surprised by the excellent UX (not kidding); After creating the CloudFront distribution, I got the following pop-up.

As instructed, I clicked Copy policy and the highlighted link Go to S3 bucket permissions to update policy, scrolled down a bit to Bucket Policy, and clicked Edit.

In this screen, I pasted the copied policy, and it got a bit messed up (no idea why), so I made sure the curly braces at the top { and in the end } are not indented at all, and then I was able to click Save Changes (scroll to bottom) without an issue. 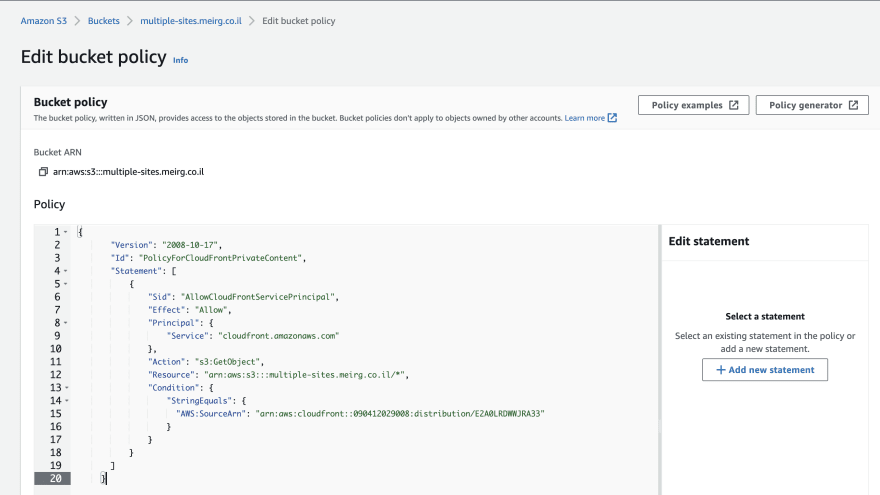 Here's what it looks like after clicking the Save Changes button.

For testing purposes, I've created another index.html file; Remember that I set a Default Root Object during the CloudFront distribution creation? That is it.

The new index.html file is pushed to the root directory / of the bucket; Before moving on to the "site per directory solution with Lambda@Edge" I want to make sure that everything is in place and that https://multiple-sites.meirg.co.il works as expected.

The FQDN is still unavailable as I haven't added the DNS record in my DNS Management Provider (Cloudflare); As of now, none knows that my website multiple-sites.meirg.co.il should point to the created CloudFront distribution.

Copied the CNAME of the CloudFront distribution

And created a new DNS record for that CloudFront distribution CNAME; Since I'm already using CloudFront as a CDN, I prefer to disable Cloudflare's proxy feature, as It'll be CDN to CDN, which sounds like a bad idea.

It worked 🥳 but that's not why we're here for! Moving on to the multiple directories magic. Why magic, you ask? The nested paths /site1,/site2 are restricted/forbidden; here's how accessing /site1 looks like at the time of writing this blog post:

Writing code is excellent; copying from someone else and understanding what it does is even better. After Googling a bit, I stumbled on Implementing Default Directory Indexes in Amazon S3-backed Amazon CloudFront Origins Using Lambda@Edge
contains the exact code that I need.

I copied the snippet from the mentioned site and removed the console.log; I'll add them back if I need to debug.

How Does The Lambda@Edge Work?

By default, if an origin request URI doesn't contain file path, like navigating https://multiple-sites.meirg.co.il/site1/; An error will be raised since there's no default setting for sub-directories to use the hosted site1/index.html.

So why does it work when I navigate the root path of the bucket https://multiple-sites.meirg.co.il/? Because I've set the Default Root Object to index.html in the CloudFront distribution. That "fixes" the issue for a single website hosted at the root of an S3 bucket.

When it comes to multiple websites stored in the same S3 bucket, we need a mediator/proxy that will convert the origin request URI from / to /index.html, which is precisely what the above-copied code snippet does.

Go ahead and create a Lambda Function in N.Virginia, and keep the default settings "Author from scratch > Node 16.x", reminding you that the Lambda Function's code snippet was in JavaScript. 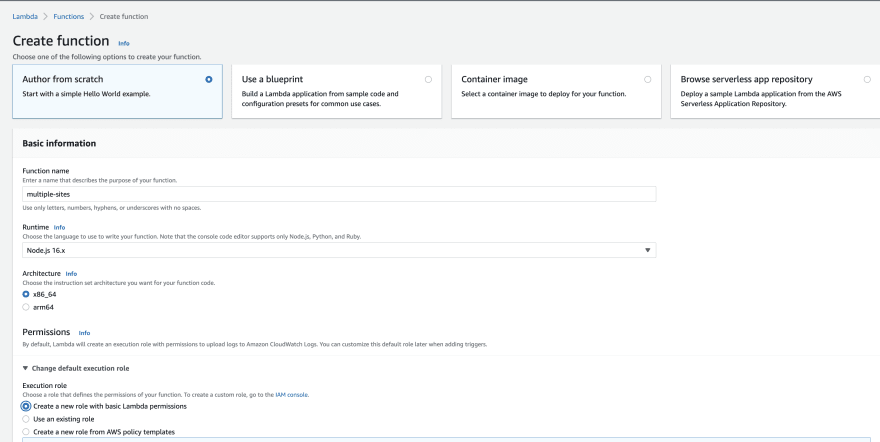 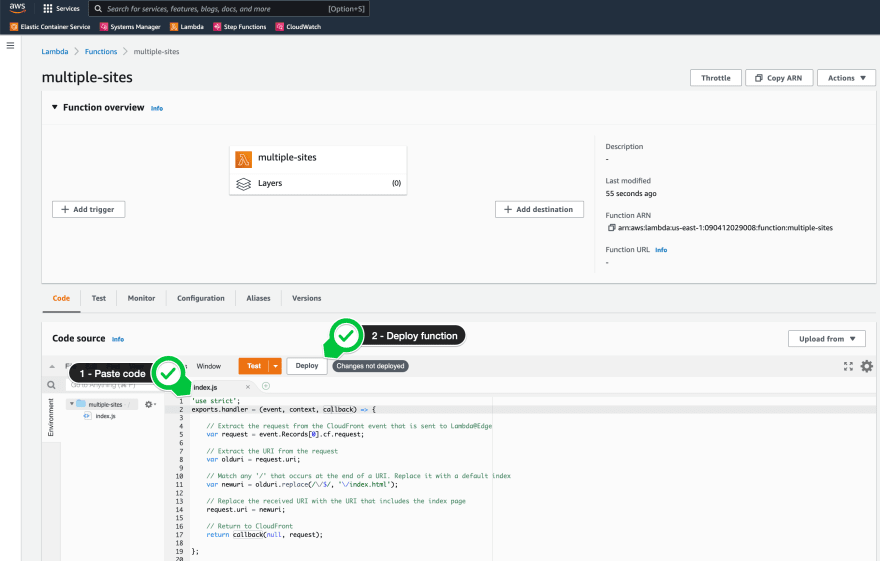 This step is mandatory as Lambda@Edge functions are referenced with versions, unlike normal Lambda Functions can be referenced using the $LATEST alias.

Deploy Lambda@Edge To The CloudFront Distribution

Navigate back to the function and
Deploy to Lambda@Edge! 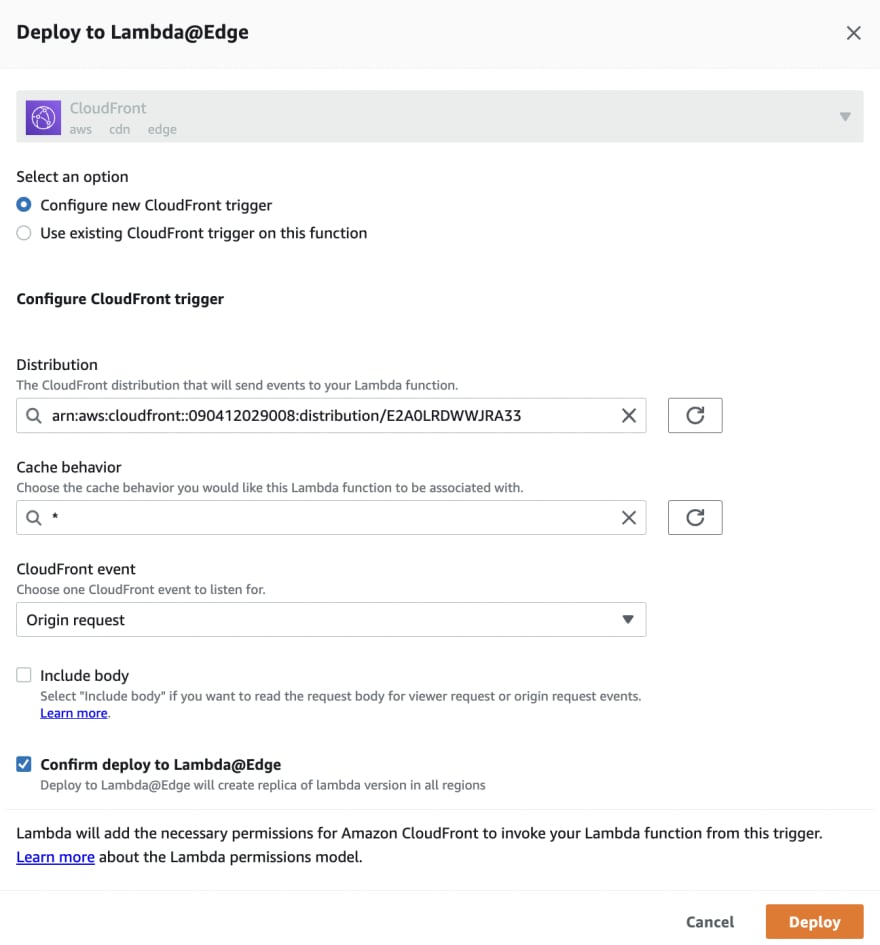 I clicked Deploy (with excitement), and then I got this pop-up message:

Correct the errors above and try again.
Your function's execution role must be assumable by the edgelambda.amazonaws.com service principal.

Hold on a sec; I need to add a Trust Relationship, so CloudFront is allowed to execute the function. Googling a bit got me here - Setting IAM permissions and roles for Lambda@Edge; the copying motive continues as I copied the IAM policy from that page

After that, I edited the Lambda Function's IAM role Trust Relationship.

Let's try to deploy the Lambda Function again ... And of course, another error ...

I'm not sure if I did it or if it happened automatically. Still, I think it's important to document it - initially, I got to the 403 Forbidden page when trying to access https://multiple-sites.meirg.co.il/site1/, so I checked the CloudFront distribution and found out that the S3 origin is set to Public, and I have no idea how or why that happened. So I changed it back to Origin access control settings (recommended), and everything works as expected.

Initially, I wanted to use an Origin Access Identity (OAI) to restrict to CloudFront only. Then I discovered that OAI is considered legacy, so I proceeded with Access Control, and I'll probably migrate all my OAI resources to Access Control.

I left out (for now) the "S3 redirect from www" part because this blog post is already overkilled.

Getting Started with the Vue Signature Pad Component

Once suspended, unfor19 will not be able to comment or publish posts until their suspension is removed.

Once unsuspended, unfor19 will be able to comment and publish posts again.

Once unpublished, all posts by unfor19 will become hidden and only accessible to themselves.

If unfor19 is not suspended, they can still re-publish their posts from their dashboard.

Once unpublished, this post will become invisible to the public and only accessible to Meir Gabay.

Thanks for keeping DEV Community 👩‍💻👨‍💻 safe. Here is what you can do to flag unfor19:

Unflagging unfor19 will restore default visibility to their posts.