Grafana sports a feature called Annotations that allow you to label a timestamp on a dashboard with meaningful events – most commonly deployments, campaigns, or outages:

(In this case annotating the simulated deployment of a FluentBit container, which I’ve used to forward container logs out of the cluster.)

Annotations can be input manually, but the only recommendations I’ve seen to generate them automatically is to use something like Loki, or teaching your CI/CD system to interact with Grafana’s web API. However, if you’re running a simple Prometheus + Grafana stack (say, using the Prometheus Operator on Kubernetes), you might be reticent to add more complexity to your setup just to get deployment annotations.

Fortunately, there’s a simpler alternative for this narrow case: you can use the process_start_time_seconds metric from Prometheus to get an approximate idea of when apps or pods were started. I haven’t seen this approach recommended elsewhere, which is the purpose of this post.

It turns out that process_start_time_seconds is exposed by almost all applications because it’s one of the standard metrics recommended by Prometheus itself and is exported by most client libraries automatically (including my own).

You can add annotations like the one in the image above as follows, assuming you have a namespace and pod template variable defined: 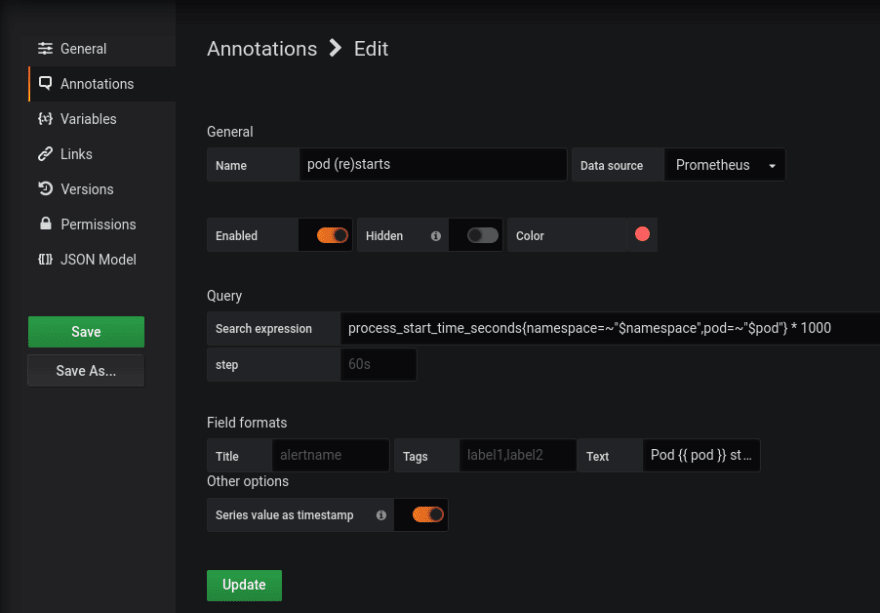 It’s important to understand that these annotations will show only when new processes are started, most likely because of a deployment but also during rescheduling, scaling, or a pod failure – but since it is likely that you’d want to know about those as well, perhaps that’s a good thing.

Running Kafka on Kubernetes for local development with Storage class

Aaron Jacobs
Do you remember the FIRST project made by you?
#discuss #showdev #webdev #programming
Pitch me on C++
#cpp #discuss #pitchme
Why We Hate…
#career #culture