This article is written with the intension of providing a brief understanding on Quantum Computing. This is because it is one of the main topics that is currently being evolved at a high rate and it is considered as the future of the field of Computing.

Quantum Computing is one of the main fields that use the Quantum theory. In the study of physics, the term Quantum means “the minimum amount of any physical property involved in an interaction”. Quantum theory is basically a discussion about the particles that are in atomic and subatomic levels and it was first presented by physicist Max Plank in 1900.

Quantum Computing is a field that uses the principles of Quantum theory for computational purposes. This uses Qubits instead of bits. Qubits (or Quantum bits) which is the fundamental unit of Quantum Information that can also have a state that would be a linear combination of 0 and 1. Due to the use of qubits, Quantum computing is more advance than the classical computing.

Below figure shows an explanation of the difference between a Classical bit and a Qubit. 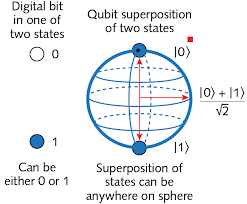 The 3 main Quantum Properties that are used in Quantum Computing are,

Using these Quantum properties, Quantum Computers were designed to do the Quantum computations. These computers use the quantum states to manipulate all possible solutions for a given problem. As qubits must be kept cold to work with them for very long time periods, Quantum Computers are designed in a way such that they can perform at temperatures near absolute zero. ‘Dilution refrigerator’ that is built inside these computers creates a suitable environment for the qubits.

Below figures depict the internal & external structure of a Dilution refrigerator. 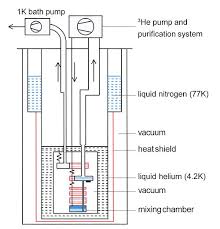 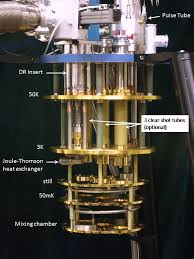 There can be many motivations for the scientists to develop the concept of ‘Quantum Computing’ which led to the creation of ‘Quantum Computers’. One of the main motivations is that to carry out the "Double Slip Experiment" that explains the principle of quantum superposition. It was observed that the photon which is a quantum particle can be in 2 states at the same time in this experiment. Therefore, a Quantum Computer was considered to be needed to carry out this experiment. Another motivation for the development of Quantum computing is the “Shor’s Algorithm” for large numbers because it required a very long time to factor a very large number into its primes.

The history of Quantum computing starts from the 1920s and can be explained as follows,

This was followed by several other improvements in the next years.

Quantum computing is still being developed so that it could assist in many fields to improve their efficiencies by several companies including IBM, D-Wave, Google, HP, Intel, & Microsoft.

Below is given an image of the IBM Q System One. 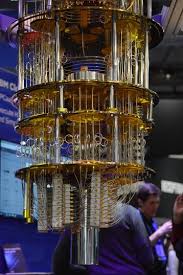 Quantum Computing can be applied in various fields to increase the efficiency in those respective fields. Some of them are Quantum Simulation in Medical Science field for drug research and Quantum Cryptography to provide quantum-ready encryption. Several other fields such as Industry, Business, Technology, Health sectors can also be optimized.

Main advantages of Quantum Computing are high storage space, faster execution of tasks than classical computers and ability to increase the efficiency level of the fields it is applied in. It also has some disadvantages such as having a very high cost and having a risk of being able to perform according to their wish against human laws. Therefore, it is required to develop security precautions to provide protection against this risk.

Quantum Computing is the next level of futuristic computing which is being developed and we should be able to understand its functionalities in order to work in parallel with it.

Striver's SDE Sheet Journey - #10 Find the duplicate in an array

Once unpublished, this post will become invisible to the public and only accessible to Marita Thushari.

Thanks for keeping DEV Community 👩‍💻👨‍💻 safe. Here is what you can do to flag ucscmozilla: