This is effectively part two of an earlier article I wrote, "DTS", that described a composition of service-oriented architectures, or SOA, using Docker Compose and an nginx-based reverse-proxy. The article can be read here:

But deploying a stack like this "in the wild" means there are several other related components that would need to go with it. Putting these elements together gives us a nicely-organized six-element software engineering pattern that has been incredibly useful across a wide variety of projects. I'm calling it a "Dyce" pattern, and if you look at the following diagram, you can probably tell why: 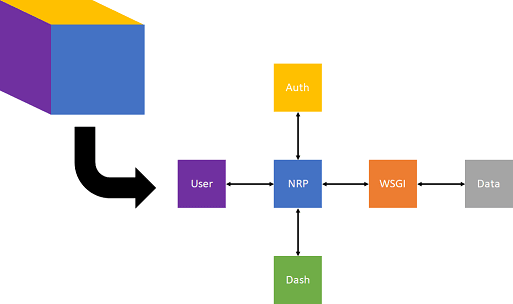 So, we've covered the "user" element, the "wsgi" element, and the "data" element. The fourth element, of course, is "nrp", the nginx reverse-proxy that binds all the elements together and defines (along with the configuration in the "docker-compose.yml" file) the routing rules they use. That means there are two new elements at work here: "auth" and "dash".

Every application needs a way to enforce access control. In our case, we had assumed that public access of the user layer was fine, and that access to the remaining elements would be enforced by the network configuration (blocking direct external access to the database, for example). In the "live" world, this is not realistic. We need an auth/auth service (authentication and authorization) that can be used to control who can access what. As a reminder:

But, we don't want to roll our own. This is one place, given all that is at stake, where you really want to leverage the expertise of a community that knows what they are doing. "DON'T ROLL YOUR OWN SECURITY SOLUTIONS" is a mantra that you should get tattooed on your forehead. Seriously. 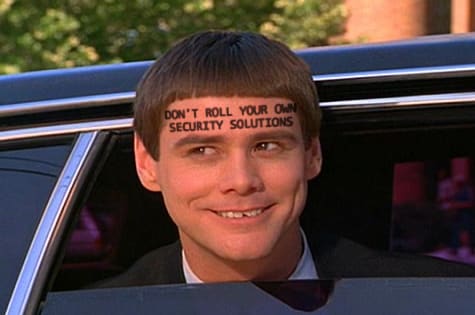 We need something hardened, something verified, and (ideally) something that could easily support both integration with our nginx-based scheme here, perhaps as a form of middleware with minimal modification to the other service configurations, but still give us flexibility to extend across a variety of auth/auth schemes. In other words, we want to use Keycloak:

If you've used Keycloak before, you know why. It's beautifully encapsulated, integrates well, can be spun up with minimal expertise required, and can extend (without significant headache) across a wide variety of auth/auth schemes. From the Wikipedia summary:

Keycloak is an open source software product to allow single sign-on with Identity and Access Management aimed at modern applications and services... [this] project is under the stewardship of Red Hat who use it as the upstream project for their RH-SSO product.

In our case, we'll focus on an OIDC (OpenID Connect) protocol, based on an OAuth 2.0 exchange that maps well to our middleware insertion objective.

But we're not using Apache--we're using nginx, which doesn't have the same well-rounded environment or integration with middleware modules. We don't want to hamfistedly force OAuth exchanges into each individual service, though; we want to enforce it at the reverse-proxy layer, where we can "assert" access control across as much of the architecture as we want.

How do we get middleware-like capability injection for nginx, then? In this case, I decided to extend the reverse-proxy to OpenResty. OpenResty is described as a "full-fledged web platform", but really it's a transparent extension of nginx in an environment that lets you "hook" in Lua-based modules to extend capability with minimal modification to your existing deployment:

It's a beautiful thing, actually, and I would encourage you to mess around with it. The JIT Lua interpreter doesn't add a huge performance penalty to the lean-and-mean production-quality nginx, and (since it's Lua-based) it's an easy matter to install additional modules from the package manager.

First, we need to switch out the base container itself, from "nginx" to "openresty/openresty". If you're starting from the DTS project, you'll find this requires a few other changes to the Dockerfile:

About those scripts. You will glean a configuration from the Keycloak setup later, but for now you can copy-paste from the following file:

Some key things to note:

There are several key path values that may take some trial-and-error:

The "client_id" and "client_secret" values will be specific to your Keycloak configuration; in this case, "client" is the service making a request to the Keycloak instance in order to verify auth/auth of a user. You can assign these values manually, but I find it helps to configure them once within Keycloak then "export" the realm for dynamic loading on container startup, in which case you can set them once in the Lua script and not worry about it again (though the client secret does have to be manually "pasted" back into the realm export file--it is "wiped" by default when the JSON is written).

We still need to "hook" in this file from your "nginx.conf", which requires a few other modifications as well (defining session support, Lua integration options, and a few other things). Again, you can copy-paste from the following:

The magic here mainly happens in the "access_by_lua_block" directive, which is passed off to the Lua interpreter. In this case, it imports and runs the script from "oidc/acc" (acc.lua). The rest is straightforward.

So we've defined OIDC hooks into an auth/auth service, we still need to setup Keycloak instance itself. Before you add a Keycloak container to the compose integration, spin up a standalone instance you can mess around with to familiarize yourself with the configuration options and ontology:

There are several key concepts here:

Note that we don't worry about adding specific users yet. Instead, once you have defined the realm configuration, find the "export" button in the navigation menu on the left-hand side. Ensure "export groups and roles" and "export clients" are both set to "ON" before you click "Export". This should give you a JSON file that looks something like the one from our repo:

Note that you may need to copy-paste the client secret into this file, if the export process masked it with asterisks ("*****..."). You may also have noticed that we didn't see an option to export users. Users are not part of the realm configuration; you have to add them manually (or import them by script from another dataset). You could also point Keycloak to a database where state for these profiles can be maintained (by default, we are using Keycloak's internal database here). Once the Keycloak instance starts up (which takes a while), it will need to copy the realm JSON to load and specify the "frontend URL" to use when users are routed across endpoints:

Okay, a short break is in order. We've walked through a lot--but we're almost there. Take a moment to appreciate how much we did, and how painless it was:

We have one last element to introduce to our pattern. Production (even at the small, docker-compose scale we are using here) requires monitoring. What kind of resources are your containers using? Are they all up right now? How hard is the network being hammered? Have you lost state? Are your databases in danger of running out of disk space?

There are professional monitoring solutions out there for running out of full-up orchestration solutions (K8s, etc.). But at the scale of this pattern, there's a much more simple solution available, defined by a trio of services:

This combination makes for a pretty popular dashboard solution. Since there are technically three containers that we are treating as one service, though, what you'll see if you look at our "Dyce" repo is a "docker-compose.yml" referenced within the main "docker-compose.yml", using the "extends:" directive (which is pretty close to raw magic):

There are a few "tricks" to integrating these together:

You can run each of these individually, or just raise the "docker-compose.yml" file for the trio right off the bat, if you want to play around with them before they are "folded" into the rest of our pattern.

At this point, we have defined two independent services (auth and dash) to extend our pattern with, but not yet integrated them into the top-level compose. This is pretty straightforward for "auth" (aside from the reverse-proxy configuration we already described in detail), and largely identical to all of the other services:

One exception is that we expose the auth service directly to the outside. If we didn't, you couldn't redirect to authenticate! Since OAuth schemes are cross-origin by design, and we don't need to worry about CORS requests to auth from the user application, this is fine (and even desirable).

The "dash" service (or services) is a little more complicated, because each one has to be imported independently. If you haven't done this before, it looks a little like this::

In this case, a top-level service is defined that "extends" another service. Which service? The one defined within a specific compose path ("file:") with a particular name ("service:"). This is a pretty powerful trick.

Once that's done, you should be able to run a docker-compose "up" command on the whole recipe. If you see errors, feel free to clone the Dyce repo, but remember that Keycloak takes a while to spin up, so be patient:

You should see the following:

So what do we have here? We've defined a pattern for service-oriented architectures that is nicely scalable and reusable:

This is pretty neat, and pretty darn powerful. But there's more you could do:

But in the meantime, you've got Dyce.