If you're familiar with .NET, you may have heard of an awesome project called MiniProfiler made by the awesome folks at Stack Overflow.

A simple but effective mini-profiler for ASP.NET (and Core) websites

MiniProfiler for .NET (and .NET Core)

The current major version of MiniProfiler is v4.

To build the MiniProfiler solution in Visual Studio, you'll need:

If you're unfamiliar, you may have gathered from the name it has something to do with profiling code - you wouldn't be wrong!

MongoDB - some love it, some hate it but regardless I use it and I like it for my projects. What I don't like with MongoDB is the C# driver so as an ongoing project of mine, I have built my own wrapper for MongoDB C# driver called MongoFramework. I have written about this library previously here so I won't go into much detail besides saying it makes dealing with MongoDB similar to dealing with Entity Framework.

MongoFramework however is how MiniProfiler and MongoDB meet. You see, MiniProfiler has official packages for profiling EF6 and EF Core but doesn't actually support profiling of MongoDB queries. As I had already written a wrapper around the official MongoDB driver, I was already in a good place to extend my own integration to support profiling. 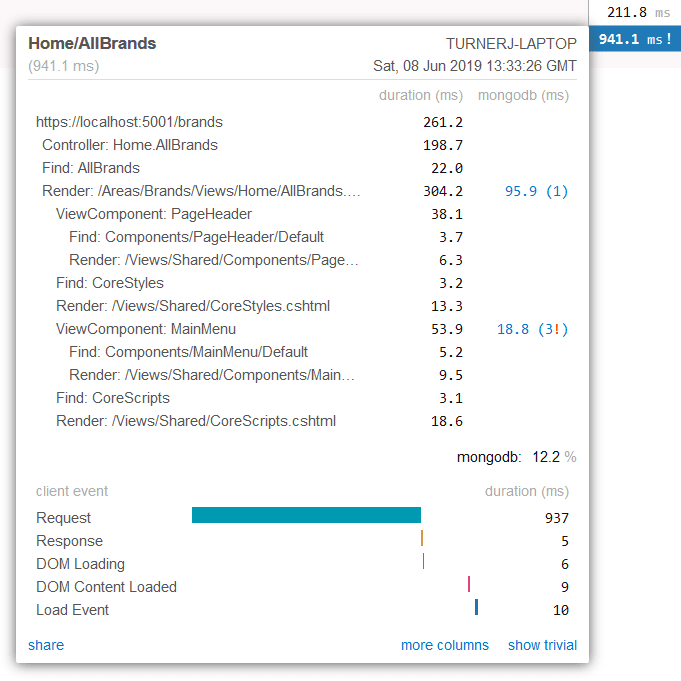 Then this might be exactly what you are looking for! Check it out on NuGet.

An "Entity Framework"-like interface for MongoDB

An "Entity Framework"-like interface for MongoDB

MongoFramework tries to bring some of the nice features from Entity Framework into the world of MongoDB.

Some of the major features include:

These extensions are official packages that enhance the functionality of MongoFramework, integrating it with other systems and tools.

The core mapping of entities and their properties…

Ok! So... The drawing app to express, grasp, and organize your thoughts and ideas

Go EventSourcing and CQRS with PostgreSQL, Kafka, MongoDB and ElasticSearch 👋✨💫

Once suspended, turnersoftware will not be able to comment or publish posts until their suspension is removed.

Once unsuspended, turnersoftware will be able to comment and publish posts again.

Once unpublished, all posts by turnersoftware will become hidden and only accessible to themselves.

If turnersoftware is not suspended, they can still re-publish their posts from their dashboard.

Thanks for keeping DEV Community safe. Here is what you can do to flag turnersoftware:

Unflagging turnersoftware will restore default visibility to their posts.