While writing a different post, I had a thought about point 8 of the Semantic Versioning (SemVer) specification.

8. Major version X (X.y.z | X > 0) MUST be incremented if any backwards incompatible changes are introduced to the public API. It MAY include minor and patch level changes. Patch and minor version MUST be reset to 0 when major version is incremented.

Consider the following for an example of a behavioural code change:

Contractually, the code is the same as it is still called encodeText, still takes one argument and still returns a string. Its behaviour on the other hand isn't as now additional text is encoded too.

Let's take it one step further, what about bug fixes?

For a bug fix, you are changing one set of behaviours for another (unintended behaviour to intended behaviour). The original bug may never have been intended but given it is now in the wild, it might now be depended to act that way. 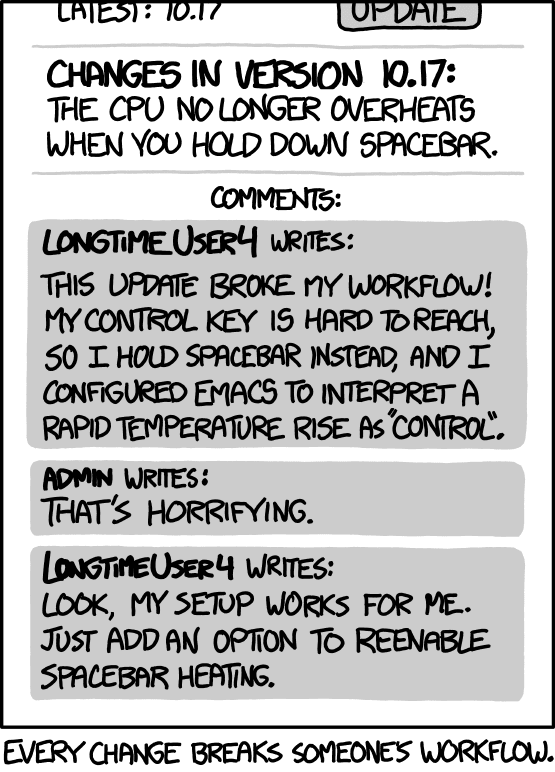 You might be thinking that is a little extreme and I agree. If bug fixes were considered breaking changes because they are a behavioural change, there would be a lot more major versions for libraries.

PHP. is it so bad? 2022 check and comparison with other languages

What I really do as a full-stack developer

Do you have a favorite keyboard ? [I bought the new pop keys KB from Logitech]

Are cover letters worth the time?

Once suspended, turnerj will not be able to comment or publish posts until their suspension is removed.

Once unsuspended, turnerj will be able to comment and publish posts again.

Once unpublished, all posts by turnerj will become hidden and only accessible to themselves.

If turnerj is not suspended, they can still re-publish their posts from their dashboard.

Thanks for keeping DEV Community safe. Here is what you can do to flag turnerj:

Unflagging turnerj will restore default visibility to their posts.