Check out the working game -> https://tetris.trungk18.com

The game has sounds, wear your 🎧 or turn on your 🔊 for a better experience.

Please tweet and tag me @tuantrungvo for any issues that you are currently facing!
Thanks for your understanding. Stay tuned!

Thanks a bunch for stopping by and supporting me!

Tetris was the first game that my dad bought for me and It cost about 1$ US at that time. It didn't sound a lot today. But 20 years ago, 1$ can feed my family for at least a few days. Put it that way, with 1\$ you can buy two dozens eggs.
This is the only gaming "machine" that I ever had until my first computer arrived. I have never had a SNES or PS1 at home.

My Tetris was exactly in the same yellow color and it was so big, running on 2 AA battery. It is how it looks. 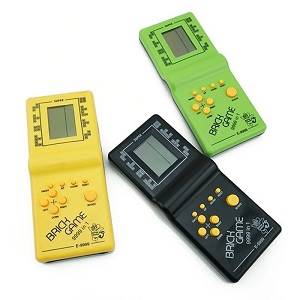 After showing my wife the Tetris game built with Vue. She asked me why I didn't build the same Tetris with Angular? And here you go.

The game can hold up to a maximum score of 999999 (one million minus one 😂) and I have never reached that very end.

I built this game dedicated to:

I built it barely with Angular and Akita, no additional UI framework/library was required.

I got the inspiration from the same but different Tetris game built with Vue. To not reinvented the wheel, I started to look at Vue code and thought it would be very identical to Angular. But later one, I realized a few catches:

It is the most important part of the game. As I am following the Vue source code, It is getting harder to understand what was the developer's intention. The Vue version inspired me but I think I have to write the core Tetris differently.

Take a look at the two blocks of code below which do the same rendering piece on the screen and you will understand what I am talking about. The left side was rewritten with Angular and TypeScript and the right side was the JS version. 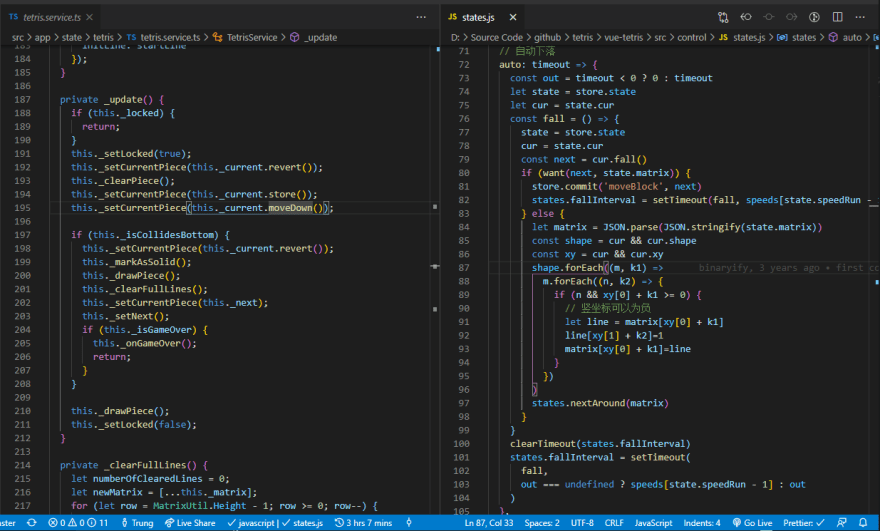 I always think that your code must be written as you talk to people, without explaining a word. Otherwise, when someone comes in and reads your code and maintains it, they will be struggling.

“ Code is like humor. When you have to explain it, it’s bad.” – Cory House

And let me emphasize it again, I didn't write the brain of the game from scratch. I adapted the well-written source by @chrum/ngx-tetris for Tetris core. I did refactor some parts to support Akita and wrote some new functionality as well.

Although you don't dispatch any action, Akita will still do it undo the hood as the Update action. And you still can see the data with Redux DevTools. Remember to put that option into your AppModule

I turn it on all the time on tetris.trungk18.com, you can open the DevTools and start seeing the data flow.

Note: opening the DevTools could reduce the performance of the game significantly. I recommended you turn it off when you want to archive a high score 🤓

I defined a base Piece class for a piece. And for each type of piece, it will extend from the same base class to inherit the same capability

For example, I have a piece L. I create a new class name PieceL. I will contain the shape of L in four different rotation so that I don't have to mess up with the math to do minus plus on the XY axis. And I think defining in that way makes the code self-express better. If you see 1, it means on the matrix it will be filled, 0 mean empty tile.

If my team member needs to maintain the code, I hope he will understand what I was trying to write immediately. Or maybe not 🤣

One import property of the Piece is the next property to display the piece shape on the decoration box for the upcoming piece.

Now is the interesting part, you create a custom piece by yourself. Simply create a new class that extends from Piece with different rotations.

For instance, I will define a new piece call F with class name PieceF. That is how it should look like.

And the last step, go to PieceFactory to add the new PieceF into the available pieces.

And you're all set, this is the result. See how easy it is to understand the code and add a custom piece that you like.

The source code for that custom piece F, you can see at feature/pieceF branch.

I rewrote the animation with RxJS. See the comparison below for the simple dinosaurs running animation at the beginning of the game.

You could do a lot of stuff if you know RxJS well enough :) I think I need to strengthen my RxJS knowledge soon enough as well. Super powerful. 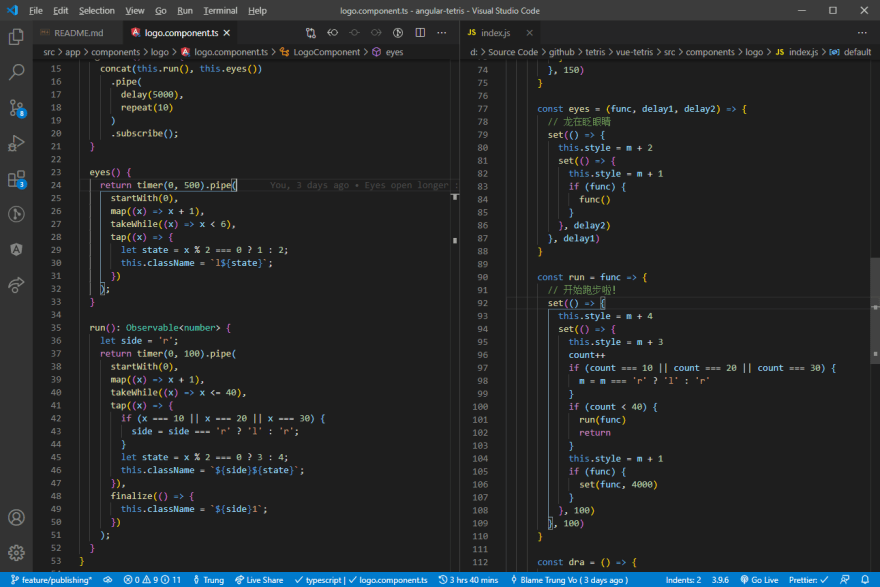 The actual result doesn't look very identical but it is good enough in my standard.

There are many sound effects in the game such as when you press space, or left, right. In reality, all of the sounds were a reference to a single file assets/tetris-sound.mp3.

I don't have much experience working with audio before but the Web Audio API looks very promising. You could do more with it.

I planned to use @ngneat/hotkeys but I decided to use @HostListener instead. A simple implementation could look like:

I was still working with Chau Tran on phase two of Angular Jira clone when I saw that Tetris game built with Vue. My wife wanted to have a version that I built so that I decided to finish the Angular Tetris first before completing Jira clone phase two.

According to waka time report, I have spent about 30 hours working on this project. Which is equal to run a marathon five times at my current speed 😩 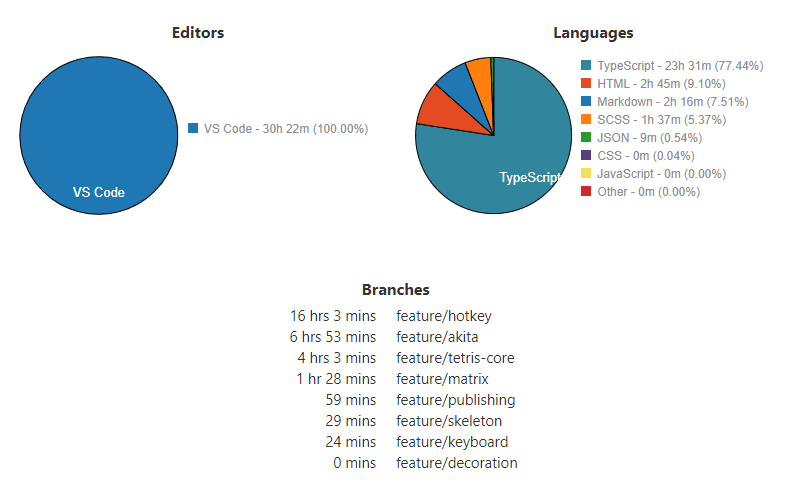 The flow was easy. I designed a simple to do list, then start reading the code in Vue. And start working on the Angular at the same time. Halfway, I start to read @chrum/ngx-tetris instead of the Vue source. And keep building until I have the final result. 30 hours was a good number. It would take me longer, or lesser. But I enjoyed the experience working on the first-ever game I have built.

If you have any ideas, just open an issue and tell me what you think.

If you'd like to contribute, please fork the repository and make changes as you'd like. Pull requests are warmly welcome.

Feel free to use my code on your project. It would be great if you put a reference to this repository.