Previous eras of software consumption were defined by their bundles. Our current era is defined by its diverse application ecosystem, its unbundling. Even recently, corporate consumers wore their fealty to a vendor with pride: we’re a Microsoft shop, we’re an Oracle shop, we’re an IBM shop. While devoted, the relationship wasn’t monogamous. The right tool for the job, but guided by relationship as the north star. Bundling had the benefit (at least perceived) of interoperability — many tools, intermeshed, helping us work well as a team.

SaaS changed both the economics of software, and the adhesion of the bundle. Even if you wanted to be a mono-shop, it’s harder to see how to do that (or why you’d want to). Teams are picking the tools they want. Applications are able to be deeper and narrower than ever before. Consequently everyone has many more applications from a much more distributed collection of vendors.

Established and new companies are repositioning for this distributed, diverse unbundleverse. We started Transposit to help build the apps composed of the APIs from unbundled software. We’re betting on this trend. But I heard a new vision for this modern era of software a couple of weeks ago at Slack’s Frontiers conference: that there can be hubs even amid unbundling, centers in an era of decentralization. Rather than grouping like-applications, these hubs group like-activities. In an unbundled world, the monopolies will be horizontal, aggregating similar kinds of interactions across applications.

At the conference, Slack laid out a significant and compelling vision about becoming a major epicenter amid this sectoral unbundling. While the conference felt bold and enlightening, Slack’s summary blog post was more pedestrian: mostly new features and non-specific enthusiasm. It listed shared channels, Workflow Builder, and Gmail/Outlook gateways as some big pieces. Under the heading “Building the tools for modern work”, the video featuring CPO, Tamar Yehoshua, touches on a common theme of the conference:

“But communication at work doesn’t just happen between people. We need access to data and other workflows. A typical enterprise uses more than 1000 cloud applications. These software tools fragment attention and make it harder for information to flow across an organization. So we want to do more and more to connect Slack to the critical tools behind every business.”

To anyone at Frontiers, the number 1071 will feel at least familiarly significant. I counted it in no fewer than 6 different talks by various members of the Slack ensemble. It’s the average number of cloud applications in an enterprise. (Apparently from this Netskope report.) This was the strong theme of the conference: companies have tons of SaaS applications and Slack is the hub for collaboration, approvals, workflows, etc.

Not sure which session; could have been any of them.

As an aside, Slack’s famously humble, empathetic culture was also on display. The second most common theme was speakers thanking the audience for laughing — just take your yuks and move on folks! (And we have the perfect hype man!) 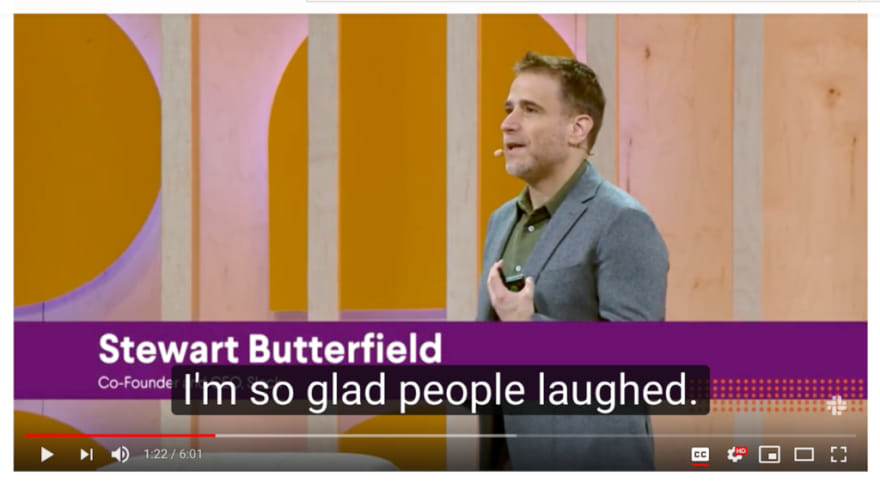 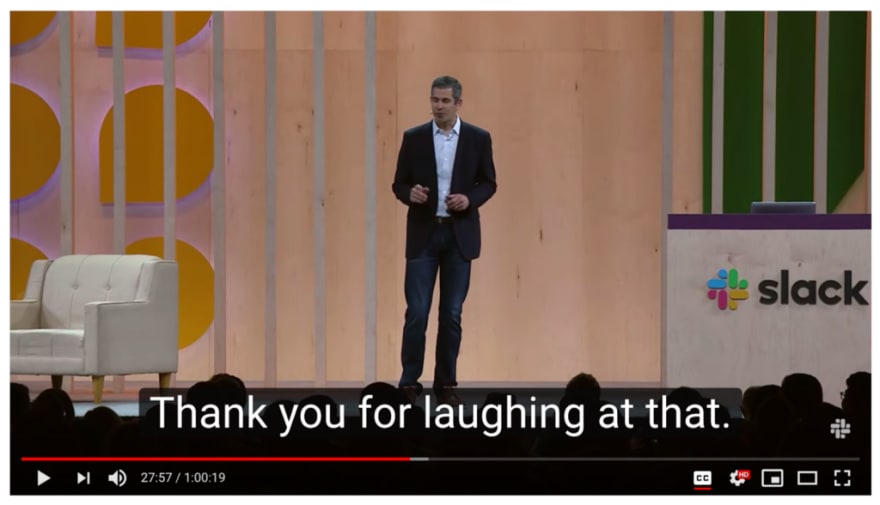 Apps form silos. Silos impede cross-team communication and collaboration. If a task needs approvals from a bunch of folks in a bunch of tools, it’s going to be faster if it happens in Slack. If people use tools infrequently, offer common tasks through Slack. And rather than gathering data from multiple apps, bring it all together in the tool everyone’s already got open, Slack. It’s the aspiring epicenter of work.

Hub at the center of the unbundleverse

SaaS has fractured the traditional bundles. The new monopoly opportunity is horizontal. Rather than taking over collections of applications, these hubs will own common tasks across the landscape of apps. Slack wants to own collaboration and lightweight interactions across apps. It’s a monopoly that embraces a sprawling ecosystem rather than trying to own it. These catalyze expansion and heterogeneity where bundles sought to contain it. Every major software vendor is looking for their hub opportunity.

How will Slack become this hub? How will anyone? In their S-1 (published the day after Frontiers), Slack cited several components of their growth strategy. The first 6 are different aspects of sales and marketing. The 7th addresses their platform vision (and could be copied almost verbatim from other aspiring hubs):

We will continue investing to expand the number of developers building applications that integrate with Slack and to make Slack work with an increasing number of third-party and internally developed custom applications.

(The 8th and final growth strategy is “Leverage artificial intelligence, machine learning and advanced search”, a shibboleth of our times I suppose.)

For any hub, there’s the core platform, the surround of apps and APIs, and a yawning gap in between. Platforms and users alike are dependent on developers to fill that divide, to write the software that wires together hub and edge. From Zapier, to Airtable, and Transposit, that’s why we’re here. As much as the hubs will define our future so will the developers, tools, and platforms that bind it all together.

Building Slack bots or other connections between hub and edge? Try Transposit.

Zero-ops platform that brings the power of a relational database to the ecosystem of APIs.

Boost your presentations with GIFs

Transposit
Zero-ops platform that brings the power of a relational database to the ecosystem of APIs.
Google Hire Has An API. Finally.
#slack #api #integration
Hypebot is the hype man who never lets me down
#slackbot #slack #emoji #api
The Life Changing Magic of Migrating Github repositories with Transposit
#softwaredevelopment #github #sql #api