Note: Please don't use this module for productive projects just yet

With that out of the way:

The idea to this module came to me when developing my solution for the AppWrite hackathon. I had to handle a lot of refresh-calls just to keep my local and remote state in sync. So I placed the question:

Can I securely keep my local app state in sync with a remote server without executing quite a lot of GET - requests?

Which loosely translates to the project order:

Zero-dependency, lightweight caching module for Node.js and the browser

Zero-dependency, lightweight caching module for Node.js and the browser - built with Typescript

Qache at its core is a simple key-value store. Its USP lies in the ability to keep collections of items in sync with single entries. The feature was heavily inspired by Apollo's caching system. I also added a validation system to prevent faulty values from sneaking in. 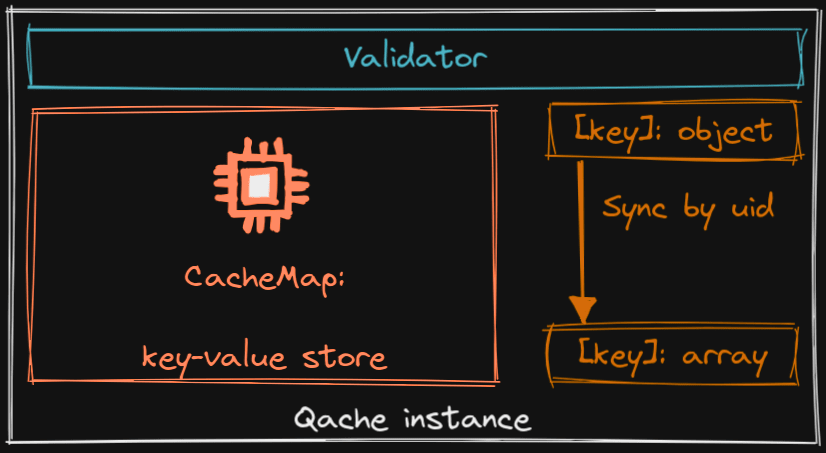 I built Qache as a secure and lightweight HTTP cache for my Vue apps. It can also be used on the…

To elaborate a bit further:

As a small extra, Qache comes with a built-in validator + type checking:

The validation approach is not very sophisticated (yet). In the coming weeks, I'll spend some time to research and implement a more efficient algorithm.

Surely, it's not a module that world's been waiting for, but I've learned quite a lot along the way:

I'd be happy if the one or another person found this module useful. I also appreciate suggestions, feedback and ideas on how I can make Qache better :-) Check out the repos or give the module a shot. I'll add further descriptions in the upcoming days.

tq-bit
Tobias is a selftaught web developer who loves reading, coding and cooking. On sunny days, he can be found hiking through the Teutoburg Forest, on rainy days he preferes a good fiction novel
Getting started with Rust as a web developer
#rust #javascript #todayilearned #programming
An Introduction to Vue 3 and Typescript: Functional components, attributes, and slots
#vue #typescript
An Introduction to Vue 3 and Typescript: Component properties and events
#vue #typescript

Once suspended, tqbit will not be able to comment or publish posts until their suspension is removed.

Once unsuspended, tqbit will be able to comment and publish posts again.

Once unpublished, all posts by tqbit will become hidden and only accessible to themselves.

If tqbit is not suspended, they can still re-publish their posts from their dashboard.