Like many millenials, I grew playing/watching/collecting Pokémon. Back then, there were only 151, but that was still enough variety to make naming all of them quite difficult - even if you were fan. For parents and the uninterested, the names were quite difficult to keep in one's head. Now there's almost 1000 and some of them are quite strange. Looking at you "klink, klang, and klinklang". 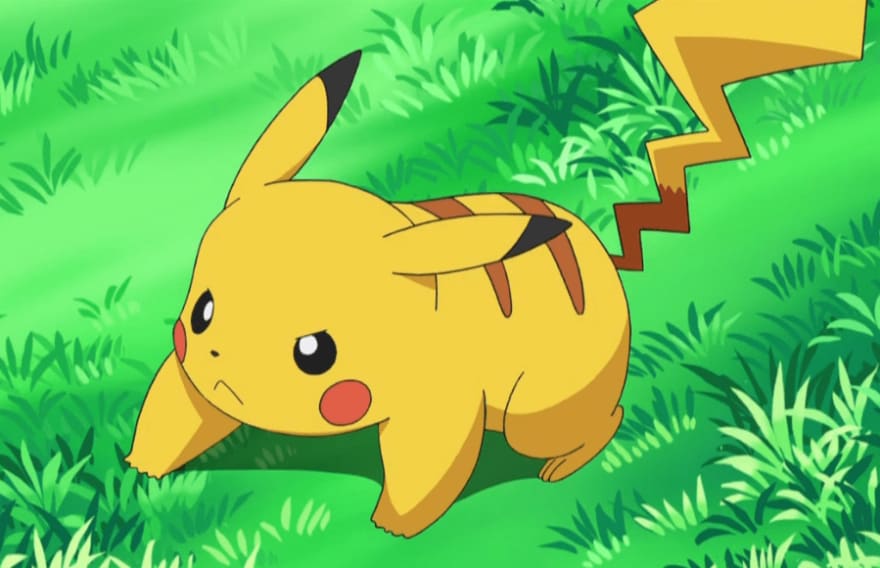 With so many Pokémon now, I thought it would be fun to see if I could generate names that sounded like real Pokémon using ruby.

The problem was that this naïve algorithm doesn't take into account letter to letter changes. The letters lbph can't all appear next to each other.

That sounds like what a Markov Chain is for!

I'm not an AI or language processing expert, but I vaguely remember covering Markov Chains at uni. Their main use is predication. For instance, predicting which word you mean, given the first few letters you've typed.

I wasn't trying to predict which name the user was typing as they were typing it - I was trying to create new names. So I had to use the concepts of a Markov Chain a little loosely.

At the core of Markov Chains is the endcoding of all the valid ways to get from one letter (or phoneme or word or w/e) to the next, including which letters can start the name and which names can end it. That's exactly what was missing from the naïve algorithm.

So instead of simply gathering stats on length and letter frequency, I built up map of valid letter transitions and their relative frequencies. From this map all I had to do was choose a random letter to start, and then random subsequent letters until the name ended when it selected nil.

I allowed letters to be included in the value array multiple times so that when I choose a letter from the value array with .sample it was weighted to the frequency of that pair in the corpus. That way more common pairs would be chosen more often.

This produced better names, but some of them only had one letter in them. How is that valid?

The problem was that nil->s was valid, and so was s->nil. So, the algorithm could choose nil->s->nil - it thinks s is a perfectly valid name!

In this version markov_statistics contains a map where the keys are a list of letters that form some context and the values are the possible next letters e.g. [b, u, l]->[b, g, ...] where bul can be followed by b or g etc.

After this, and after playing around with a sensible value for the length of the context, I got some better sounding names.

As the size of the context increased, it produced actual Pokémon names with greater and greater frequency. Above 5 all the names produced were actual Pokémon, in machine learning this is called over-training.

With testing real AI/ML applications, the system is given half of the training or classification data, and the other half is used to test the classification/prediction accuracy. I could do that with my generator.

If I gave the generator half the available Pokémon names, could it generate the other half?

Well, the answer was no. It produced roughly 3 of the test data names for every 5000 names produced. As a classification/prediction engine that would be pretty poor performance. But for a fake name generator, that's not bad.
It actually produces names like "chespin" and "porygon" without ever even seeing them before. I call that a win.

Is it a Pokémon?

Can it trick a person? That was the whole point of this after all. To answer that question, I built a quiz app to do just that.

I produced 10,000 names from the generator. This includes some real and some not real names. The app randomly picks one and which you think it is.

Another extension I wanted to try was to consider phonemes as the base unit of the names, rather than just letters. For this I needed to collect a list of phonemes in the English languge and then break the names into groups of letters based on those phonemes.

The resulting hash had entries that looked like this.

The hope I had with this extension was to be able to treat certain groups of letters that make a sound (like "ch") as if it was a single letter in the Markov Chain. I hoped this, in turn, would restrict the possibilities for each phoneme, creating more realistic suggestions.

It didn't really make too much of a difference, though.

You can find the code, both for the name generator and the quiz on Github.

dev.to codes! Collaborative coding experiment: The most liked comment picks the next line of code, day 2

I updated my Portfolio (based on Feedback)

Once suspended, tonyrowan will not be able to comment or publish posts until their suspension is removed.

Once unsuspended, tonyrowan will be able to comment and publish posts again.

Once unpublished, all posts by tonyrowan will become hidden and only accessible to themselves.

If tonyrowan is not suspended, they can still re-publish their posts from their dashboard.

Once unpublished, this post will become invisible to the public and only accessible to Tony Rowan.

Thanks for keeping DEV Community 👩‍💻👨‍💻 safe. Here is what you can do to flag tonyrowan:

Unflagging tonyrowan will restore default visibility to their posts.