Redis is a key-value pair database that is extremely fast when compared to other traditional SQL databases such as PostgresSQl, MySQL or CockroachDB. This is as a result of its in-memory storage capacity. It is way ahead in the NoSQL sphere. It is a household name when it concerns database due to its flexibility and ease of use.

Redis can be applied to different scenarios, for instance:

Developers love Redis because is lightweight and open source with a very vibrant community. It supports most of the popular programming languages which include Python, JavaScript, Go, Java, PHP and many others. You can store and retreive data with a few lines of code and it has a lot of data structure for manipulating data. The most exciting feature of Redis is its in-memory store which reduces latency to milliseconds and reduce response time.

Redis works well on Linux, Windows and Mac OS but it works efficiently well with Linux base OS.

RedisInsight is the Desktop GUI client that connects to your Redis Server to provide an interface for visualizing your Redis databases. The client enables you to use the RedisInsight GUI locally.

Before installing Redis using Docker you must have a root user privilege on your Linux operating system and the Docker Engine installed and functioning correctly on your PC.

You can read up on the Redis Stack Server documentation here.

Go to your terminal and install the Redis Stack Server docker image with the command below. I prefer using this stack because I can use it to manage both my local and remote Redis database.

Check if your container is up and running. The command below will list out your docker both running and non-running container.

Your file name should be the same as the one you downloaded.

You can double-click on the file or use this command to start your RedisInsight.

An interface will be displayed that already has your local Redis database instances (if you have one).

To connect to your remote database on Redis Cloud. On the RedisInsight click on the Add Redis Database on the top left side of your screen. A form will display in the right corner for you to enter your Redis Cloud database details. Paste your public endpoint URL on the Host field on the form. It will automatically fill up the forms with your database credentials. 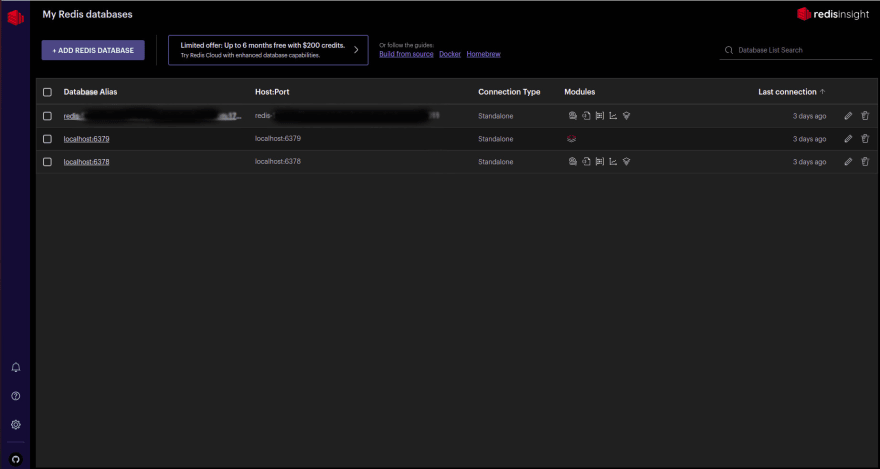 Drop your feedback and questions. I am in the comment section 😉

Once suspended, tochine will not be able to comment or publish posts until their suspension is removed.

Once unsuspended, tochine will be able to comment and publish posts again.

Once unpublished, all posts by tochine will become hidden and only accessible to themselves.

If tochine is not suspended, they can still re-publish their posts from their dashboard.

Once unpublished, this post will become invisible to the public and only accessible to Tochukwu Adams.

Thanks for keeping DEV Community 👩‍💻👨‍💻 safe. Here is what you can do to flag tochine:

Unflagging tochine will restore default visibility to their posts.