Containerization technologies stand upon the shoulders of giants.

Several building blocks are needed to make Docker, Kubernetes and co as powerful as they currently are.

In this series I want to explore each layer of those tools individually.

We will start at the bottom with Container Runtimes and move upwards to higher abstraction layers. 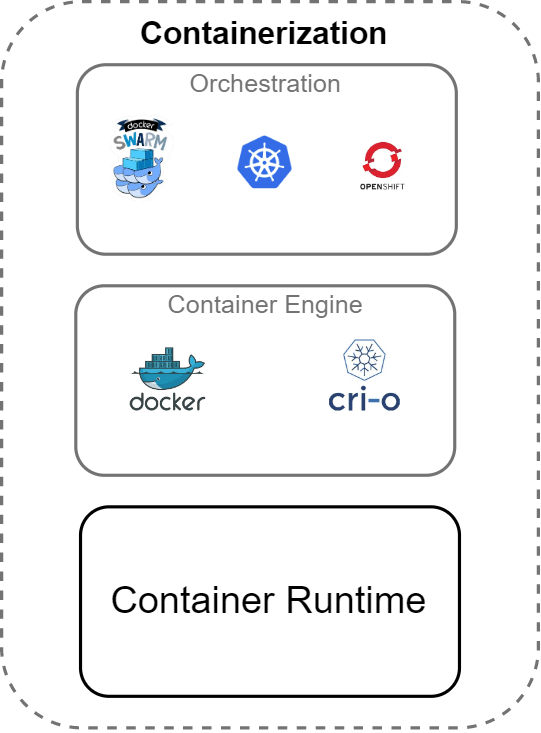 A Container Runtime provides an execution environment for processes in an isolated manner (a container).

The Linux specification for example includes:

Lets have a look at three prominent Container Runtimes:

Is a low level CLI capable of spawning and managing containers compliant with the OCI Runtime Specification.

It is written in Go and a project of the OCI.

Since it takes care of low level interactions it is not recommended to use runc directly.

unless there is some specific use case that prevents the use of tools like Docker or Podman, it is not recommended to use runc directly.

So if you want to build the next Docker, feel free to use it directly :)

runc is currently used by Docker as a default Container Runtime and can be used with Podman & Kubernetes as well.

crun basically solves the same problem as runc: creation and management of the actual container instances.

Of course it also fully implements the OCI Runtime Specification.

crun is written in C and promises a lower memory footprint and better performance. crun is used by default by Podman and can be used with Docker & Kubernetes as well.

gVisor is all about security. It includes a container runtime matching the OCI Runtime specification called runsc.

For improved security, containers created by gVisor are sandboxed which leads to better isolation between your containers and the host system.

Only a limited surface of the host kernel is available for the container and calls to it are intercepted and monitored for suspicious activities.

gVisor is written in Go and maintained by Google.

runsc can be used with Docker & Kubernetes.

In this article we had a look at the most basic building block of any modern Containerization tool. We briefly touched the Container Runtime Specification from the Open Container Initiative and compared three different implementations of the specification.

In the next article we will explore Container Engines!

Once suspended, tobhai will not be able to comment or publish posts until their suspension is removed.

Once unsuspended, tobhai will be able to comment and publish posts again.

Once unpublished, all posts by tobhai will become hidden and only accessible to themselves.

If tobhai is not suspended, they can still re-publish their posts from their dashboard.

Once unpublished, this post will become invisible to the public and only accessible to Tobias Haindl.

Thanks for keeping DEV Community 👩‍💻👨‍💻 safe. Here is what you can do to flag tobhai:

Unflagging tobhai will restore default visibility to their posts.