This week seems to be dedicated to the exploration of wireless technologies. My previous post dedicated to 5G, and this one to mmWave.

Millimetre Waves (mmWave) is a band of frequencies ranging from 30GHz to 300GHz. You would find them sandwiched between the microwave and infrared waves inside the Wave spectrum.

Although it is nothing new but has gained attention worldwide with the introduction of 5G. Before 5G this band of frequencies was limited to, radio astronomy, remote sensing and much more.

Even though these higher frequencies are not strong enough for outdoor broadband applications, they can be propagated over long distances with the use of feasible antennas.

The reason 5G seems more of a leap towards the future is due to the characteristics of mmWave that make high-speed communication possible. Who would have thought, multi-gigabit-per-second capacity over wireless transmission? 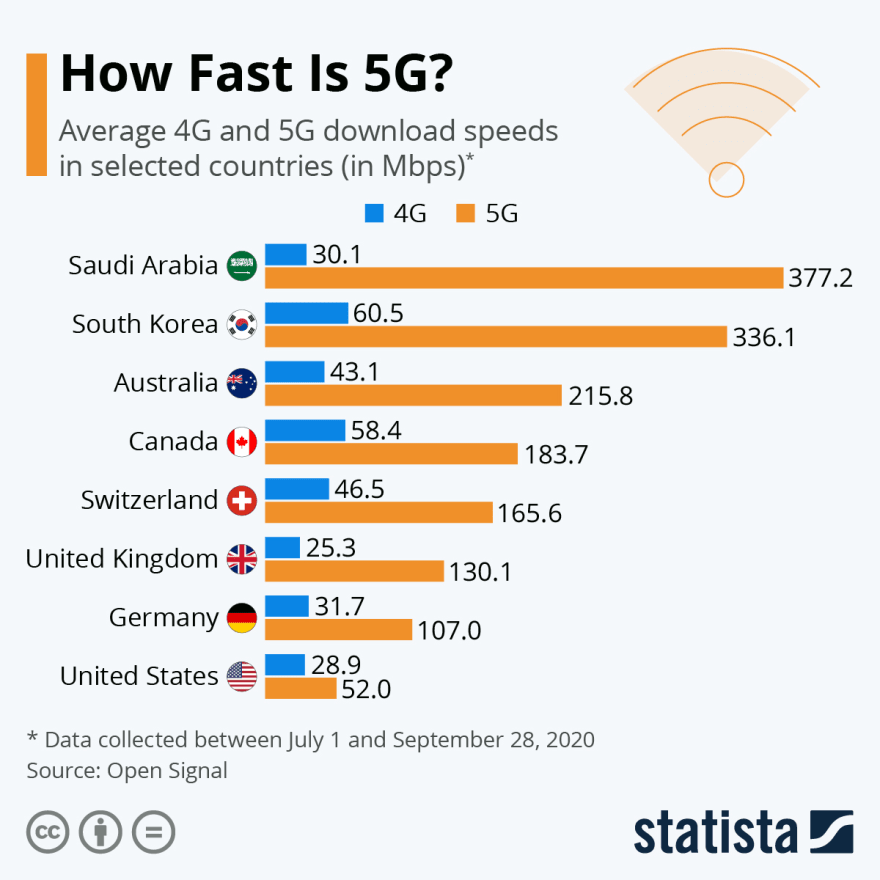 You will find more infographics at Statista

Since security is my primary concern in any new technology I am interested in the question I end up asking was “what set of rules would be needed to transport a message securely over the new and improved internet?”

As we all know end-to-end connectivity over the internet largely relies on transport protocols that operate above the network layer.

The importance of transport protocol can be attributed to the fact that end-to-end performance perceived by the user depends on the interaction between the device and the transport protocol being used. This begs the question does TCPholds its own?

To date, there are only few published results on the performance of popular TCP over 5G mmWave links.

This is due to several reasons. The first is the lack of mobile testbeds that scale beyond a single mmWave link. The second is an analytical channel model that represents the correlation of fading over time in mmWave links has not yet been developed.

The reason why TCP may prove to be insufficient is due to the wide fluctuation of the perceived Signal-to-interference-plus-noise ratio.

As TCP relies on retransmissions mechanisms it does not seem to promptly track the mmWave link state when the channel between the User Equipment and the eNB switches from a line of sight to a not line of sight condition.

In the end, what I believe is creating more intelligent and predictive networking software would only enable mmWave to used to its fullest. TCP may not be the right set of tools to do that

7 Tips on Telling Your Story in an Interview

Color of the Year Idea

TNZ-5
TALAL ..... 🔞 Beginner Programmer 💻, 📚 Booklover, 📃 Blogger*
Supercharge your blogging efforts with a solid system ⚡
#productivity #writing #techtalks #discuss
How to get back after failures in life?
#productivity #career #watercooler
4 Books that are not about computers that made me a good Software Developer
#career #codenewbie #webdev #beginners