In writing our CI setup at Vdoo, we came across some interesting challenges. Having solved them and used the solutions for quite a while, we decided it is best to share, and hopefully save others some time and effort solving similar problems.

Of course, there are alternative solutions to the challenges we have dealt with, and some solutions are probably superior to ours. We are happy to hear about such solutions and to improve our own.

As for the code presented in this post - it was extracted from our CI and cleaned up a bit. As such, it is missing some necessary boilerplate. It will not work as-is, and some work will be required to adapt it to your CI. That said, it should clearly lay out the solutions. (You can think of it as slide-ware.)

All transitions can be bumpy. For us, the transition from storing binary files as regular git blobs to storing them using LFS was one such bumpy transition.

We made sure to include all the LFS-relevant files & patterns in a .gitattributes file, but ensuring everyone (including people who only occasionally work on the relevant repo) properly setup their environments for LFS took some time. In the mean-time, we kept getting files that should be in LFS committed and pushed as regular files in Merge-Requests.

To circumvent that, we set up a simple check at the start of our CI process to ensure all relevant files are indeed stored in LFS.

When people pushed the files the wrong way - the CI would fail with an informative error and instructions.

Every so often a change is made to the code, rendering the code before the change unworkable or irrelevant. This can happen for many reasons. Here are some examples:

Once you introduce such a change to your code, you want people to know about it, and you want to stop wasting cycles on it.

To achieve this goal, we created a required-commit mechanism in our CI. For the CI to work, the required-commit must be an ancestor of the current commit. If it isn't - the CI fails with a descriptive error & instructions for fixing the issue.

Once we have a new required-commit, we inform all developers in a dedicated Slack channel and update the CI to match. This ensures that even if a developer misses the notification on Slack, the CI will let them know what needs to be done.

The solution consists of a simple CI job: 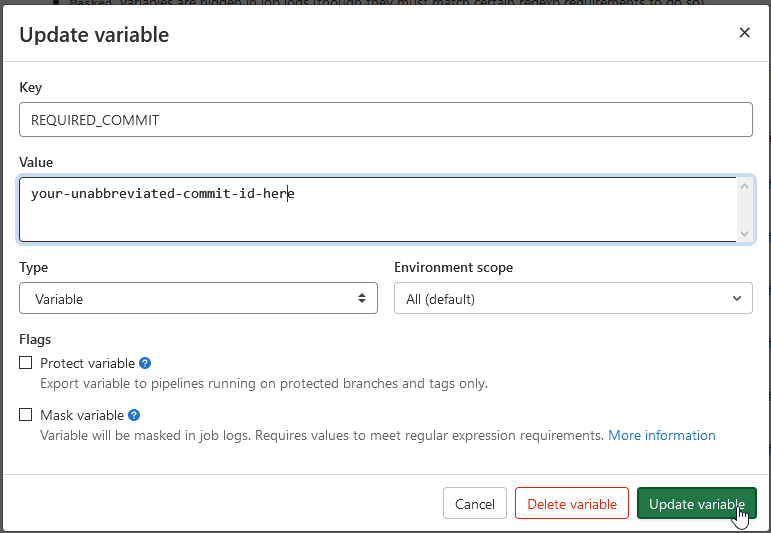 Some of our code is deployed via Docker images. As such - we want our CI to build and test those images. Some tests require running a Docker container and communicating with it, but some tests (especially unit- and integration-tests) are easier to run inside the said containers. To accommodate the latter, we use our Docker images as the base images for the CI test jobs.

This is easy enough to do in the CI. In our case, however, building the Docker images takes a very long time. In trying to reduce this time, we split our build into two parts. The first - a long compilation phase, building some rarely-changing code; the second - installation of our fast-changing Python code & all relevant dependencies.

Noticing the split between the fast-changing and rarely-changing parts of our build, we decided to split it in half, only building the first part when there's an actual change to it.

To do that, however, we have to conditionally build the Docker image for the first half, and in the second half use either the preexisting first half or the newly built one.

For our use-case, we used the following setup:

To implement it, we created the following .yml configuration, representing the build-proxy-promote model, and used include:file to bring it into our .gitlab-ci.yml.

Infrastructure as Code (IaC) how it all started - 1. part

Take Your Github Repository To The Next Level 🚀️