In this post, I will show how you can take advantage of a high performance Kafka deployment, the Kafka Connect framework and Solace PubSub+ to build out a scalable websocket distribution backbone for a contrived market data distribution use case.

For the purpose of this article, I'll be focusing on a financial service use case- specifically market data distribution. Typically market data will be streamed over an exchange using a proprietary protocol. For your internal microservices or UIs, you would consume/normalize/and republish over an event broker of your choosing such as Apache Kafka.

Fanning out to thin clients via WebSocket

For a lot of messaging use-cases, one of the end-points you would likely need to stream to is a web browser. Kafka doesn't support the WebSocket protocol that you could use with your HTML5/JS applications. To bridge from Kafka to WebSocket, we will need to introduce two new components:

Filtering messages to a thin-client

A Kafka Topic is a contiguous stream of messages organized via a partition. A sample topic-partition may consist of 1000's of streams streams of data with the following structure on a Topic

However, it's likely that a user would only want to subscribe to a subset of the streams rather than the entire topic/topic partition... usually via an identifer like a ticker symbol.

As such, a finer level of topic filtering will be required which can be accomodated via the subscription semantics of a protocol like MQTT.

For example, a user may only be interested in the AAPL stock, so they can issue a subscription to Solace PubSub+ with the following semantics:
US/NASDAQ/AAPL

Or if they wanted to subscribe to all US stocks, they can issue a subscription with the following semantics:
US/NASDAQ/#
which will deliver all messages from the NASDAQ market to the client.

This finer grained topic filtering is not something that Kafka provides out of the box. Hence the Kafka Connector would have some simple logic to translate the contents of the payload into a topic to be passed onto Solace. A simplistic implementation of this function would be as follows:

In addition, the Solace PubSub+ Broker will guarantee order of the streams to the HTML5 front end in the order it was received from the Kafka cluster without having to create any sorts of topics or partitions.

MarketData distribution usescases typically have high performance requirements. While Apache Kafka has a variety of knobs that you can tune to achieve low latency and high throughput, it usually comes at a cost of an increased probability of message loss.

The folks over at vectorized.io have created a Kafka-compatible message broker called RedPanda from the ground up in C++ which means you can use your existing Kafka apps with it and realize an instantaneous performance improvement.

This also means that it should work with the existing Kafka Ecosystem including the aforementioned Solace PubSub+ Kafka Connector for WebSocket fanout.

Here are the steps you need to take to spin up the entire stack:

You can retrieve the host:port and credentials from the 'Connect' tab of your Solace Cloud Console: 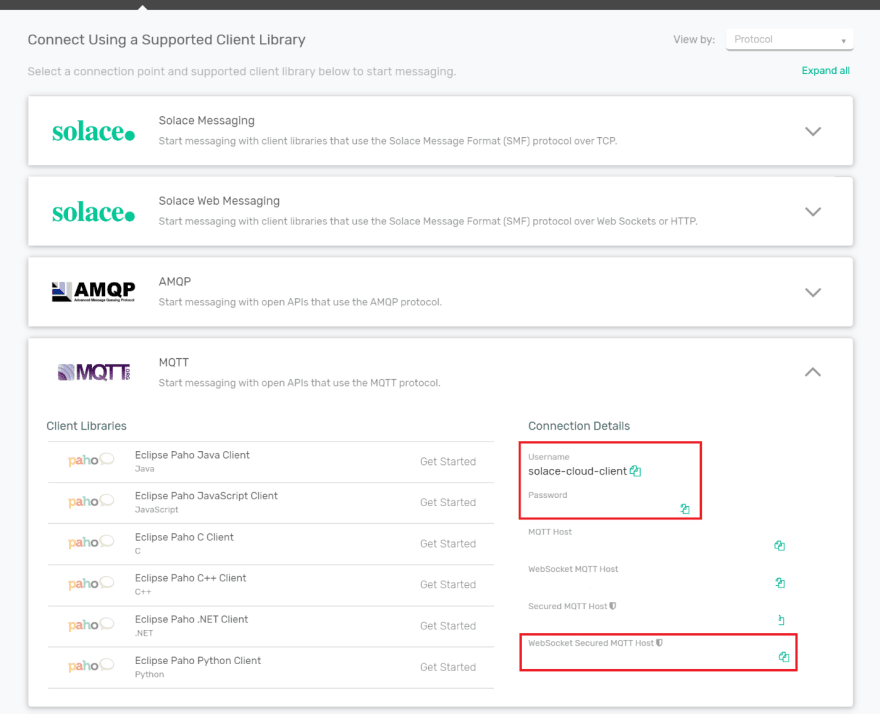 or use ws://localhost:8000 for a broker deployed locally

The Solace PubSub+ Event Brokers allows you to wire together brokers to create a global multi-region (multi-cloud if need be) backbone for your event streams so you are fanning out in geographic proximity to your users. 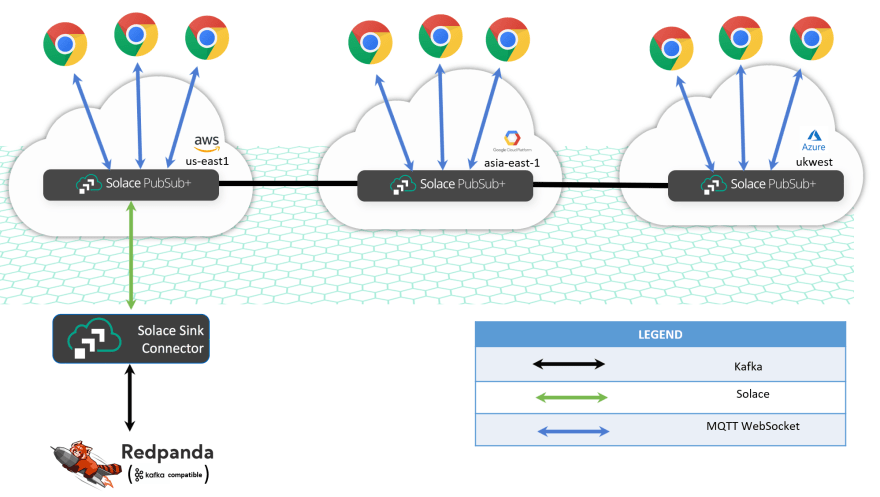 In addition, once your Kafka streams are liberated onto the Solace PubSub+ Event Mesh, it provides additional benefits some of which I listed here:

3 steps to test faster and easier