When I mentioned my recent TDD failure on LinkedIn, it sparked a conversation about TDD vs Unit Tests, in which I made the claim:

The unit of test in TDD is a behavior. That may correspond to a “unit.” It often does not.

Someone in the thread asked me for some examples of what I mean, and here I wnat to provide that.

I imagine most of us are at least conceptually familiar with the test pyramid. 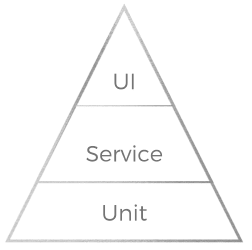 There are many variations, each with its own specific layers, but it’s the concept that matters here.

My point was that when doing TDD, you may write tests that fall anywhere on that pyramid. This often does not correspond to any standard definition of a unit test.

So let’s construct an example.

Imagine we have a web app with a broken login page. If you enter a blank password, the system simply crashes, rather than returning an error.

Aside from legacy, untested systems, there are also times when it’s just easier, or even necessary, to do an integration test as part of your TDD cycle. Particularly if you’re in the process of writing an integration.

As another example, Behavior-Driven Development, a particular interpretation/approach of TDD, often exclusively uses E2E or UI tests. These tests are often coupled with lower-level tests, of course.

So in summary, TDD and “Unit tests” are orthogonal concepts. Many TDD tests happen to be unit tests, but that’s almost incidental, not by design or necessity.

Once suspended, tinydevops will not be able to comment or publish posts until their suspension is removed.

Once unsuspended, tinydevops will be able to comment and publish posts again.

Once unpublished, all posts by tinydevops will become hidden and only accessible to themselves.

If tinydevops is not suspended, they can still re-publish their posts from their dashboard.

Once unpublished, this post will become invisible to the public and only accessible to Jonathan Hall.

Thanks for keeping DEV Community 👩‍💻👨‍💻 safe. Here is what you can do to flag tinydevops:

Unflagging tinydevops will restore default visibility to their posts.