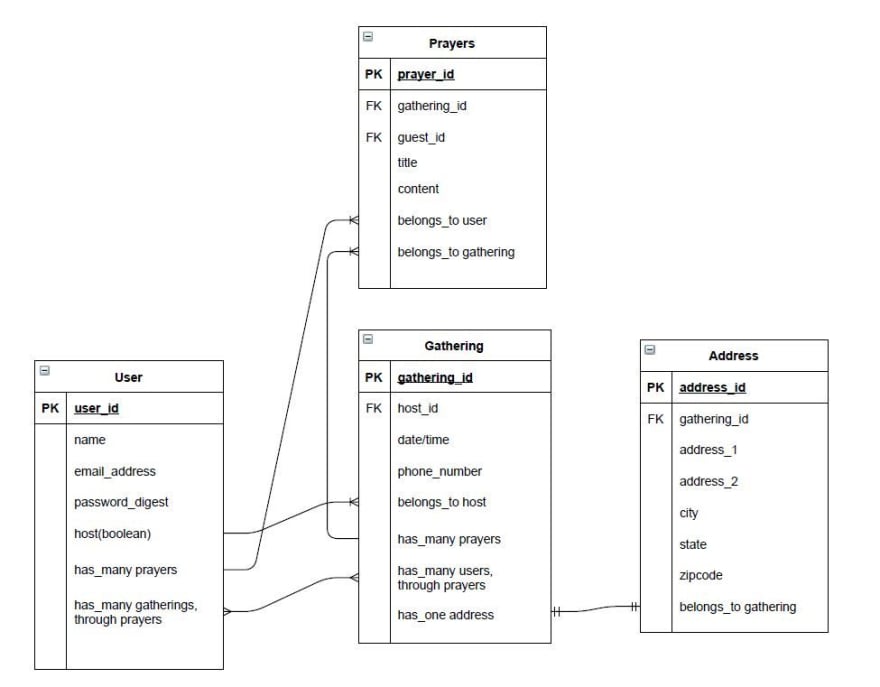 I had 2 areas that were challenging. One was to properly add an address to my gathering form. In this form, I had to create an address object with model. And looking back on it, this was a simple solution for a complex problem. So this is the code that I started with in regard to the address:

And this was my form below:

I originally thought that as long as I can accept everything in the hash called address, rails should generate an object called address; however, I quickly realized that rails did not permit the address field. After googling and playing around with the address object several rounds, I realized that I needed address_attributes instead of just address. Also, because my gathering object only had one address, the build method is different. It should be the following:

After doing this and changing my strong params to the one shown below, I was finally able to move on.

So for my second major issue, it had to do with time validations. I had a datetime object created for the gathering meeting time. At first, my form looked like this:

When I hit the create button, I realized that the datetime created was for UTC time and not the local time. After pulling my hair out, I realized that there was no way around this issue. I had 2 choices. One was to create a meeting time in UTC (which nobody understands other than software engineers), or I had to set a time zone. I realized that resolving this issue would be for my edification, so I decided to painfully add a column to my gatherings table called “timezone” and redo my form to look like this:

Having a time_zone_select would help the user properly identify their timezone and allow me to adjust the timezone offset. My set_in_timezone method looked like this:

There was no problem doing this until I ran into my update action in my controller. Here was the code.

The problem here is that updating and validating happen in the @gathering.update method altogether! I found out that I can use the before_validation method. So in order to do this properly, I needed to reset the proper time before the validation. My code looked like the following:

After finally making that change, I was good to go. Also during validation, I checked to see that the meeting_date created was not in the past.This validation looked like the following:

After all these were implemented, I could finally move on. Happy coding!

Rails 7, Bootstrap 5 and importmaps without nodejs

Once suspended, ting682 will not be able to comment or publish posts until their suspension is removed.

Once unsuspended, ting682 will be able to comment and publish posts again.

Once unpublished, all posts by ting682 will become hidden and only accessible to themselves.

If ting682 is not suspended, they can still re-publish their posts from their dashboard.