If you have ever used a relational database for persisting your data and an object-oriented programming language for your application, then Object-relational mapping paradigm is definitely something you should be familiar with. If not then read on as this article hopes to provide an introduction to the concept of ORM by answering the basic questions like why is there a need for an ORM, what an ORM is, the benefits and drawbacks of ORM, first steps needed to set up an ORM and the patterns of setting it up.

Understanding the need for ORM

Object-oriented programming languages (OOP) are great in combining variables and functions into classes and objects. Imagine this as objects in the real world (cars) each with their properties (wheels) and behaviours (drive). On the other hand, relational databases (also called Relational Database Management System or RDBMS) are powerful in their relationships between individual tables through the use of foreign keys. Imagine this as relations in the real world between one entity (passengers) and another (plane seats) linked together by a unique identifier (plane ticket ID). Today, the majority of applications are written in an OOP language and at the same time persist their data in the relational databases. Consequently, a need for a more harmonic way to communicate between them arose.

The clash between objects and relations is a highly complex problem as these two represent fundamentally different paradigms. The differences vary from the basic data structures, through differences in manipulations and transactions to conceptual differences. A more umbrella term that covers both specific and philosophical contrasts between them is Object-relational impedance mismatch (also Paradigm Mismatch).

It is important to state that the difference between the object-oriented and relational concept is intentional as they are optimised to do what they are best at. The object-oriented programming language is powerful in its ability to describe the real world using objects as the fundamental data type and the four principles of OOP - encapsulation, abstraction, inheritance and polymorphism. On the other hand, relational databases are exceptional in persisting data and thanks to the nature of the relationship between entities (most commonly represented by tables) through primary and foreign keys, they ensure data integrity through referential integrity. They also use Structured Query Language (SQL) designed for fast data retrieving and manipulation. Since both concepts are widely used, especially together, Object Relational Mapping tools can blur the line between the OOP language and RDBMS a little bit and allow your application to make the best of both sides.

Once upon a time, there was Object Relational Mapping (ORM)...

ORM is a concept that lets you manipulate data from a database through an object-oriented paradigm. In other words, it allows you to call and manipulate data from the database using your language of choice instead of SQL. The process of converting data into objects is called hydration and usually involves converting column values into object properties. That is why ORM libraries are language-specific (here is a list of ORM libraries). That is only the basic concept, the ORM libraries are much more powerful, especially when your application and database get more complex. 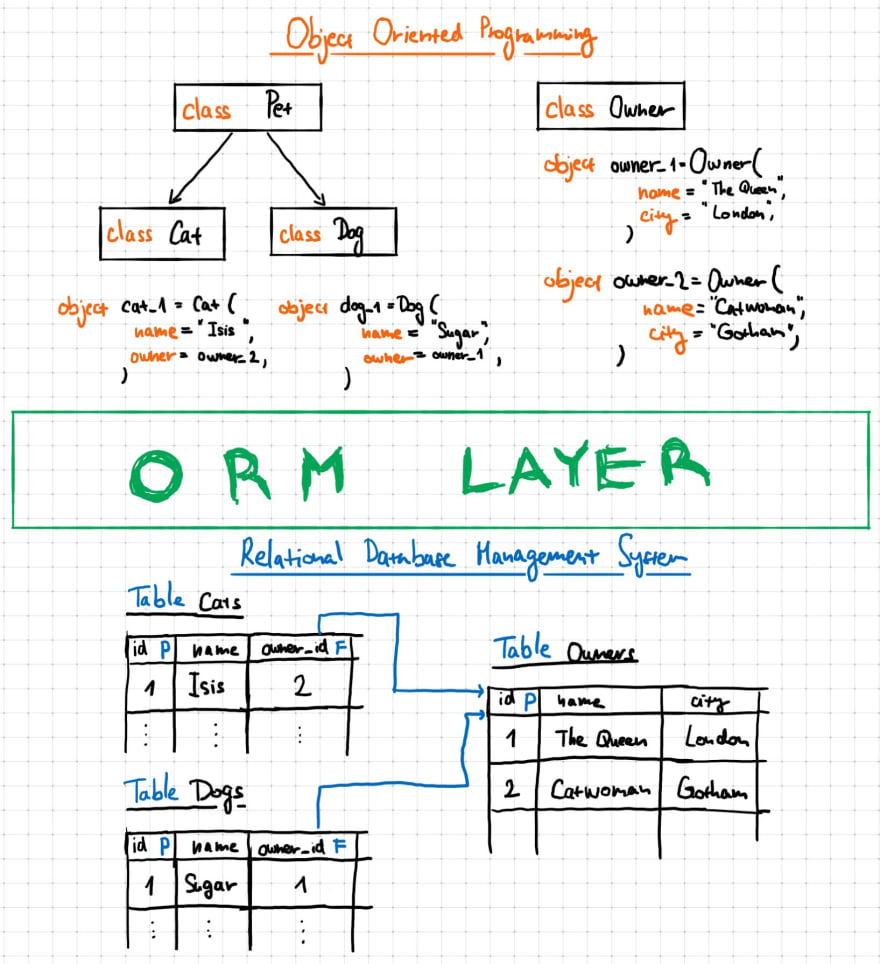 Here are the benefits that ORM can bring...

...and here are some drawbacks

That being said, you do not have to use ORM for the OOP and RDBMS to coexist. There is a heated debate between those for and against ORM (I won’t go into the details here, but here is a cool article looking at the dispute through values or an article on why ORMs are so hated by Martin Fowler). You need to decide for yourself, whether using ORM will improve your application or instead bring unnecessary complexity. One way to avoid the problem altogether is to just use a non-relational database and/or switch to functional programming language...

The ORM Patterns can be viewed as philosophies on how to map data between tables and objects. Think of it as how the ORM layer between the table and objects is behaving.

With Active Record, a table is represented by a class (usually called entities) where properties of the class more or less correspond directly with the columns of the table. Therefore, an object instance is tied to a single row in the table. The biggest difference from the Data Mapper paradigm is that in addition to the data the entities also contain methods that operate on them (save, delete, insert...), allowing for much closer binding between data and objects. The major benefit of an active record is its simplicity and quick set up as what you see in one is likely represented in the other. However, because of the tighter coupling between data and methods, the object contradicts the single responsibility principle (here is a nice summary by Uncle Bob). Moreover, testing these bound objects is difficult and with increasing complexity, changes in one side can have an unwanted impact on the other. That is why Active Record is most suitable for CRUD applications. ORM libraries that support Active Record are Ruby on Rails (Ruby), Laravel’s Eloquent (PHP), Symphony’s Propel (PHP), Django’s ORM (Python).

As for Data Mapper, the set up is similar to the active record, however, the objects do not contain data manipulation methods (we cannot call a save method on the object to persist the data). Instead, the objects access the Data Mapper layer that transfers the information to the persistent database and vice versa (in Java’s Hibernate this is called the Entity Manager). Thanks to this separation, the objects do not need to know how the data are saved into the database and they do not need to inherit the ORM methods thus following the single responsibility principle. Resulting from this detachment is also a much stricter process of interaction with the database which allows for more formal process and stricter control over database access. ORM libraries that support Data Mapper are Hibernate (Java), Doctrine 2 (PHP), SQL Alchemy (Python), Entity Framework (MS .NET), Prisma (Golang).

While Active Record is trying to blur the line between them as much as possible and creates a direct link, the Data Mapper creates a true middle layer that isolates the persistent database from the app’s business logic.

...and the OOP and RDBMS lived happily ever after

At the end of the day, ORM is just a tool. A powerful, magical tool that can bridge the differences between two very different worlds and allow you, the user, to interact with relations as if they were objects in the language of your choice. However, just with any tool, it requires practice and understanding, as relying only on the magic can lead to dangerous performance issues. Whether you decide to implement ORM or not, keep in mind that the decision is entirely up to you, so make sure that you understand what your application needs, especially in the future, to keep OOP, RDBMS and you happy ever after. The end.

Tina
Beginner Python/React Developer, grappling with naming conventions.
SQL & database monthly wrap up - February 2021
#sql #database #bestofdev
The M1 Mac - Is it worth it for devs?
#systems #node #codenewbie #discuss
What was your win this week?
#discuss #weeklyretro