This week, I published Anand Safi's #DevJourney story on my eponym Podcast: Software developer's Journey. Among many other things, here are my main personal takeaways:

Thanks, Anand, for sharing your story with us! 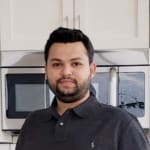 You can find the whole episode and the show notes on devjourney.info or directly here on DEV

Did you listen to his story?

How I Got Selected into Google Summer of Code

The beginning of my open source journey with Outreachy

How to 3D Scan an Object for Synthetic Data