In my previous post I outlined my experiences with Umbraco Cloud. It boils down to the fact that if you are a team of devs and follow a gitflow or similar release management workflow Cloud just isn't an option.

So I was investigating alternatives that allow a release management workflow... but I still want a baseline and auto upgrades.

DevOps is the union of people, process, and products to enable continuous delivery of value to our end users.

Continuous Integration (CI) is the process of automating the build and testing of code every time a team member commits changes to version control.

Continuous Delivery (CD) is the process to build, test, configure and deploy from a build to a production environment.

Of course when developing Umbraco sites you keep your code in sourcecontrol adding CI into the mix we can make sure the code "builds" when new changes are commited.

For simplicity I'll keep everyting in Azure devops. But you can also have this in for example github.

Say I have a Umbraco project with a Core + Web + Test project. 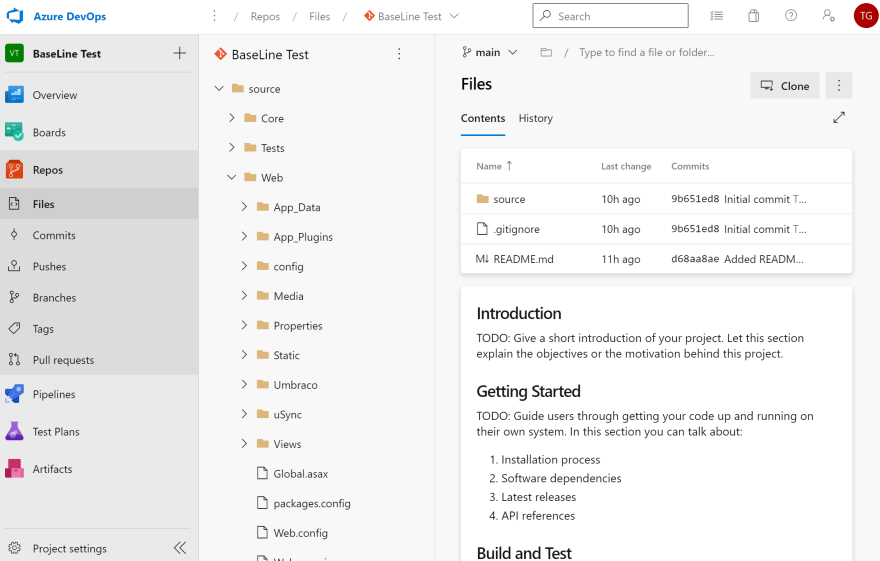 You can then first setup a pipeline that builds and deploys the test version (from the release branch). So new features get developed on feature branches, when they need to go to the client for review you create a pull request or merge the feature branch with release. 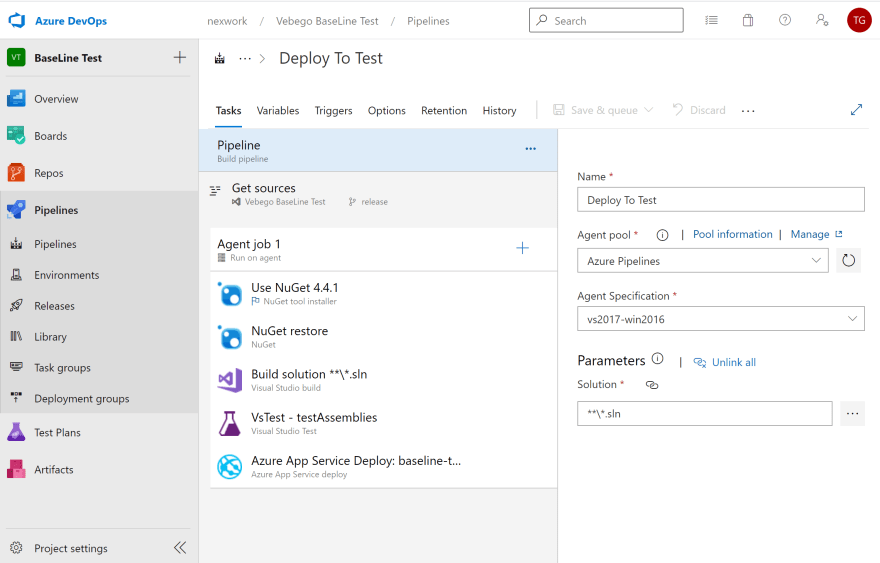 Setting this up is pretty simple..just add a new pipeline (and I tend to pick the classic visual editor) 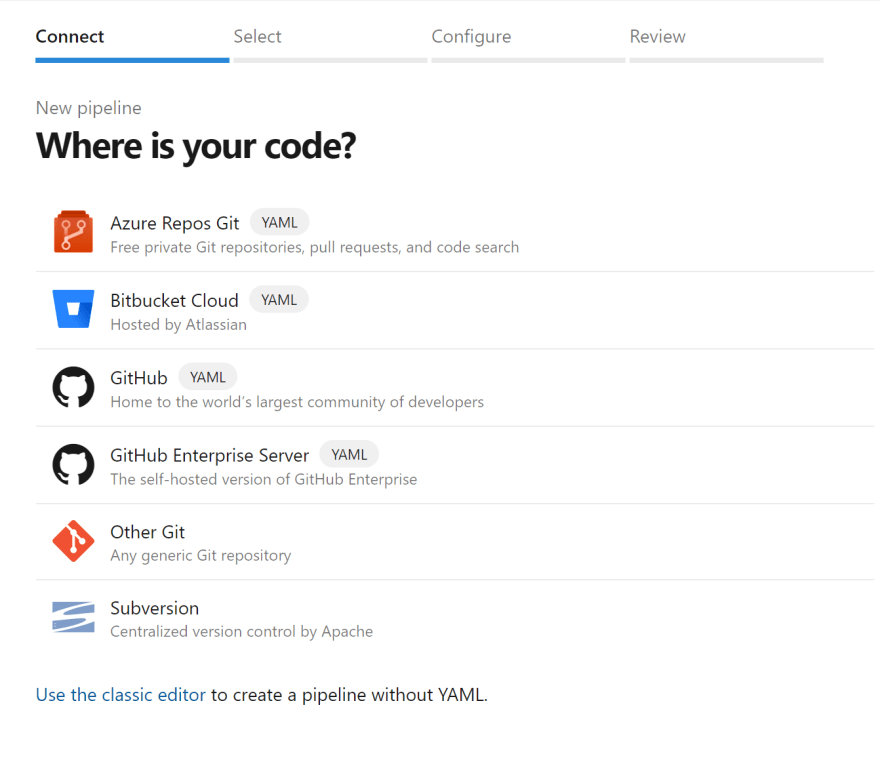 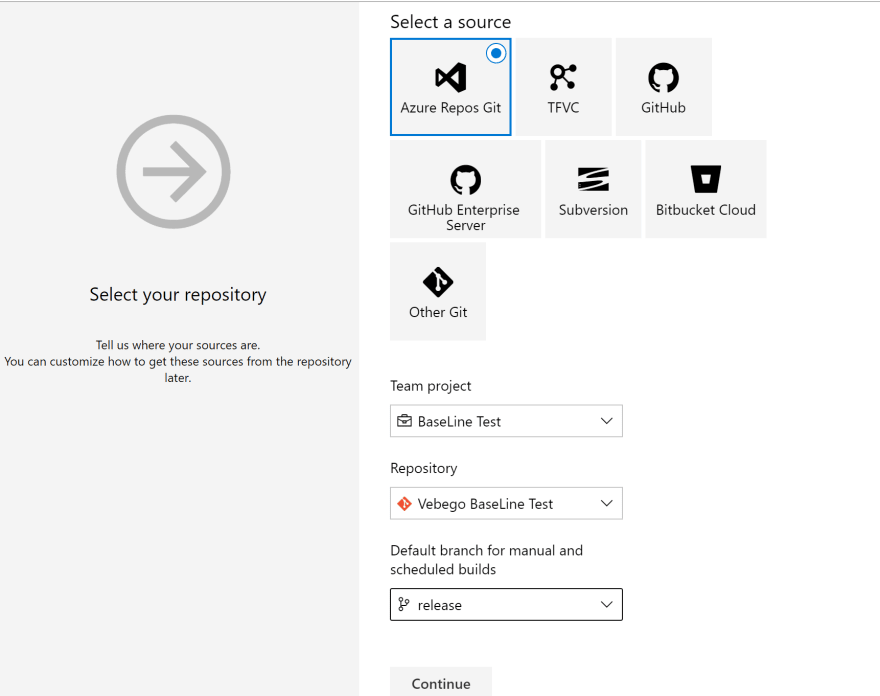 After that you can select a pipeline template (I pick the azure web app for asp.net, since Umbraco is a asp.net web app and I want to deploy to azure).. 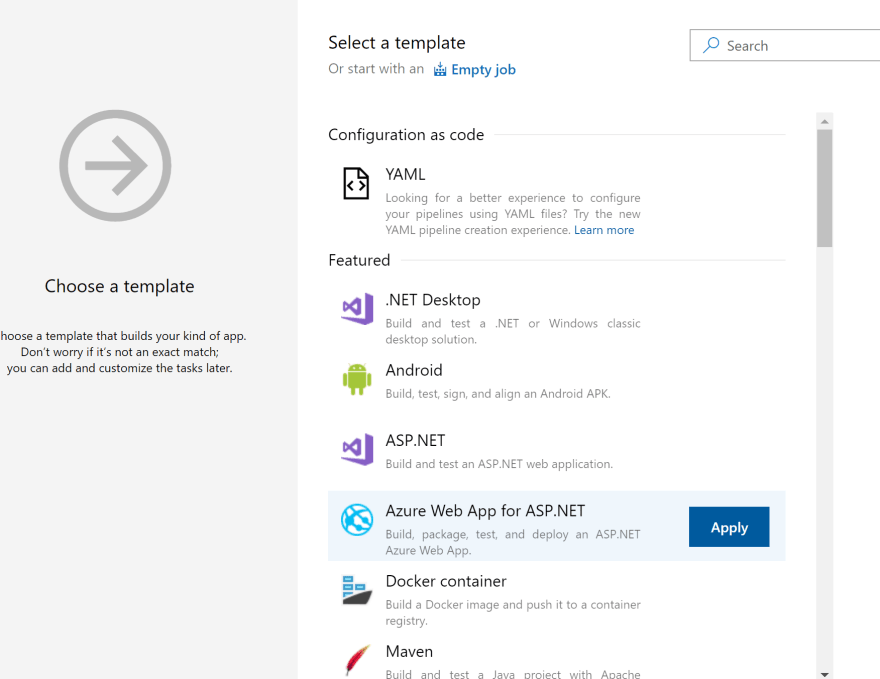 Picking that template most stuff is already in place. 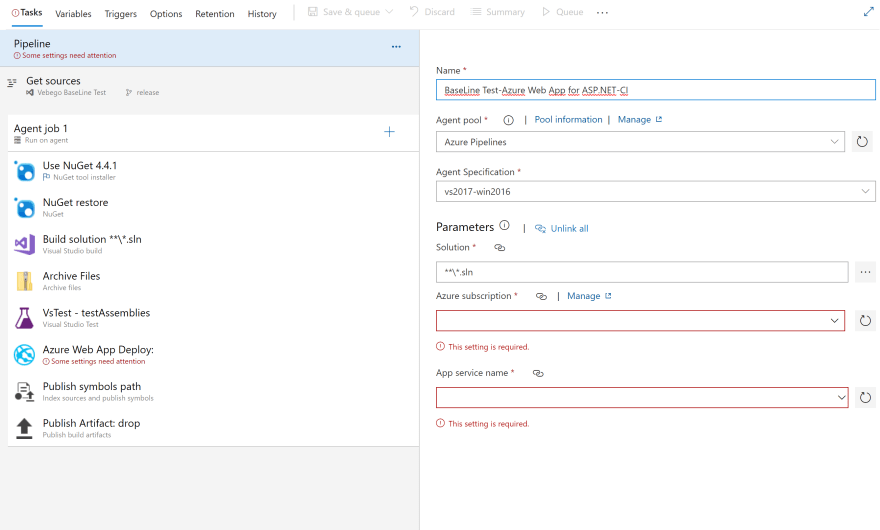 Once all that is selected you now have a working CI, CD process for a test environment. So codes get's pushed to the release branch... that triggers a build and deploy...

One small side note, best is to enable xml transformation on the Azure App Service deploy task, that way you can have *.Release.config file transforms (like for settings that are different between your dev env and the actual test env). Stuff like conn strings can be also set that way but also on devops or in azure... (depending on how you want it configured). Plus of not having it in sourcecontrol is that there is an extra level of security (sensitive settings shouldn't go in source control).

Of course now we have a staging version of the baseline site... but I also want child websites using that base...

So adding a new pipeline that will build an artifact (webdeploy package) from the main branch. Following the same steps as before but removing some tasks and adding 1 new one

This will now run when new code is commited to the main branch... each time a new artifact will be generated. 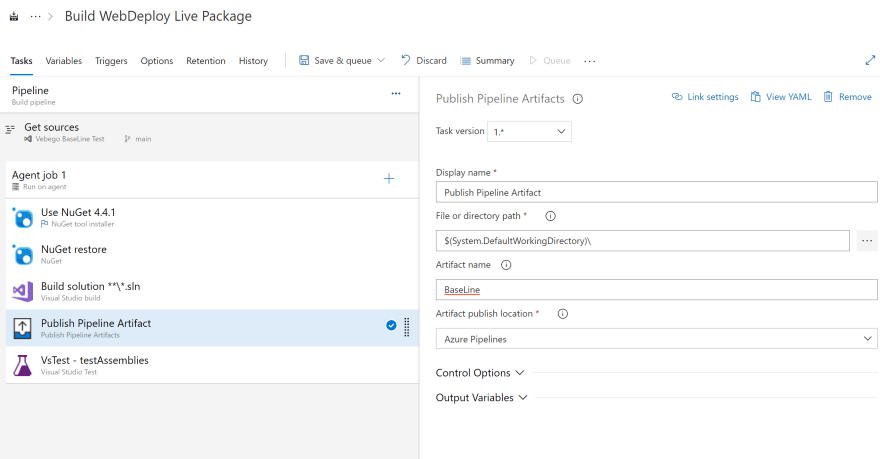 Important here is the Artifact name (we need this name later) and also the File or directory path, for this I used an available variable $(System.DefaultWorkingDirectory)\ (not sure if that is the correct way but it works!)

Next is setting up the release pipeline, so in the releases part of pipelines just add a new one (this should get you started with an artifact and stage) 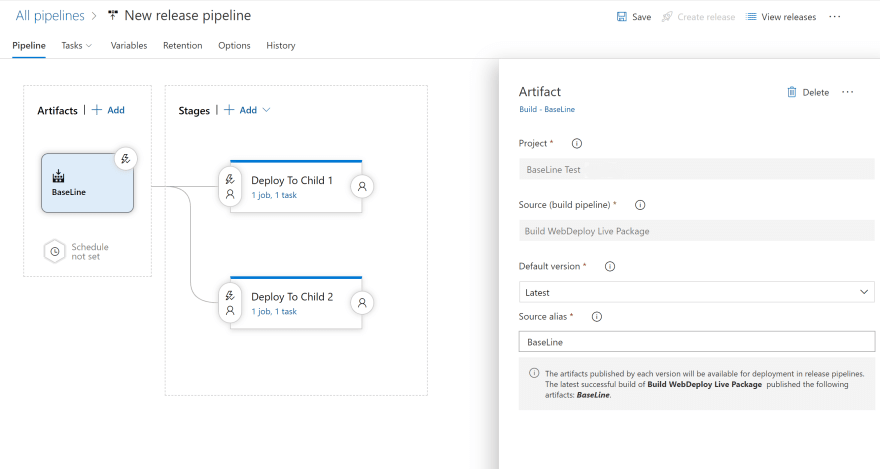 The artifact then points to the latest pipeline (where we create the artifact), we also need to specify the artifact name here. (needs to match with what is on the pipeline)

Finaly a task per child is setup... this just uses a Azure App Service deploy task that points to the correct app service (again you need to have the app service created on your portal)

Again stuff like conn string shoudln't be set in the web.config in source control but you can set these in devops or in the azure portal.

So now when the build of the artifact is finished the deploy will happen to my 2 child sites using the same base...

Of course this outlines the basics... I also have uSync in the mix that handles the version control of a lot of umbraco stuff (like doctypes,datatypes,...) and auto imports these on the child sites...
Then with silent upgrade also a amazing free addon to Umbraco from Kevin Jump added we can first test an upgrade localy and if that succeeds roll it out as part of a release ... just add the nuget package and set (possible with a config transform)

Now I have 1 codebase for all the sites... with a theme picker this could work in having a different look and feel for each child site... so a content defined theme... if you do want a different code base that is also possible. New git repo, add the base as an origin and you can pull/push from the base... of course you then need to setup a new build/release pipeline for that case...

You could also have staging sites for all the child one... just create a release artifact and add a new release pipeline...deploying to staging locations...

Of course blog storage is also possible, again, each child would have it's own config...

Key is to develop with the concept of a base site in mind, so make everything as flexible as possible, might even introduce some interfaces so you can switch different bits depending on config. For example an applicant tracking system, child a might be using umbraco content, child b an external api... making that swappable still allows a single code base...

If you want to fetch content from live to develop/test against you can add uSync complete that contains uSync publisher. Or just download the db and run on that locally...

Unless Umbraco Cloud introduces a significant price drop and would allow for a release management workflow I wouldn't look back twice. Azure Devops is a really mature product that makes the whole continuous Integration/delivery a breeze...

From what I hear other folks are also using Octopus Deploy and Github actions to get a similar workflow.

Once suspended, timgeyssens will not be able to comment or publish posts until their suspension is removed.

Once unsuspended, timgeyssens will be able to comment and publish posts again.

Once unpublished, all posts by timgeyssens will become hidden and only accessible to themselves.

If timgeyssens is not suspended, they can still re-publish their posts from their dashboard.

Once unpublished, this post will become invisible to the public and only accessible to Tim Geyssens.

Thanks for keeping DEV Community 👩‍💻👨‍💻 safe. Here is what you can do to flag timgeyssens:

Unflagging timgeyssens will restore default visibility to their posts.