LuaConsole is a powerful command line application (CLI) for Windows, Linux, and Mac which boasts various amounts of usability through switches and convention conformance over the default PUC-Lua and LuaJIT CLI. All the while it supports all major Lua versions (lua-5.1.x to lua-5.4.x) to be executed from a single binary file! It doesn't stop there, however, as it also supports the major package management repositories such as LuaDIST (deprecated) and LuaRocks! It supports MSVS(MSVC), GNU GCC/MingW64, and llvm (with a little set up).

LuaConsole can be found at the Github Repository. If you are on windows, you can select 'Releases' from the side bar and download a pre-built copy.

LuaConsole is a self-contained package for both Linux and Windows.

The makefile is in place to help developers familiar with the conventions use the scripts inside the repository. If you are unfamiliar with Makefile, follow along to the next Windows or Linux sections.

You will need to migrate the downloaded folder somewhere in your system and set up your environment variables. This is a simple task. LuaConsole is a 64bit application, so it belongs in C:\Program Files.

If you are building from source,

I decided to create a folder called 'LuaConsole'. The full path would be, C:\Program Files\LuaConsole.

Next, you want to set up LuaConsole so that you can just execute the program without specifying the path each time. This is trivial - just edit your environment variables. You can do this through the UI or in a console with setx "path=%path%;C:\Program Files\LuaConsole" 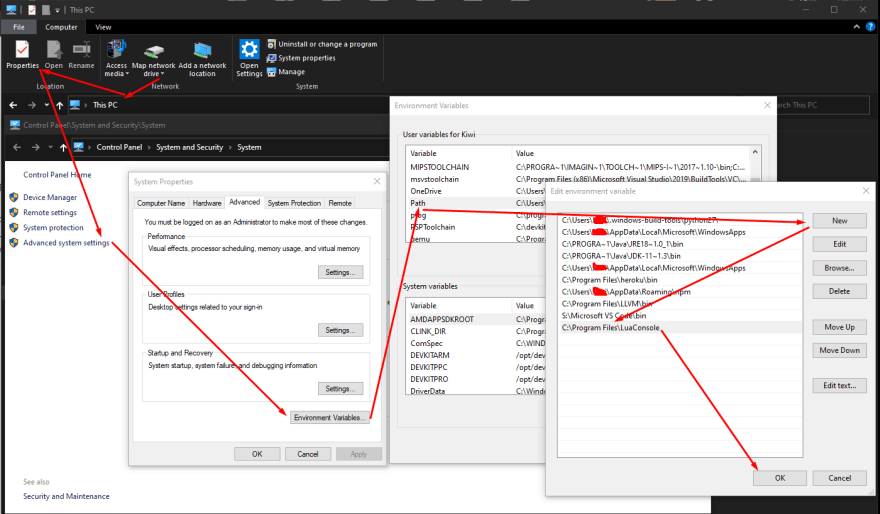 Building in Linux is very straight forward. Simply download the prerequisites, followed by building the driver with a default lua version, and finally building all the lua versions you will use. Don't worry about it too much, as you can add more lua packages later. I prefer to use the bash scripts. To learn more about the scripts, they listen to --help or check out the LuaConsole Wiki.

LuaConsole is a self-contained program unless you add the liblua*.so files into a library path or set up a library path for them. liblclua*.so must stay next to the executable, as they are dynamically loaded. You can configure export LD_LIBRARY_PATH=.:$LD_LIBRARY_PATH for now to test and use it.

Simply launch the program from terminal or console!

Here is a test script in case you came unprepared:

There is also a test program in LuaConsole/res/testing.lua.

These are various ways to launch a .lua file:

LuaConsole has many more features than the default PUC-Lua CLI application. The possibilities are endless! Try luaw --help to learn more! Don't worry too much about how you send arguments in - LuaConsole will accept arguments with / and -.

Start in REPL mode or analyze the environment after a script. REPL stands for Read Execute Print Loop. Perhaps you want to test a single line of code. Perhaps you want to procedurally program something. For those familiar with GNU GDB, Lua doesn't really have something to debug an environment. LuaConsole introduced the ability to use REPL mode and for you to command how you use it! This is achieved with the -p switch. This means you can take a look at global variables, their values, and tons more - straight from a REPL!

Do not print any copyright information. This is good if you want to use Lua to capture output of the scripts - doing math for example. Use the -c switch.

Change Lua versions. Sometimes scripts are only supported in 5.2.x or 5.3.x and above. This is likely due to the developer wanting to use the bits core library. Simply use the -w switch and specify the version you want to use. For luajit, specify luajit. For lua-5.3.5, supply lua-5.3.5. It's that easy!

Create a global variable for your script to use. Sometimes you just want a variable that you can change easily from the CLI. You may want to feed some data into Lua, or you just want a boolean. LuaConsole has your back with the -D switch. Simply use the format, -Dvariable=value. A bonus: it will correctly type your variable's value and it can even span tables!

Supply arguments through the arg variable or tuple ... notation. Perhaps you are making a script to be run like a command line application. You would find yourself using the -n switch in LuaConsole. Be aware that you need to use it at the end, or else you will translate switches as arguments!

Change directories. You just cd'd or pushd'd into a subdirectory to run a script, but you have a lot of relative paths you don't want to change from the root. This is where the -s variable comes in to play. Simply use the format, -s C:\start_dir and you are on your way!

Have fun playing around with LuaConsole! A final footnote, there is a difference between -E and -e and -L and -l. This is in place to determine which script or piece of code runs when. You can make an abomination like this:

And it just works.

CRDTs: A Beginner's overview for building a collaborative app

How to add a condition in SQL with GROUP BY

Cody Tilkins
https://github.com/tilkinsc/LuaConsole LuaConsole Creator and Lifelong Developer. Looking for remote job.
Thank You DEV 😊
#beginners #codenewbie #discuss #showdev
When can you declare yourself a Full-stack Dev?
#discuss
What Makes You Stay In A Community?
#discuss #community #watercooler

Once suspended, tilkinsc will not be able to comment or publish posts until their suspension is removed.

Once unsuspended, tilkinsc will be able to comment and publish posts again.

Once unpublished, all posts by tilkinsc will become hidden and only accessible to themselves.

If tilkinsc is not suspended, they can still re-publish their posts from their dashboard.

Once unpublished, this post will become invisible to the public and only accessible to Cody Tilkins.

Thanks for keeping DEV Community 👩‍💻👨‍💻 safe. Here is what you can do to flag tilkinsc:

Unflagging tilkinsc will restore default visibility to their posts.