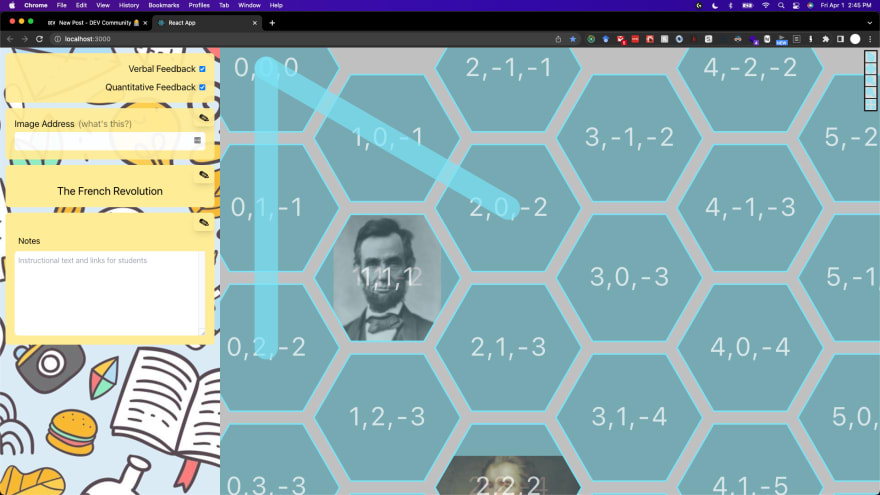 It's been a ride. I remember three weeks ago when I was starry-eyed about incorporating new technologies like NextJS and FaunaDB. What ended up happening is I fell back to technologies that I was familiar with: Django for REST APIs and PostgreSQL. Part of the reason why I wanted to use new technologies was because it was frustrating getting my development environment working with an M1 Mac Air. Fortunately, I figured it out. Building the static UI was a breeze; it only took a day. Making the static UI stateful, well that took the next two weeks. The following is an overview of the major updates I have accomplished so far. The most important update being how I approach my work now.

The UI was built using Tailwind CSS in a create-react-app TypeScript template with a box of scraps. Because I already designed how it would basically look, the biggest issue I ran into while creating the static UI was determining if I should add a submit button. Unfortunately, this is not an April Fool's joke. This UI decision affects how often I will send updates to the API. Is it better to do many small updates or one big update to the API? Said in a different way: How many trips to the grocery store do you want to make? Exactly, one big update with a single submit button would be the most optimal method of updating the API. However, it would also be more cumbersome and dangerous for most people. Yes, dangerous, and I'll explain why.

Building the Backend Core in a Single Weekend

When I'm tasked with creating an API with batteries included as quickly as possible, I fall back on Django. Is it because it's the best backend? Nope. It's because it's the backend that I understand the best and because it's the first web framework I learned. And honestly, if I had to code in a single language for the rest of life, it would probably be Python.

As I mentioned before, the hardest part of setting up the backend was making sure that when I migrate to a PostgreSQL database, Django's ORM can communicate with it through psycopg2.

The backend core features REST APIs that I will need to use for testing data fetching and data fetching techniques on the frontend with Redux Toolkit.

It if weren't for Redux Toolkit, I probably would have used a different state manager. Vanilla Redux without Toolkit is fairly difficult to figure out on a single pass of reading the documentation. Fortunately, I had built a fake Redux replica from a book tutorial prior so I already had good idea on how Redux worked under the hood. I can safely recommend using Redux Toolkit and its data-fetching counterpart, Redux Toolkit Query. State management has been a breeze with Redux Toolkit.

How I Approach My Work Now

As I struggled to fall asleep after a stressful sprint of three consecutive 14-hour workdays, Cal Newport's book, Deep Work, popped into my head. Deep Work is focusing solely on knowledge work without distractions. I've known about it since its inception, but I gave up on it several times in the past due to lack of motivation. I could not possibly sustain my self-destructive work schedule, so I put my phone on Do Not Disturb, I abstained from reading news, emails, or watching youtube videos. And I politely told my family not to disturb me from 8am to 12pm. The general limit for deep work is about four hours. The result: I felt very productive and I was able to finish at least one or two project goals per day.

From these past three weeks, I needed to solve many technical problems, but also human problems like fixing how I approach work. In the future, I'd like to recognize my own personal human problems sooner so I don't get in the way of my work.

5 Tips on How To Create The Perfect Freelancer Profile

Why is it time to move on to ReactJS ?

tieje
Trying to get my first tech job.
How to Get the URL for Pictures
#tutorial #productivity #opensource
Skill Tree Update 4/11/2022
#webdev #productivity #react #redux
How to Delete a Table from a Database in Django
#django #python #programming #tutorial

Once suspended, tieje will not be able to comment or publish posts until their suspension is removed.

Once unsuspended, tieje will be able to comment and publish posts again.

Once unpublished, all posts by tieje will become hidden and only accessible to themselves.

If tieje is not suspended, they can still re-publish their posts from their dashboard.

Once unpublished, this post will become invisible to the public and only accessible to tieje.

Thanks for keeping DEV Community safe. Here is what you can do to flag tieje:

Unflagging tieje will restore default visibility to their posts.