Tidelift's annual managed open source survey explores how technologists use open source to build applications at work. Over 600 people shared how they use open source software today, what holds them back, and what tools and strategies would help them use it even more effectively.

In this post, we share the sixth of nine key findings. If you don’t wait to wait for the rest of the results, you can download the full survey report right now.

We wanted to add some meaning of our own to this crowded pool of data with a few questions about the programing languages technologists rely on most. We started by asking respondents to select the top open source languages their organization relies on, allowing them to choose up to five languages. 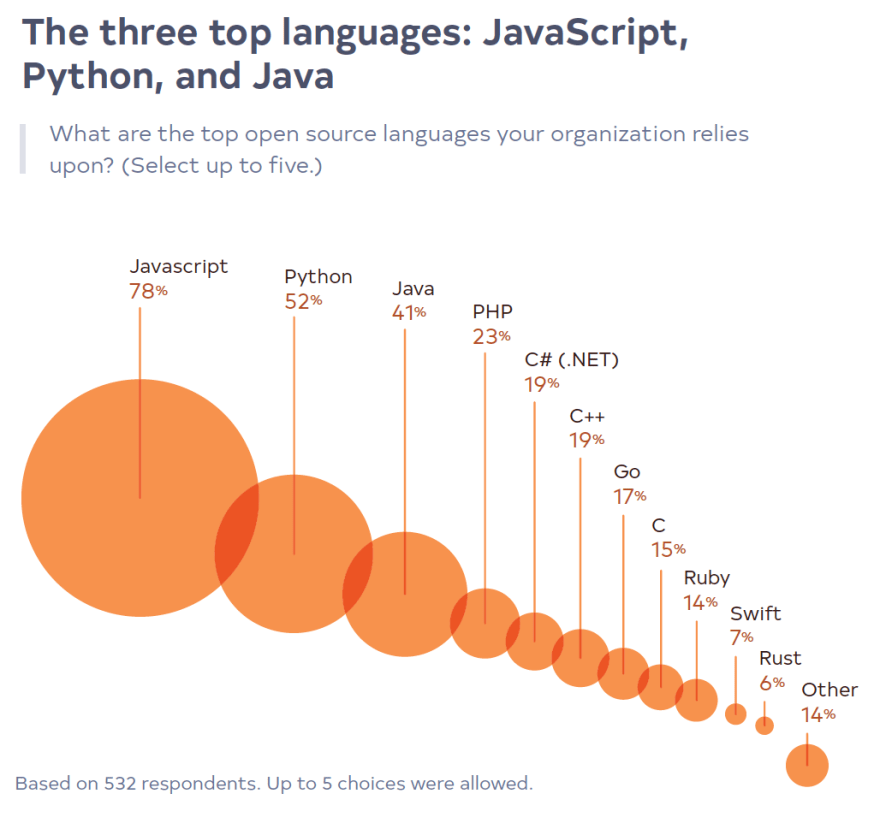 Not surprisingly, the top three languages by far were JavaScript (78%), Python (52%), and Java (41%). In fact, the top five languages reported by our respondents exactly match the most recent RedMonk language ranking from June 2020, with PHP and C# (.NET) ranking fourth and fifth. 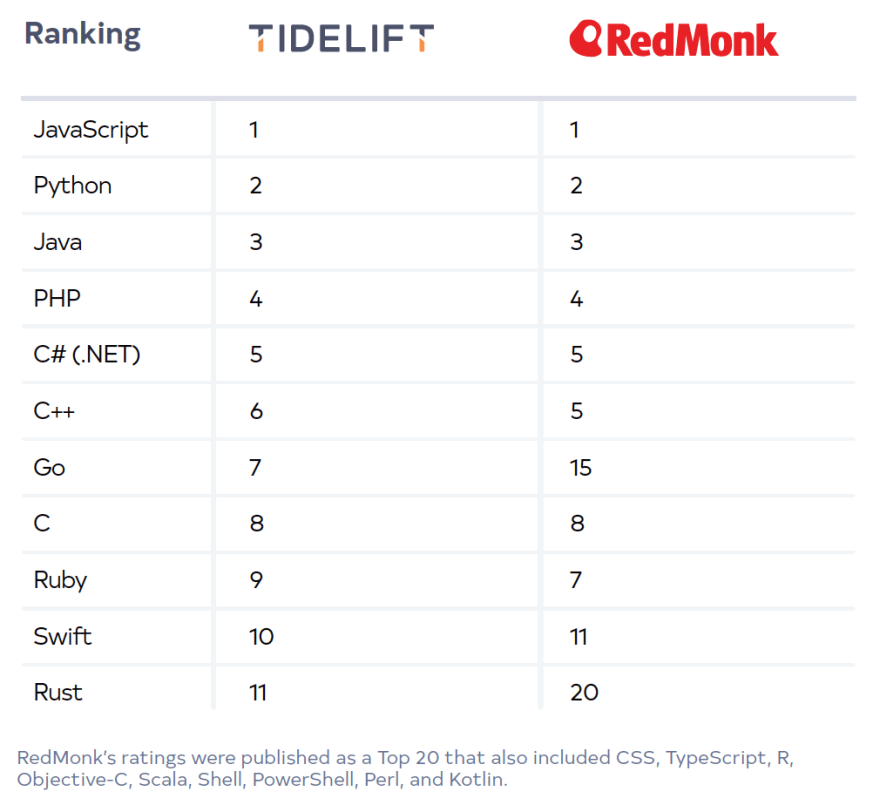 RedMonk’s analysis looked at over 50 languages, of which eight ranked higher than Rust, which by some measures has never been hotter, with TypeScript showing up at #9. The next time Tidelift asks this question, we expect to include TypeScript and Kotlin in the list of languages, as both received many write-in responses in the 2020 version of the study.

Fans of Java often complain that it is underrated in language studies because its use is concentrated in larger enterprises. The survey supports this conventional wisdom, as 66% of organizations with more than 1,000 employees rely on Java, which moves it ahead of Python among this cohort. 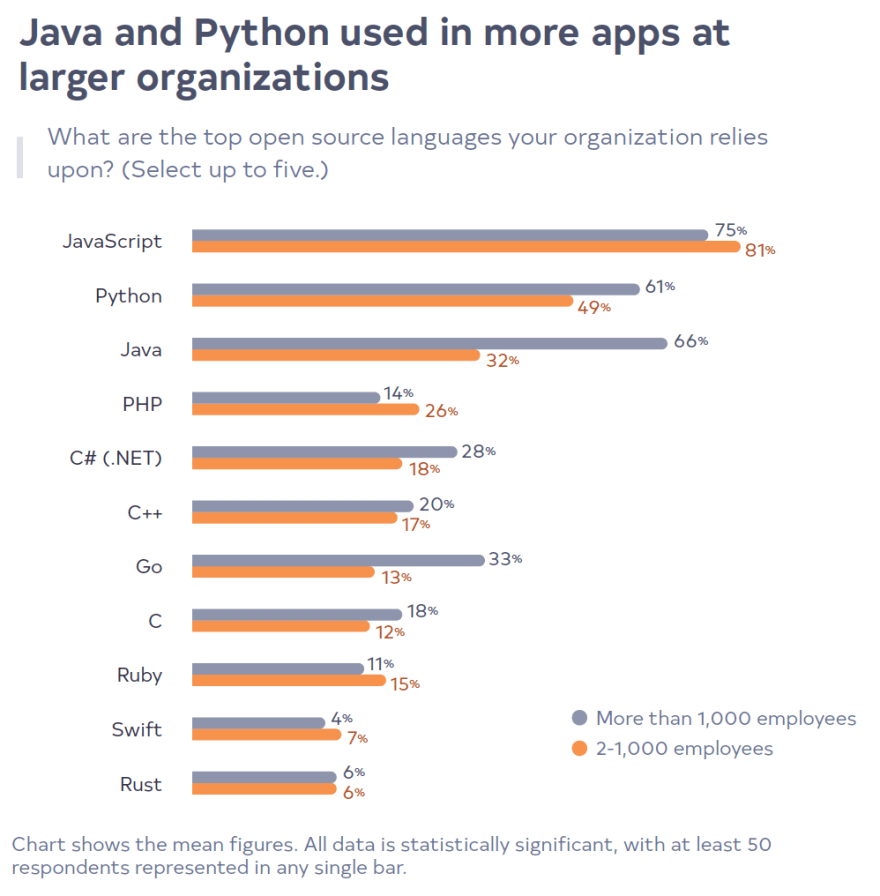 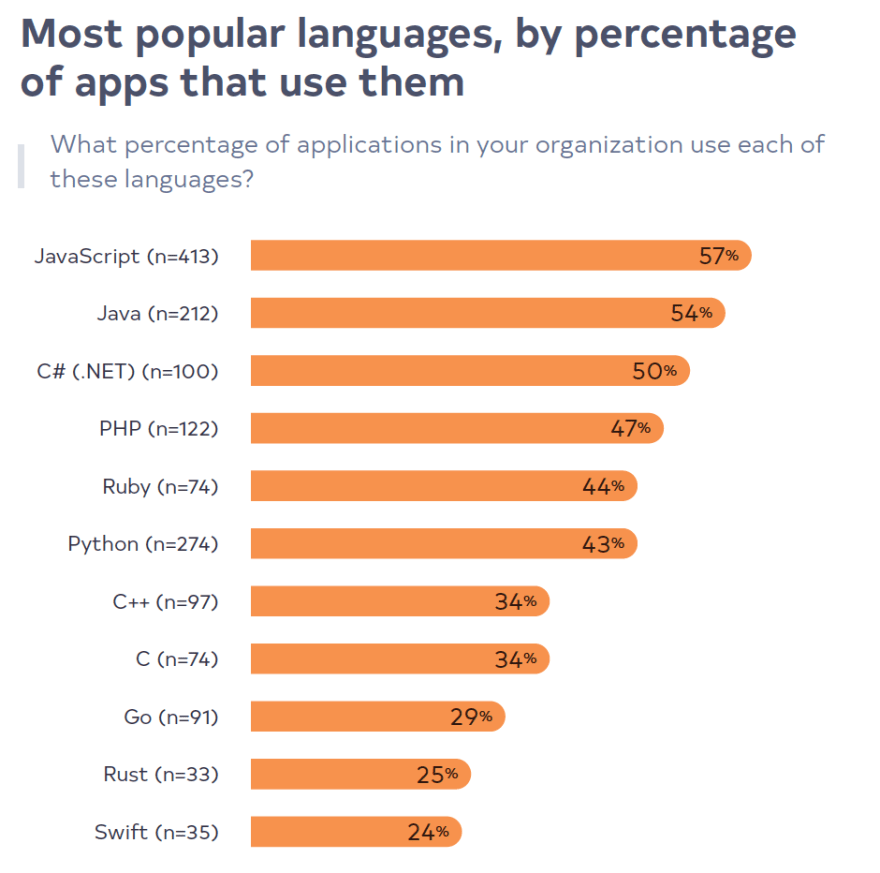 JavaScript stayed in first place, with the average organization using it in 57% of their applications. Java jumped to second place at 54% since it is often an integral part of larger enterprises’ internal applications.

Most notably, C# (.NET) and Ruby improved significantly by this metric at 50% and 41% respectively. Even though the sample sizes are smaller (100 respondents for C# (.NET) and 74 for Ruby), this tells us that the organizations that rely on these languages do so quite heavily.

Older, entrenched languages battle for developers’ attention against new languages with new approaches. The two metrics we are tracking—top languages being used and percentage of applications using each of those top choices—provide valuable data technologists can use to make decisions on which languages are most established, which are gaining momentum, and which are losing momentum.

Want the full survey results in one report? Get them here now.

Read more about how we conducted the survey, see the survey demographics, and learn why we call it the managed open source survey.

A one-day celebration of open source, the developers who use it, and the maintainers who make it.

Once suspended, tidelift will not be able to comment or publish posts until their suspension is removed.

Once unsuspended, tidelift will be able to comment and publish posts again.

Once unpublished, all posts by tidelift will become hidden and only accessible to themselves.

If tidelift is not suspended, they can still re-publish their posts from their dashboard.

Once unpublished, this post will become invisible to the public and only accessible to Chris Grams.

Thanks for keeping DEV Community 👩‍💻👨‍💻 safe. Here is what you can do to flag tidelift:

Unflagging tidelift will restore default visibility to their posts.