When React.js 17 became available on October 20th, it generated some confusion because it has no new developer-facing features.

Instead, the React Core team focused on making the React library easier to self-upgrade in the future. This means, that if your app is running React 17 and you need to upgrade some features to React 18, you can move your application core to React 18 and lazily load the legacy code without any issues.

Of course, you can still upgrade your entire app the new version at once, which is the recommended version by the React team.

To install React 17 with npm, run:

To install React 17 with Yarn, run:

One of the greatest internal improvements React 17 has is the new JSX transform. Prior to React 17, when you write JSX code, it was transformed to a React.createElement call.

Was transformed to this:

Starting on React 17, you don't need to import React from 'react' anymore. Instead, two new entry points were added to the React package that are intended to be used only by compilers like Babel or TypeScript. So for the above JSX code, the output will be slightly different:

So, your app won't need to import React from 'react' anymore. Instead, you can directly write your JSX code:

Next.js was known to allow the above because under the hook, it imported React. However, they changed this in their 9.5.3 release in order to use the new transform.

If you are using the eslint-plugin-react package, you may notice not importing React will generate an issue. For that, you can just disable those rules while they remove those rules.

Luckily, the React team has created a codemod you can run to remove your old React imports. To run it, just open a new terminal on your project directory, and run the following script:

To enable gradual updates , the React team changed its internal Event Delegation System, which works like this:

Before React 17, all event handlers were attached at the document level under the hook, so it ran document.addEventListener() for most events.

After React 17, it attached all event handlers to the root element where you render your app, which calls rootNode.addEventListener() instead.

To better understand how the new Event Delegation System works, take a look at this diagram: 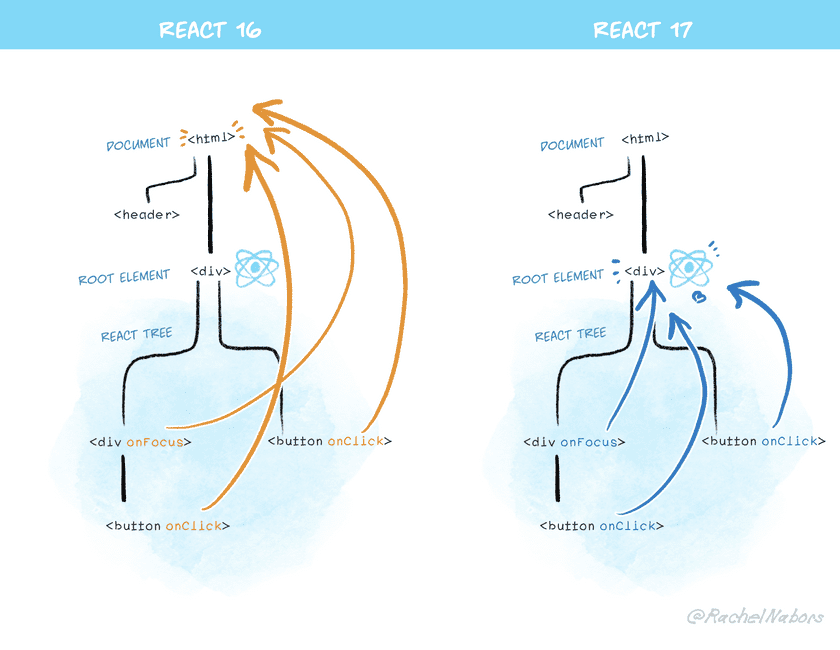 You can take a look at a demo of gradual updates on an example repository put together by the React team.

There are other minor breaking changes that hopefully won't affect your application. They are mostly internal changes, like the onScroll event no longer bubbling, onFocus and onBlur events switching to use the native focusin and focusout under the hook, removing the old event pooling optimization, and making the effect cleanup timing more consistent.

To go deeper into these other breaking changes, you can take a look at the React v17 RC Breaking Changes.

How to set up Font Awesome in React

Build your resume in React + SSG!