There are things we might skip while learning web development from scratch.

Knowing the ins and outs of npm while learning HTML, CSS, JavaScript, and a framework is probably not a good idea. 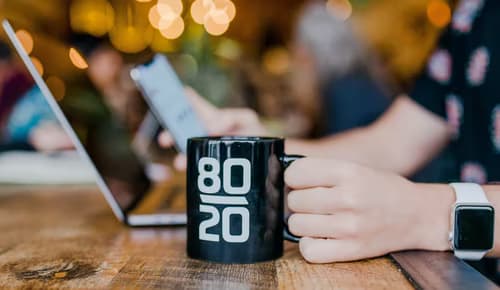 We should focus on the 20% that produces 80% of the outcome rather than spending time on everything else. If you are not familiar with this concept, check out Pareto's priciple.

However, here is a quick tip that could speed up your work when you need to check and update the npm dependencies in a project... that stuff in package.json.

Here is a quick tip to quickly check and update the npm dependencies in our project... that stuff in package.json.

Here is the tip: run npm outdated from the terminal in your project folder to see if the installed packages are outdated.

npm outdated is a built-in npm command and you don't have to install any additional packages for it.

I run npm outdated on some code that I am using for an Angular tutorial, so the outcome for your project might be very different.

However, let's understand the color-coding because it will be the same disregarding the framework you will use.

Short story long:
Despite the outcome of npm outdated you may want to postpone the update. Often, the choice is not black or white, especially in big and complex apps with other priorities.

Also, the npm documentation is a bit more specific on the colors:

According to semver.org:
Given a version number MAJOR.MINOR.PATCH, the:

If there is a new version available and the first number in the version number is different e.g. 4.10.3 I would expect possible incompatibilities.

If the second or third number in the new version number is different e.g. 3.10.6 I don't expect big problems. If anything, it could be a bug fix.

This is all beautiful and nice however you might be surprised by the number of issues you might encounter "for only a small update" in more complex apps.

If you are looking for an easy way, here you go: npm update.

Should you use it? It depends!

Small apps updated frequently can benefit from npm update. You might not get any issues and you are done.

Be aware that npm update doesn't update to MAJOR versions.

Check the tips at the end of the post to see how to update all dependencies, including MAJOR version changes, with a single command.

If you are working on bigger apps that didn't get updated recently, you may want to be careful.
Let's use a stepped approach starting from:

What do "wanted" and "latest" mean?

Let's have a look at my package.json: 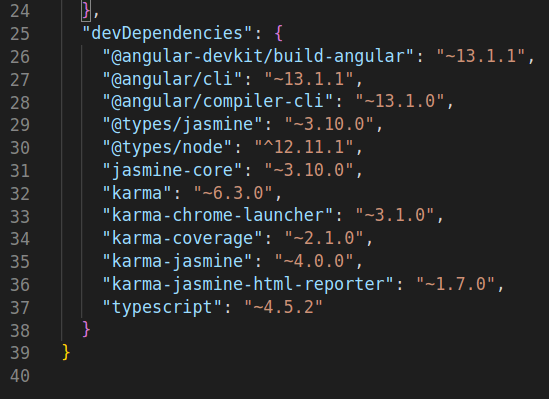 Notice the ~ symbol before the version number of @types/jasmine on line 29:

The tilde (~) symbol indicates that

npm will look for the latest PATCH version (the third number in the version number e.g. 3.10.6) available in the npm registry and install it.

Basically, the tilde declares that "the max npm can update or install is the third number, e.g. the PATCH version". Npm must ignore any minor or major upgrades, respectively the second and the first number.

We know that the latest version of this package is 4.0.3 but that is a major version upgrade and the tilde specifies that npm will ignore that.

Let's proceed and update only @types/jasmine to the wanted version.
The command to update a single dependency is: 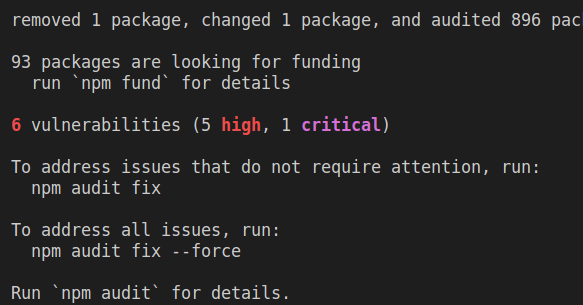 and if I run npm outdated again:

we see that the current version of @types/jasmine corresponds to the wanted version. Good.

Let's have another example with the tslib package.
This time, package.json shows:

The caret (^) symbol indicates that

npm will look for the latest MINOR and PATCH version (the second and third numbers in the version number e.g. 2.4.0) available in the npm registry and install it.

Basically, the caret (^) declares that "the max npm can update or install is the second and third number, e.g. the MINOR and PATCH version". Npm must ignore any major upgrades, the first number.

In other words, since the version in package.json is “^2.3.1“, it can update until version “2.x.x“, where x is the highest minor and patch version available.

The command to install a new MINOR or MAJOR version of a single dependency is:

Since the current version of the tslib package is the same as the wanted and the latest, we won't see this package in the list anymore.

The last thing you need to know is that if the version number has no prefix e.g. "zone.js": "0.11.4" it means that you are declaring the specific version number you want and nothing else.

You may want to check out a tool called npm-check-updates.

From the documentation on GitHub: "npm-check-updates upgrades your package.json dependencies to the latest versions, ignoring specified versions".

Join us as a writer
Wrap your library in a React hook
#react #hook #javascript #typescript
What are Progressive Web Applications? Get started with creating PWA
#webdev #pwa #beginners #javascript
What are the advantages of using Flutter for cross-platform development?
#flutter #programming #beginners #discuss