VS Code v1.69 was released last week. As with any of the previous releases, it came packed with new features. I found some of them to be quite useful and have already used them to tweak my VS Code setup.

In this short post I’m going to show you one new feature that I like in particular - the “Terminal: Run Recent Command” command.

Before we look into what this command does, how often do you use the up arrow key in the Terminal to find a previously executed command? Quite often, right? You remember that you ran one particular command yesterday but you can’t really remember which was it. So you use the up arrow key to go trough the recent commands, one at a time, to find the one you need. I do that all the time too.

What if there was a way to see a list of recent commands and quickly find the one you need. That would be so much better, wouldn’t it?

Here’s where the “Terminal: Run Recent Command” command comes in. When you run it, you get a list of recent commands in a Quick Pick-like panel similar to the Command Palette or Quick Open panel. It looks like this 👇 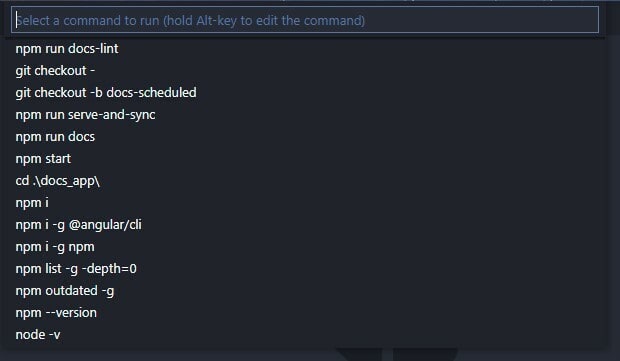 Go ahead and try it. Open a Terminal, then open the Command Palette (Ctrl/Cmd+Shift+P) and run the “Terminal: Run Recent Command” command. Selecting a command from the list will automatically run it.

If you hold the Alt key while selecting a command, the text will be written in the Terminal without running it. This way you can modify it if you need to. You can also search for a command in the input field.

The “Terminal: Run Recent Command” command doesn’t have a keybinding assigned by default. In the release post, an example is given where Ctrl+Space is used for hooking up the command to a keybinding. I used that suggestion in my setup. Works quite well.

You can now use Ctrl+Space to open the list of recent commands when the Terminal is in focus.

I also recorded a short video explaining the post above.

I hope you learned a little tip today. Happy coding 😎

Advice from a career of 15+ years for new and beginner developers just getting started on their journey.

Once unpublished, this post will become invisible to the public and only accessible to Dzhavat Ushev.