I am going to explain the issue and solutions while installing ddev, docker and docker-compose on Mac OS 10.12.6 or older versions.

For the past couple days I was supporting work on the Mautic open source project issue. But because of my older Mac OS I was not able to install PHP's latest version which supports the latest Mautic version. So the community has suggested using ** ddev ** installation to use a virtual environment without worrying about local machine compatibility. But my struggle does not end here. To use ddev prerequisites was to install docker and docker-compose. None of them was compatible with the  Mac OS 10.12.6 version. I struggled a lot no where I found a combined blog where I got a solution to fix the issue, so I thought of writing these steps to solve the issue which can help any other developer who will face this same issue in old Mac OS ( Problem is can't upgrade OS ).

DDEV is an open source tool that makes it dead simple to get local PHP development environments up and running within minutes. It's very powerful and flexible as it per project wise environment. In short, DDEV aims to allow development teams to use Docker in their workflow without the complexities of bespoke configuration. More details can found here

Let's start with steps to installation of ddev, docker and docker-compose

As per document of ddev installation site. We have to run below command

But, it throws an error about not supporting the OS version error. 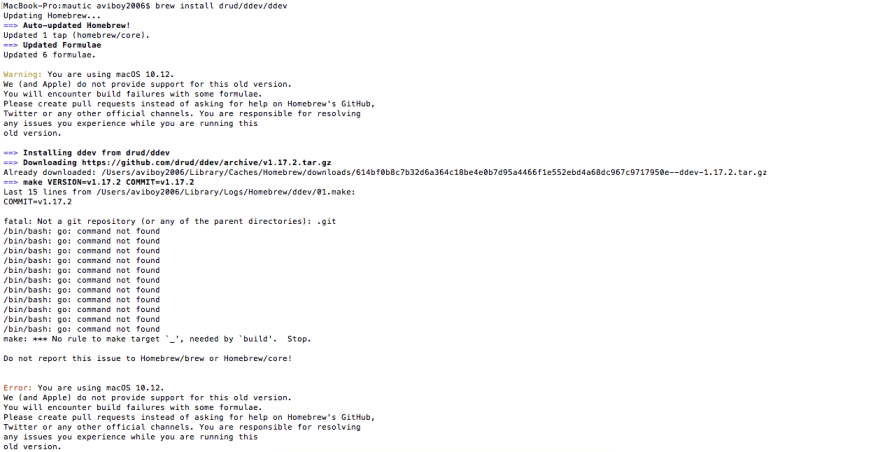 Homebrew does not support your OS version, so you'll need to use the install_ddev.sh technique. See the script installation technique at  https://ddev.readthedocs.io/en/stable/

To install via sh script. You run below script :

Cool ! Installation of ddev is completed. but when you trying to command ddev start it will throw error saying

Installation of docker and docker-compose :

Docker can't be installed directly by installing docker desktop app because it does not support older versions of Mac OS 10.12.6. Then installation steps will be different.

After running brew install docker docker-machine run this below command to link this version. Otherwise your will see error of docker command not found

Make sure while running ddev start docker default image should run. By following these steps docker will not available in Application of Mac OS. because this docker cli installation.

Hope this blog will help you to solve installation issue. If you have query related to you can reach out to me over my twitter handle @aviboy2006

Reference which help me and thank to this references :

My checklist of PHP extensions used in Alpine docker image

Do you use SwiftUI for your Mac apps?

Once unpublished, this post will become invisible to the public and only accessible to Avinash Dalvi.