Working with Angular has its gotchas, but what makes it really a joy to start off, is its language service.

A language service is a program that you feed your code and it will report you completions, errors, hints and diagnostics on a file per file basis, all while making a distinction between syntactic and semantic errors of each file. And that’s what Angular language service does for Angular projects.

How does it help us?

Angular code files end with .ts or .html, so the code editor thinks that we’re writing Typescript and Html code, but that’s not totally true. Because, on top of that we are also writing Angular specific syntax like: components, directives, property/event bindings, etc. And the code editor doesn’t know anything about them.

That’s what the language service does for us, it understands that you’re inside an Angular project and tells the editor what that Angular specific syntax is.

If we have just installed VS Code and open an Angular component with inline template here’s what we’ll see: 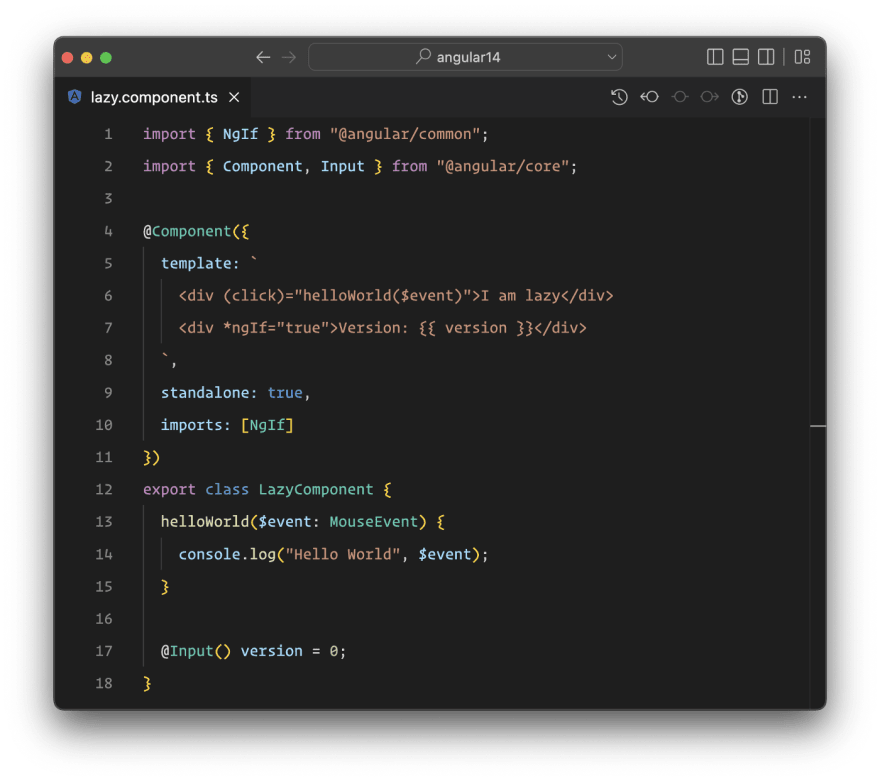 Because the editor thinks that this is a typescript file, it won’t provide code highlight for the template part, and it will be shown just like it was a string, even though the editor has support for HTML (and here we are inside a Typescript file).

The Language Service tells the editor that we are inside an Angular component, and to treat the template field as an Angular template that in fact is HTML with enhanced capabilities (with some gluten over it).

If we install the Angular Language Service and open that file again. We will see something better. 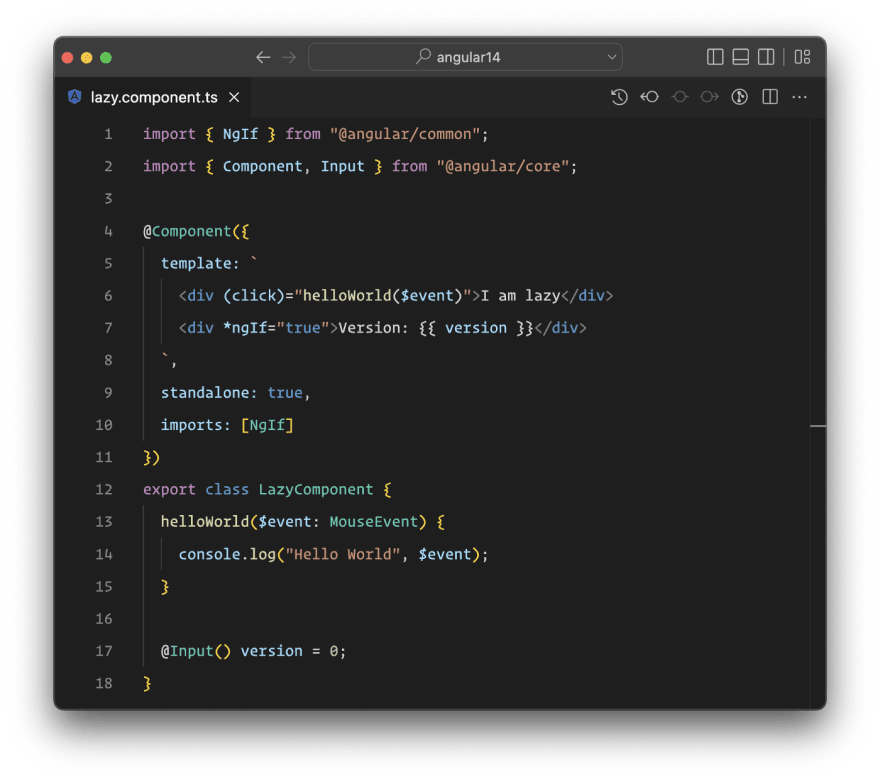 Let’s hover over some of the elements in the template and see what kind of information it provides.

If we hover over the click event we will see that the information is just an addEventListener in the div element (because that’s what that click binding does). 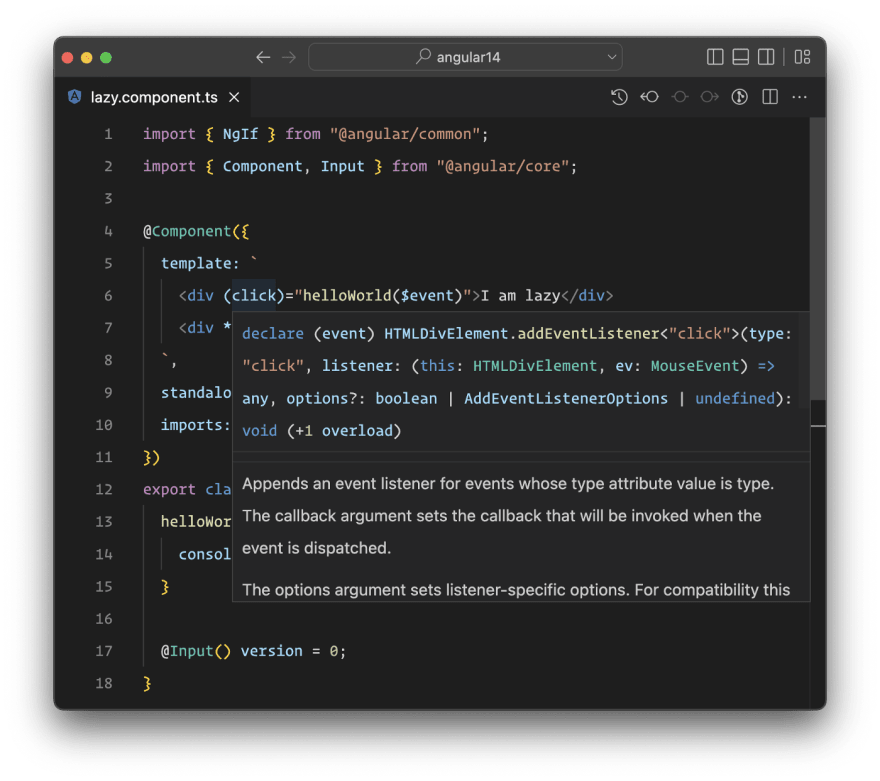 And the type of the $event value is of MouseEvent because that’s what a addEventListener with click event type dispatches. So, no magic 🪄! 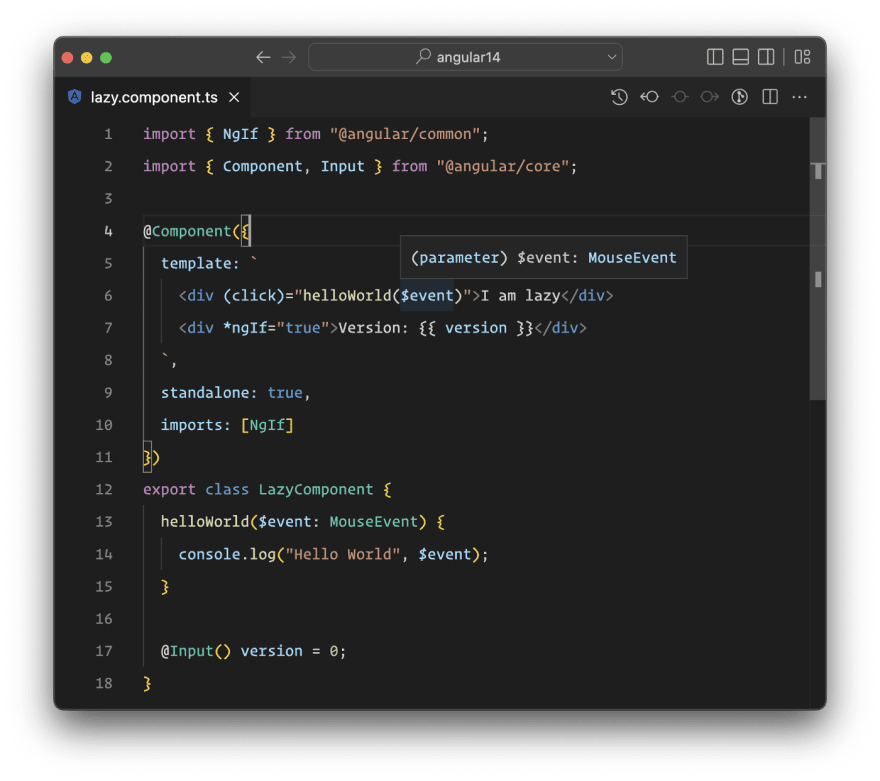 Let’s add a component that has an Output, and add it in the template. 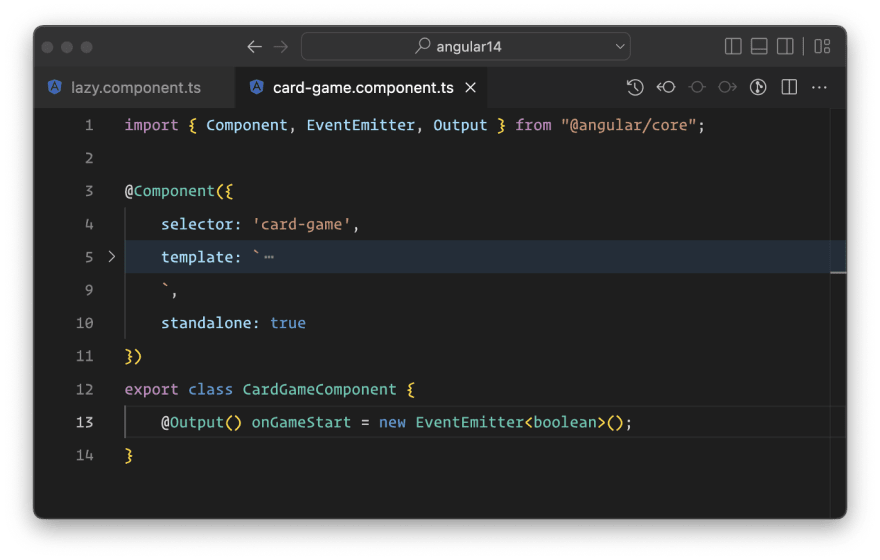 When we hover over the onGameStart event we can see that the it’s just an EventEmitter that emits a boolean value, and that’s right! 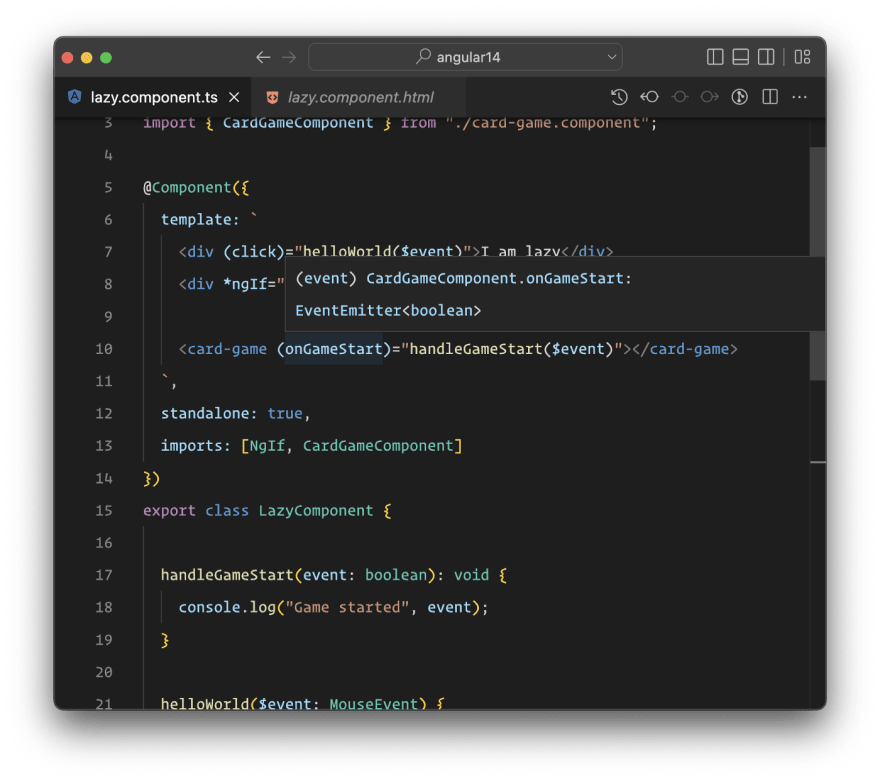 If we hover over the interpolated version variable we can see that the right type will be shown, so version is just a property of the LazyComponent with type number. This also works for complex types.

The reason why everything shows the correct type is because the Angular templates are strictly typed and the language service just uses the Angular Compiler under the hood to get all this information. 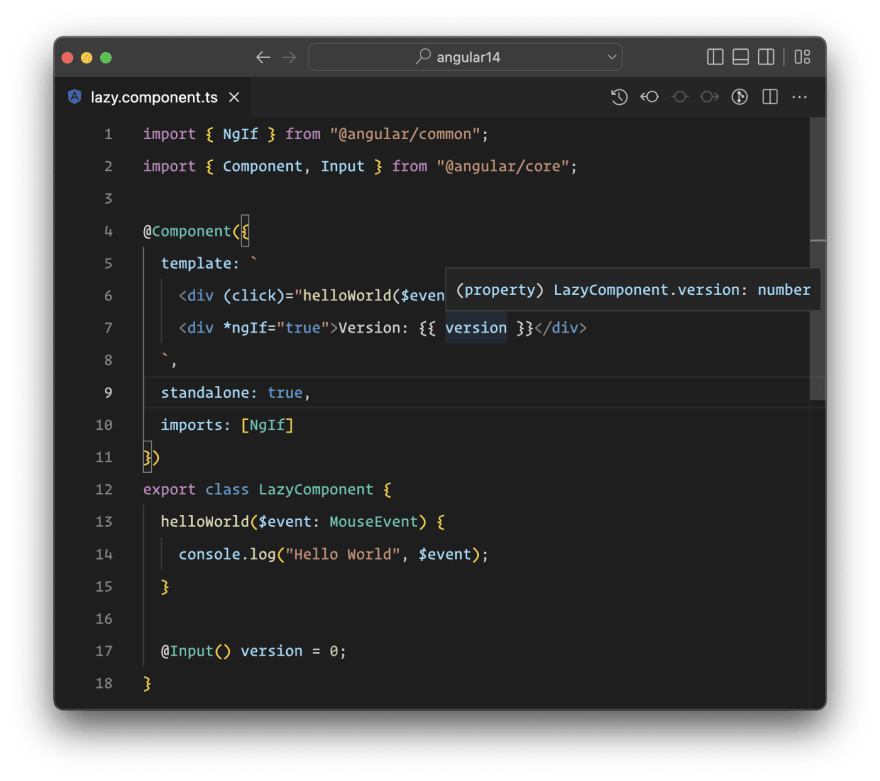 Let’s add an Input to the component we created before and pass some data to it from the LazyComponent. 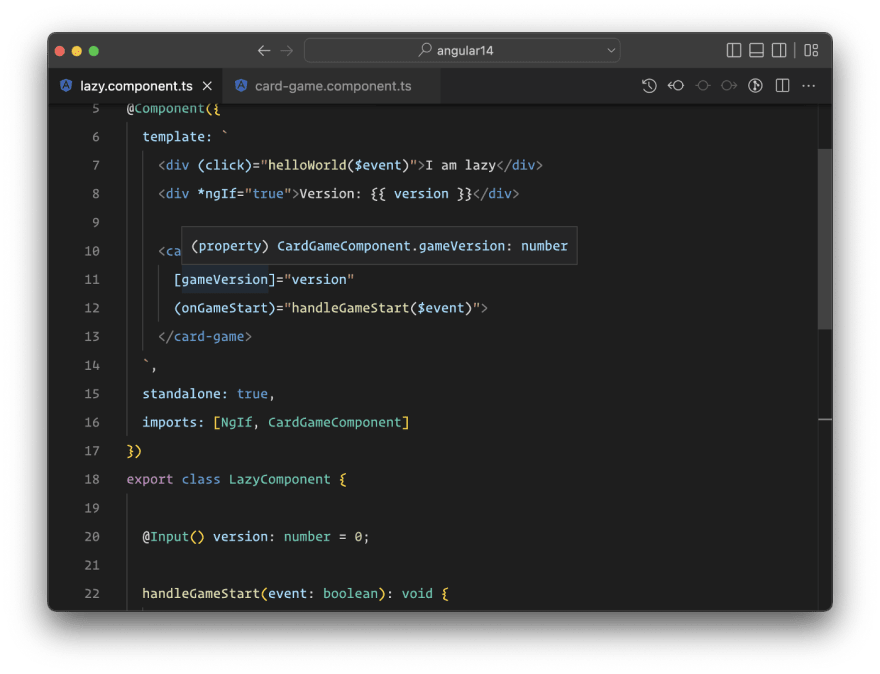 Let’s change the property on LazyComponent to be of string type and see what we get: 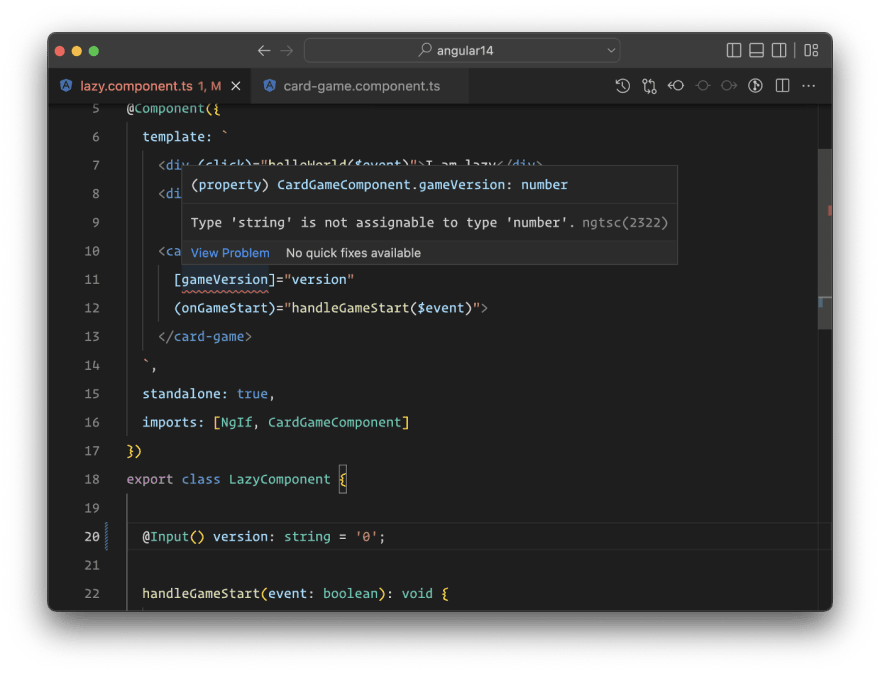 Yes, we’ll get an error that tells us that the property we are passing has a wrong type from the one that the input requires. 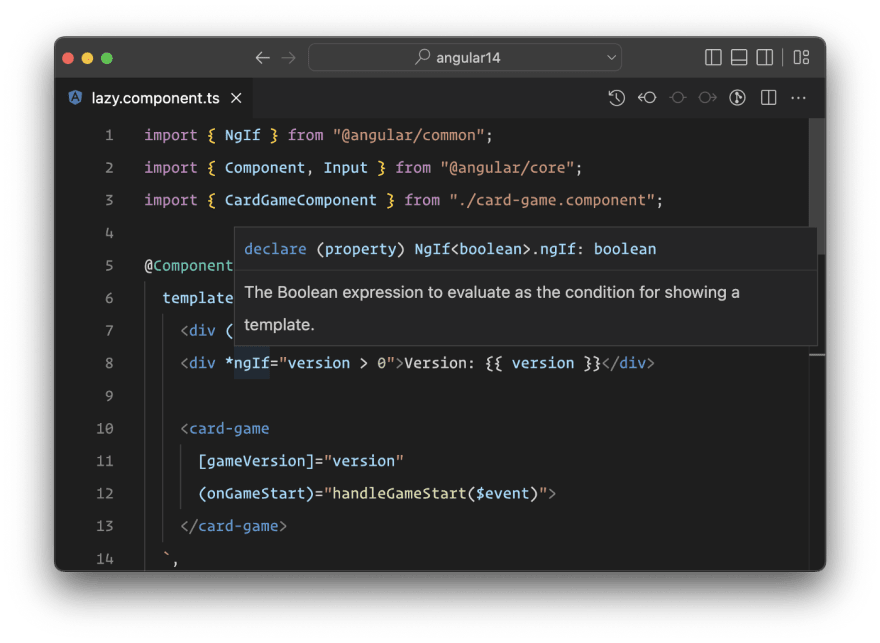 Let’s add an NgFor directive and see what information the editor gives us.

Yes, it will show us that the directive class is NgForOf and the generic types of it. Great so far! 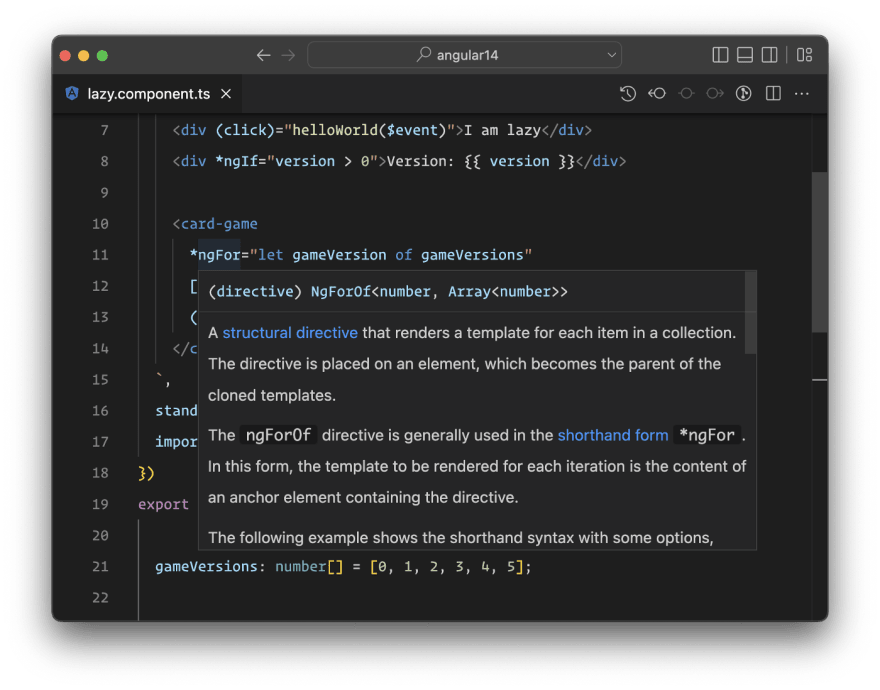 These are some of the informations that the language service provides us!

We can right-click on every item in the template and click on Go to definition and it will send us there! Be it a component, directive, input, event, DOM element etc.

As we can see it will send us to the correct place, whether it is inside our components, directives, the ones provided by Angular, or the types of DOM elements, like lib.dom.ts etc.

We can also use the Go to references option and it will show us every place where we have used the item that we searched for!

Because everything is Typescript in Angular, we can use the Rename symbol in the template and all the references of that symbol will be renamed. Be it inputs, outputs, class properties or methods etc.

Rename symbol functionality will not work 100% correctly if we do it from the inside class and not from the template, because there’s an issue in VS Code itself that is not solved yet!

If we start writing stuff on the template the language service will provide VS Code autocompletion data that we can use, be it inputs, outputs, events, class properties etc.

In the latest version of the Language Service, we can make use of code fixes. We can create properties or methods directly from the template, or fix stuff that we may have written in a wrong way.

As we can see it will create the method and also pass the type of the event that we pass to that method, in this case it was MouseEvent.

Angular language service has come a long way! It was re-written from the ground-up because of the Ivy compiler and it was worth it! Because now we have all this good stuff that wasn't possible before.

There is a lot of cool stuff coming too, like importing components, directives, pipes for Standalone components but also for NgModules.

Till then, go install the language service (if you haven’t yet) and use it to the fullest, it has a lot to give and make your coding easier!

Once unpublished, this post will become invisible to the public and only accessible to Enea Jahollari.