Do you do this? 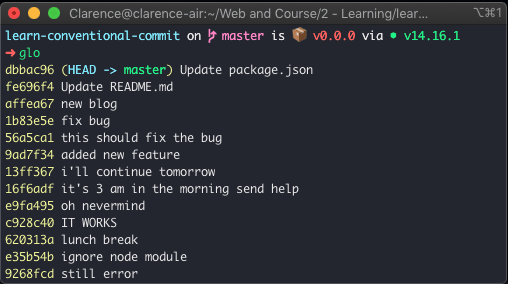 Stop. Even if you are working alone and nobody reads your commit, you're eventually going to forget your 3-month-old project.

"Was the X feature added?", "Did I fixed the hamburger menu bug?".

You can't really know what feature you are adding, or what bug you are fixing not until you jump into the code to check what changed. Imagine you work as a team, and you have to review 10 commits that are not descriptive, so you need to read the code and the logic on that PR.

The guideline of a descriptive commit message is you should at least know what were you working with just by reading the commit message. The convention is usually using imperative sentences, and present tense.

Even without looking at the code changes, you can generally know what is going on.

By spending 10 seconds to decide what descriptive commit message that we should use, we can save up minutes of looking up code changes in the future.

At the first step, we can infer what is going on by looking at the commit message. But, we have to read the full sentence to know if it was a feature that is added or removed, a bug that was fixed, or a package that was installed. Isn't it nicer if we can recognize the function of the commit just by the first word? Also, there are some people that like to use emojis to differentiate. You can if you like, but I'm trying to minimize mental mapping.

Let's say that we have these categories—only a small example, you can add more categories if you need to:

Our last commit can improve into this:

In this step, we can be more effective when differentiating commit. We can skim commits and find what category we are looking for.

Let's say you are creating an NPM package, and you need to generate a Changelog for your users so they are aware of the changes. For instance, you can look up your git log, and copy all commit message that is in feat and fix category. This 2 category is the most used when creating a changelog because your user doesn't really need to know that you remove unused import, or adding a semicolon to code because you forgot.

ps: when doing a normal project, you can add more categories to the changelog if you want.

Handpicking those is grunt work, and nobody wants to do it if you have a bunch of commits. That is why we can use standard-version to generate the report.

We can easily run a command, and it will automatically bump the version, generate changelog, commit, and add a tag to our project.

Here is the report that is generated only using our commit, we can also specify what categories we want to include.

But, there is a catch when we are using an auto-generate package like standard-version. We need to follow certain rules so the standard-version program is not confused. Let's proceed to step 4.

Conventional Commits is a specification for adding human and machine-readable meaning to commit messages.

This set of rules will help us create a good commit message that we can easily read, and can be auto-generated into a changelog. I usually put up this markdown in the readme file, so others can follow it too. Feel free to read up my summary and copy it to your projects.

Still, read the guide on their website, it is more comprehensive there.

Using that set of rules will guarantee a working changelog. But still, whether the commit message is going to be meaningful, it is on you.

If you are working with some new developers in your team, they might not fully know this convention. While you can give this blog to them 😉, it is a great practice to add a linter for your project, so no one can mess up the commit message.

This will enforce the use of conventional commit for your commit message.

Check out this post to add Commitlint using Husky

We learn that we should use a more descriptive commit message, add some category to it, use Conventional Commits rules as a guide so we can generate changelog, and add Commitlint so we can't mess it up.

How React Works Under The Hood